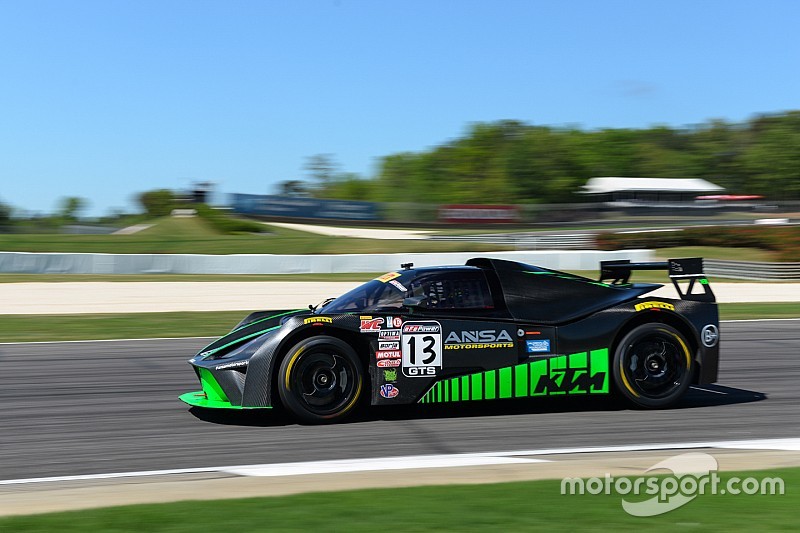 Sandberg didn’t put a wheel wrong, and crossed the line with a 2.3sec advantage over the Maserati GranTurismo of Jeff Courtney, while the SIN R1s of Scott Heckert and Jade Buford completed the top four.

The winner’s job was made somewhat easier following a tangle on the opening lap between the second-, third- and fourth-placed qualifiers, namely Martin Barkey in an XBow, Heckert, and Scott Dollahite’s Lotus Evora.

While Barkey and Dollahite never recovered, Heckert put on a stunning charge that culminated in him passing teammate Buford on the 19th of the 22 laps. However, he was still 4.3sec shy of Courtney, who fought a long battle with yesterday’s winner Derek DeBoer in the Aston Martin Vantage, finally getting past on Lap 15, but running out of laps and possibly tire life to make a serious go at hunting down Sandberg.

De Boer would tumble to eighth in the closing laps, falling victim to Anthony Mantella’s XBow, which had been in the thick of a race-long battle with two other hard-chargers – Max Riddle in an Aston Martin, and Lawson Aschenbach in his Camaro. This latter pair charged to sixth and seventh from 17th and 18th respectively.

Ernie Francis Jr.’s Ford Mustang ran as high as third in the early stages, taking full advantage of the first-lap snafu, but he ultimately dropped to ninth, his fastest lap a full two seconds shy of the race’s fastest lap set by Heckert on Lap 17.