The hard work was rewarded with a top-five finish for Peter Cunningham on Friday and a well-deserved top-10 for Nick Esayian on Saturday. 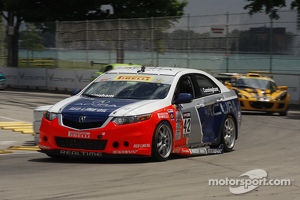 Thursday – Qualifying: RealTime celebrated Independence Day with a qualifying session for Round Eight of the Pirelli World Challenge GTS Championship.

Friday – Race 1: At the start of Friday’s 48-lap race, Cunningham immediately picked up a position and moved into sixth place, sandwiching Steve Goldman’s Porsche Cayman S between himself and Esayian. Though it looked like Cunningham would have a race-long battle with the Cayman, traffic allowed the Acura ace to build a comfortable margin.

That margin was erased on lap 30 when a full-course caution was issued for a particularly scary moment for the RealTime team. While running ninth, the left-front wheel on Esayain’s car failed in one of the fastest parts of the 1.53-mile circuit, the downhill into Turn 7.

“I had a vibration on the downhill coming onto the main straight and within a second or two, the left-front wheel decided to leave the car,” recalled Esayian. “I was probably going about 110 there. I had no steering, no brakes and just drove it right into the wall.

Fortunately, the RTR guys build a pretty stout car, because we went through all the barriers, including the Armco and the post behind the Armco to the cyclone fence. That car has certainly been in better condition. I’m okay. I’ve got a sore chest, but that’s about it.”

Esayian’s race was done, but Cunningham carried on when green flag racing resumed on lap 36. Goldman was able to get around the No. 42 Acura briefly, but Cunningham was back in sixth, three laps later. He picked up one more spot in the closing lap hustle and collected a top-five finish.

“All we could do was keep pushing and doing our best,” Cunningham said. “I had my hands full holding off the Cayman, who was really turning up the heat on me. He got by on the restart after the yellow flag, but he struggled in traffic, so I was able to get by. Then, one of the Lotus cars got pushed off the track and I moved into fifth just in time for the checkered flag.

“I was glad to see Nick out of the car as I went by the accident, so I knew he was okay and could communicate that to the team. It was easier to get the job done on track knowing he walked away on his own.”

Another race began as soon as the checkered flag fell – the race to fix Esayian’s car in time for Saturday’s race. The RealTime crew worked heroically through the night to make repairs, and shortly before midnight declared the No. 34 would be ready to race in the morning.

Lawson Aschenbach won Friday’s GTS race in a Chevrolet Camaro, followed by another Camaro with Andy Lee behind the wheel and Jack Baldwin in a Porsche Cayman S.

Saturday – Race 2: The grid for Saturday’s race was set by fastest laps from Friday’s event. This put Cunningham seventh in the starting order and Esayian 10th.

At the start of the 47-lap race, it appeared that Saturday was going to bring a much more positive outcome for RealTime, as Cunningham successful avoided a small GTS coming together at the start and slotted into fourth on the opening lap.

“I got by Wilkins’ Kia, Goldman’s Cayman and Andy Lee’s Camaro,” Cunningham said. “They slowly climbed back and picked me off one-by-one and I fell to seventh, before the full-course caution came out.”

Cunningham dispatched Lee and Goldman again after the restart and found himself back in fourth after the early exit of the No. 60 Lotus Exige driven by Tom Long.

With a podium just one spot away and eight minutes remaining in the race, Cunningham focused on holding off Lee’s hard charging Camaro, but lady luck turned her back on the No. 42 and the RealTime crew was called into service once again.

“It was shortly after the restart that I began to feel a vibration,” Cunningham recalled. “We had a puncture which rapidly turned into a flat tire, forcing me to pit. It was a tough break after we’d been moving up through the field so well.”

The RealTime crew made the change as quickly as possible and sent the No. 42 back out on course, but with the lost time, a promising start ended in a 13th-place finish for Cunningham.

“Lime Rock has historically been kind to RealTime,” Cunningham said. “We’ve scored eight World Challenge wins at this track, but this definitely wasn’t our weekend. Thankfully, we have the hardest working team in the Series, and they did everything in their power to keep Nick and I in the hunt.”

Esayian also had a fantastic start, moving up to seventh, but having to come from farther back in the field, traffic played an issue through his whole race.

“The car was amazingly sorted and I ran a strong seventh,” Esayian recalled. “Then, I got stuck behind someone that was a lap down and in spite of all the discussions about not racing cars on the lead lap, he kept me at bay for nearly 16 laps.

“After the restart when the gaps were closed, Alec Udell and another GTS car followed a GT Audi on the inside of me in Turn One. Tough to swallow, only tougher as that lapper I struggled to get by pulled over and let them drive away, but pulled right back in front of me, trying to race me. A frustrating day.”

Esayian’s challenging race ended in a 10th place finish; disappointing for a driver who knew the car had more in it, but a sigh of relief for the RealTime crew who had hustled to put the car back together the night before.

Baldwin won the race in his Porsche Cayman S, followed by Aschenbach’s Camaro and the Kia Optima of Mark Wilkins.

The enhanced broadcast of the Lime Rock Grand Prix will air on NBC Sports, Saturday, July 20th at 4 p.m. ET.

RealTime doesn’t have much time to rest before Round 10 of the Pirelli World Challenge GTS Championship at the Grand Prix of Toronto, July 12 - 14. The team is looking forward to the Canadian street course where it has scored three wins since the World Challenge series began taking part in the event in 2007.

Cameron to make Acura debut in an NSX