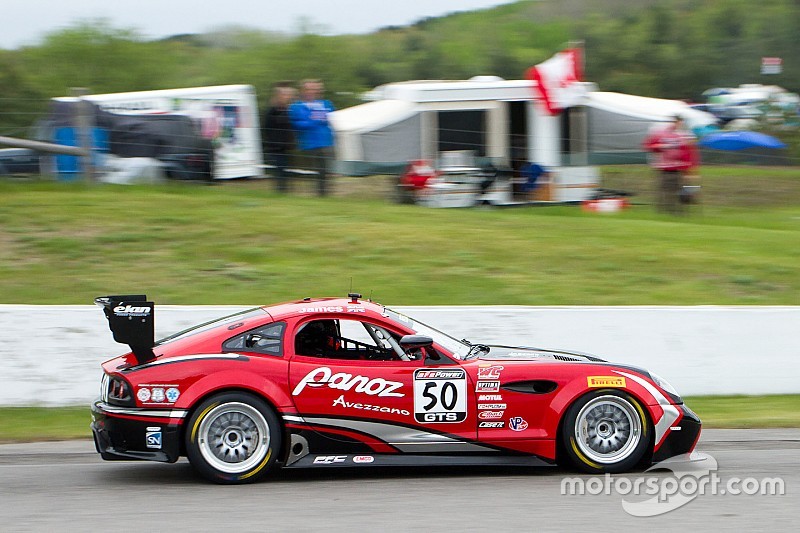 Ian James's Panoz Avezzano held off Lawson Aschenbach's Chevrolet Camaro to clinch a second win in two days, in a race that was halted early due to debris caused by a shunt for Touring Car racer Samantha Tan.

Another Porsche suffered, however, Cody Ellsworth’s machine getting shoved into the pitwall at the start, bringing out a full-course caution.

At the restart, James drew level with Baptista but couldn’t make it work at Turn 1, , but down toward Turn 5, the Panoz was in front and soon Baptista was struggling to hold off Aschenbach’s Camaro. Out of the Kink, the muscle car had the grunt to get past leaving Courtney’s Maserati and top Amateur George Kurtz (McLaren 570S) to try and pass the Cayman.

Austin Versteeg’s KTM X-Bow, which had gotten past Stacy’s Porsche on the restart, moved past Gottsacker’s Ginetta on the run out of the Carousel on Lap 5, and on Lap 7 he passed Kurtz for fifth. Now he started trying to close down on the Baptista/Courtney battle, while on Lap 8 Stacy dismissed Gottsacker.

Courtney finally got around Baptista into Turn 1 on the outside, but now lay 5sec from Aschenbach, and 6.8 behind leader James. Later that lap, Versteeg too demoted the Porsche to fifth. But Courtney’s charge lasted less than a lap – he lost it under braking for Turn 14, skated over the sandtrap and buried his Maserati’s nose in the tire wall, bringing out the full course yellow.

The restart with 12mins remaining saw Versteeg stumble losing five positions by Turn 5. Aschenbach clung onto leader James and now had Baptista filling his mirrors, followed by Kurtz, Stacy, and Ernie Francis Jr. in the Ford Mustang, up from 22nd on the grid. At Turn 3, the Mustang snatched fifth from Stacy, passing him around the outside in a very brave maneuver.

Then came news that Baptista would get a drive-through penalty for jumping the restart, just as the full-course yellow, then red, then checkered flag flew for a Touring Car-class crash. Samantha Tan’s BMW M235i had made heavy impact at the Kink.

The time penalty for Baptista thus meant that in GT Pro, James doubled up on Panoz victories, ahead of Aschenbach and – although results remained very provisional after a confusing ending – the remarkable Francis in third ahead of Stacy and Gottsacker.