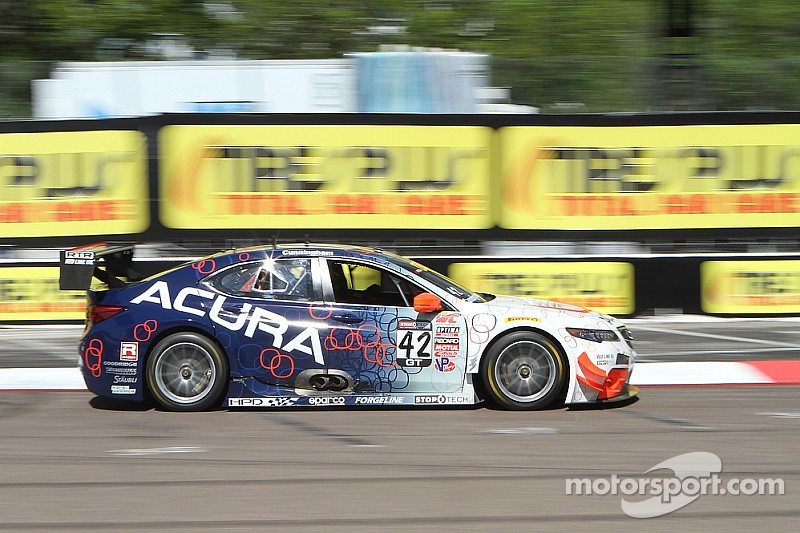 The Acuras of RealTime Racing are approaching the halfway point of the 2015 Pirelli World Challenge season, and will head to Canadian Tire Motorsports Park (CTMP) this weekend looking to build on a six-race streak of top-10 finishes in the GT class.

Ryan Eversley started the streak with four top-10s in his #43 RealTime Racing Acura TLX GT, a stretch that included a victory at St. Petersburg back in March. Team owner and series’ all-time victory leader Peter Cunningham picked up the baton from there, scoring a season-best eighth-place finish at Barber Motorsports Park on a weekend in which he scored top-nine results in both events.

The 2.458-mile CTMP layout, formerly known as Mosport, has been a staple of the sportscar racing scene since 1961, hosting Can-Am, Formula 5000 and even Formula One racing. The 10-turn track located in Bowmanville, Ontario, Canada also provided a test for a rookie racer named Cunningham 30 years ago, back when the RealTime Racing owner was getting his fabled road-racing career underway.

“I first started racing here in 1985, so I guess this is my 30th anniversary!” said Cunningham about the track that last hosted the PWC cars in 2012. “It’s been a few years since we’ve competed at Mosport, so it’s great to have another opportunity to race at such a wondrous and historic track.”

Eversley has been a consistent force at the sharp end of the grid through the first seven rounds of the Pirelli World Challenge campaign, and sits fourth in the series standings, holding a 55-point advantage over the fifth-placed Lamborghini Gallardo of Nick Catsburg. He looks to rebound from a frustrating weekend at Barber, where late-race contact blunted potential top-five finishes in both races.

"I always look forward to racing at Mosport. It's such a fast and daunting track and always has a great fan turnout,” Eversley said. “Mosport is a real ’driver’s track’ so if we can keep it clean and stay out of trouble, I imagine we could get another pair of top 10s!"

Pirelli World Challenge qualifying takes place Friday at 3:05 p.m. ET, setting the grid for Saturday’s eighth round of the season, which gets the green flag at 1:15 p.m. Sunday’s Round Nine event gets underway at 3 p.m. ET. The 50-minute races can be seen live on the Internet at www.world-challengeTV.com. The tape-delayed race broadcast can be seen May 24th at 5 p.m. ET on the CBS Sports Network.

Developed from the 2015 production Acura TLX by HPD and RealTime, the Acura TLX GT features HPD chassis and aerodynamic performance parts approved for Pirelli World Challenge competition. It is powered by a direct-injected, twin-turbocharged V6 engine, developed by HPD from the production TLX, and will utilize all-wheel drive, as found in Acura’s SH-AWD system.

Ferraris atop GT-A podium in Barber