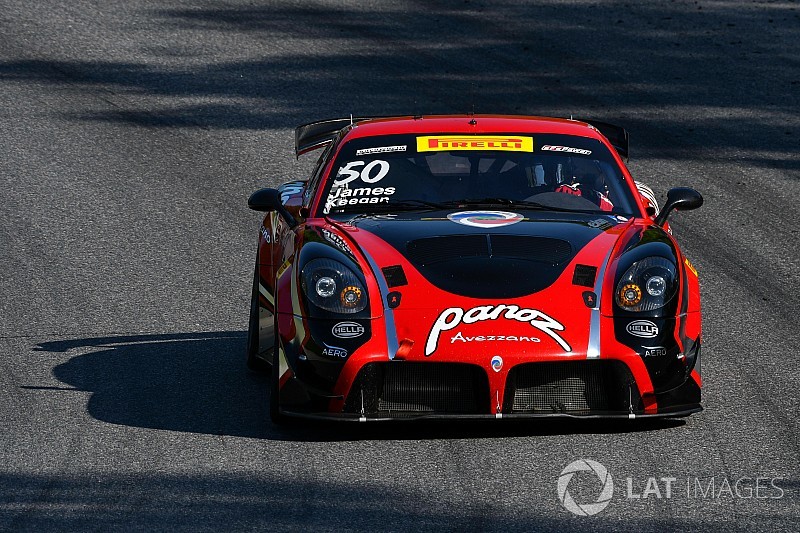 A fascinating late-race duel between the Panoz Avezzante of Ian James and the SIN R1 of Harry Gottsacker was resolved in the former’s favor with less than two minutes on the clock.

Polesitter Harry Gottsacker took the lead from the start, but the other Racer’s Edge SIN R1 of Mark Pavan which had started alongside him collided with Scott Maxwell’s PF Racing Ford Mustang, causing both of them to drop to the back.

That left Gottsacker holding a comfortable lead over Brett Strom in the Classic BMW M4 (leader of the Amateur category), with Matt Keegan third in the Panoz Avezzano, Moritz Kranz in the Muehlner Motorsports Porsche Cayman, and Gregory Liefooghe – up from 11th on the grid in the BMW M4 run by Stephen Cameron Racing.

However, Andy Pilgrim in the Blackdog Speedshop went in the opposite direction in the first couple of laps, dropping from sixth on the grid to 10th, behind Toby Grahovec in the second Classic BMW, Mike McAleenan’s Maserati Gran Turismo, Drew Stavely’s Ginetta and Alex Welch in one of GMG Racing’s Audi R8s.

That was the Top 10 when the first yellow flew on Lap 9 when Pavan had a second collision at the chicane at the end of the pitstraight, this time with Mark Klenin’s gorgeous but now terminally damaged McLaren 570S which spewed fluid around the left-handed apex of the triangular chicane.

Following the compulsory pitstops, Gottsacker (driving solo) found that his fiercest challenger (as at Road America) was the Panoz, now with Ian James at the wheel. Eight seconds further back, Lawson Aschenbach had worked wonders to get the #1 Blackdog Camaro up to third.

Strom unfortunately missed the pit window, so co-driver Daren Jorgensen would face a drive-through penalty, allowing Michael Cooper, replacing Tony Gaples in the second Blackdog Camaro, to race up into fourth ahead of James Sofronas now installed in the #14 GMG Audi, and Stavely’s Ginetta.

James kept hunting down Gottsacker until with 12mins to go, James was starting to duck and dive in the SIN’s mirrors to unnerve his opponent. However, he took his time and on Lap 38 with 1min40sec to go, he drafted Gottsacker down the front straight. As they both moved right to pass a backmarker, James went further to the right still and the Panoz cleanly outbraked the SIN into Turn 1. James would inch away to win by a mere 0.357sec.

Aschenbach’s Camaro was third but finished 12sec behind this duel, ahead of stablemate Cooper, with Sofronas’ Audi fifth ahead of the Classic BMW M4 of Stevan McAleer and Justin Raphael which had risen from 23rd on the grid.