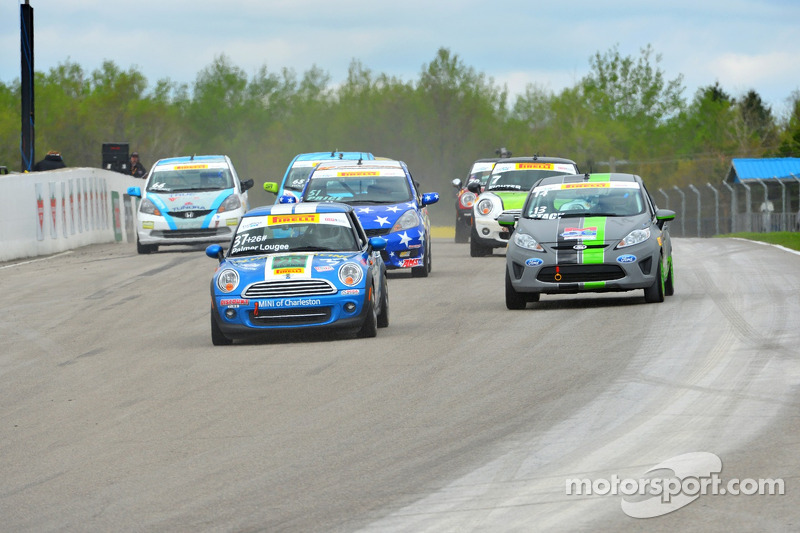 The 25th Anniversary of the championship, sees the series in two places this weekend of May 30 through June 1.

Millville, N.J. – The 2014 Pirelli World Challenge season, the 25th Anniversary of the championship, sees the series in two places this weekend of May 30 through June 1.

While the GT, GT-A and GTS divisions are racing on the streets of Detroit, the Touring Car (TC), new Touring Car A class (TCA) and Touring Car B-Spec class (TCB) have a doubleheader weekend as the series makes its return to New Jersey Motorsports Park for the first time in five years.

Thus far Honda has dominated the TC class, but action has been intense between both series veterans and up-and-coming young drivers in the TCA and TCB classes. Rounds 5 and 6 of the season for these three classes on the 14-turn, 2.25-mile Thunderbolt Raceway road course should play out in similar fashion to the opening rounds of the year.

Pirelli World Challenge TC: DiMeo, Saini both with something to defend

Interestingly, two drivers have a chance to keep their winning streaks alive in New Jersey. First-year driver Michael DiMeo, of Toronto, has opened the year on an absolute tear, with four consecutive victories for Compass360 Racing. He goes for numbers five and six this weekend in the No. 71 Grand Alarms Honda Civic Si.

The other driver who can extend his streak is Jason Saini, of Chicago, who won the lone Touring Car race held at NJMP in 2009. Saini can make it two-for-two if he takes the Round 5 win in the No. 28 OMP/Motovicity Mazda MX-5; he won in a MAZDA6 in 2009, so a victory this weekend would bring things full circle. 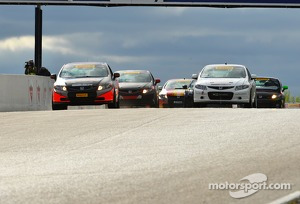 DiMeo's teammate is C360R team principal Karl Thomson, also of Toronto, in the No. 72 CTF.org/Touge Tuning/Racing4Research Honda Civic Si. Thomson finished third in Round 4 at Canadian Tire Motorsport Park for his first podium finish of the year, and currently ranks second in points, albeit some 255 points behind DiMeo (596-341).

Two drivers make their series debut this weekend. Graduating from the Mazda MX-5 Cup ranks is young Emilee Tominovich, of Laurel, Md., in the No. 19 Emich Racing Volkswagen Jetta GLI. Tominovich spent two years in MX-5 driving for CJ Wilson Racing and just graduated from The Catholic University of America only a couple weeks ago; making her Pirelli World Challenge debut is quite a nice graduation present.

The other driver making his debut is Kevin Anderson, of Huntington Station, N.Y., in the No. 23 TechSportRacing.com Mazda RX-8. Anderson is the 2013 Spec Miata Pro IT Champion and has more than a decade of SCCA regional experience; he lists NJMP as his favorite track and hopes to visit a Pirelli World Challenge podium for the first time.

Hale Motorsports adds a pair of Mazdas to the class, in the form of Randy Hale, of Haddam, Ct. and Stan Wilson, of Mount Julien, Tenn. Hale will drive the No. 83 TransAero Mazda MX-5; he last competed in the series at Lime Rock Park last July and finished fifth in the second of three races there that weekend. Wilson, in the No. 84 Resinate Materials Group/Wilson & Wilson CPA/NetEvidence Mazda MX-5, makes his his first start of the season.

Rookie Jason Wolfe, of Mount Vernon, Ohio, took just two race weekends to find his groove in the Pirelli World Challenge. After a third-place in Round 1 at Barber, Wolfe won Rounds 2 and 3, and finished second in Round 4 during the three-race weekend at Canadian Tire Motorsport Park. The driver of the No. 36 Wolfe Trucking Kia Forte Koup holds a 137-point lead entering the weekend (504-367).

Second in points is another rookie named Jason, Jason Cherry of Gambrills, Md. in the No. 13 Autism Society of America/Avpro/Purposeful Architecture Mazda MX-5. Cherry's pace has not yet translated into results; he suffered poor luck and some mechanical issues during the Canadian weekend, but did post the fastest race lap in both Round 3 and Round 4. He could be next to win this year.

Third and fourth in points, tied on 346, are the two other winners in TCA, Round 1 winner Shea Holbrook and Round 4 winner Ernie Francis Jr. Holbrook, of Groveland, Fla., also fought through a challenging weekend in Canada in her No. 67 TRUECar/Lucas Oil/Radium Honda Civic Si, as points penalties were assessed to her after both Rounds 3 and 4. Still, there was plenty good to take away from the weekend as she finished on the class podium in each of the three races, made several impressive passes and set the fastest race lap in Round 2.

Francis Jr., of Dania, Fla., made a late-race pass of Wolfe in his No. 98 Breathless Performance Mazda MX-5 to take the Round 4 win. He'll look to make it two-in-a-row in Round 5. Despite missing Round 1, he can easily jump into second in points this weekend.

Neal de Paz, of Ormond Beach, Fla., is set to make his first 2014 start in the No. 5 NDP Motorsports Honda Civic Si. Meanwhile a second Grid-1 Motorsports entry, the No. 97 Motovicity/Grid-1 Motorsports Mazda RX-8, is currently entered with a driver to be announced. The No. 97 entry has had two different drivers in as many weekends thus far in 2014.


Each of the three TCB races at Canadian Tire Motorsport Park featured a first lap lead change, followed by that driver leading the remainder of the race from there en route to victory. It was a far cry from Round 1 in Barber, although the winner was the same for two of the three races north of the border.

Brian Price, of Middletown, Va., in the No. 51 Unlimited Performance/RP Racing Honda Fit, took Rounds 2 and 3 wins and finished second in Round 4 to complete a near-perfect weekend. Price leads the TCB class championship with 547 points.

The emerging star of the class, and first to dethrone Price in 2014, is 14-year-old Nathan Stacy, of Owasso, Okla. in the No. 14 MDG/Ford Racing Ford Fiesta. Price led all of Round 4 and won by more than 24 seconds to become the youngest winner in Pirelli World Challenge history. He now sits second in points, 120 behind Price, after a weekend where he finished fourth, third, and first in three races.

Another driver who you'd bet on as a possible win contender is Tyler Palmer, of San Diego, Calif. in the No. 37 MINI USA Mini Cooper. Palmer's first 11 series starts have netted 10 podiums and two wins – he looks to add to both of those this weekend.

Perhaps the most heroic efforts of the CTMP weekend in TCB belonged to the Shea Racing crew of PJ Groenke's No. 66 entry, which was both a Honda Fit and later, a Mini Cooper. Groenke, of Toronto, had an accident early in the weekend that required parts from another Fit to help fix his Verax.ca/Tundra/Mulligan Gold entry. Once repaired, unfortunately mechanical demons struck the car; Groenke then was able to utilize Scott Kuhne's 4R Motorsports Mini Cooper for Round 4, and secured his second career series podium with third place.

Groenke will be looking for a more conventional weekend in New Jersey. Teammate Paul Holton, of Tallahassee, Fla., continues to impress and develop behind the wheel of the No. 65 Radium/TRUECar/Lucas Oil Honda Fit, and showed very solid race craft in a three-way battle with Groenke and Lougee for a podium position in Round 4 in Canada. Holton has finished in the top seven in each of the first four races, and ranks fifth in points, just ahead of Groenke.

Breathless Performance has Jason Fichter, of Jupiter, Fla. contending in TCB with the No. 7 Surf Fire & Security Mini Cooper. Fichter finished second in Round 3 for his first career podium and sits fourth in points entering the weekend.

Three other veterans are entered in class. Jim Cleveland, of Brisbane, Australia had a career day in Round 4 with a fifth place in the No. 78 Downunder Motorsports Mini Cooper. Kuhne, of Surprise, Ariz., is listed to drive his No. 00 FIAT USA/Pirelli Tire/SRT Motorsports FIAT 500. Lastly Dave Rosenblum, of Langhorne, Pa., seeks to make his first start of 2014 in the No. 18 Leo & Tommy's Mens Store/VAC/Rotary Lift Ford Fiesta. At Rosenblum's most recent series weekend at Mid-Ohio 2013, he scored a TCB podium finish.

Four other rookies round out the 13-car class. Austin Snader, of Fulshear, Texas, returns after a fifth place finish at Barber in the No. 99 SR Enterprises FIAT 500. Kuhne's Mini returns to the track with Tom Noble, of St. Louis Park, Minn. in the No. 24 4R Motorsports/West Real Estate/Hawk Brakes Mini Cooper. Andrei Kisel, of North Vancouver, B.C., has a rebuilt No. 57 Racing.ca/LaptopScreen.com Mini Cooper after heavy contact at the outset of Round 2 at CTMP. Lastly Marc Boily, of West Chester, Pa., will drive the No. 27 ModSpace Mazda2 for Hale Motorsports.