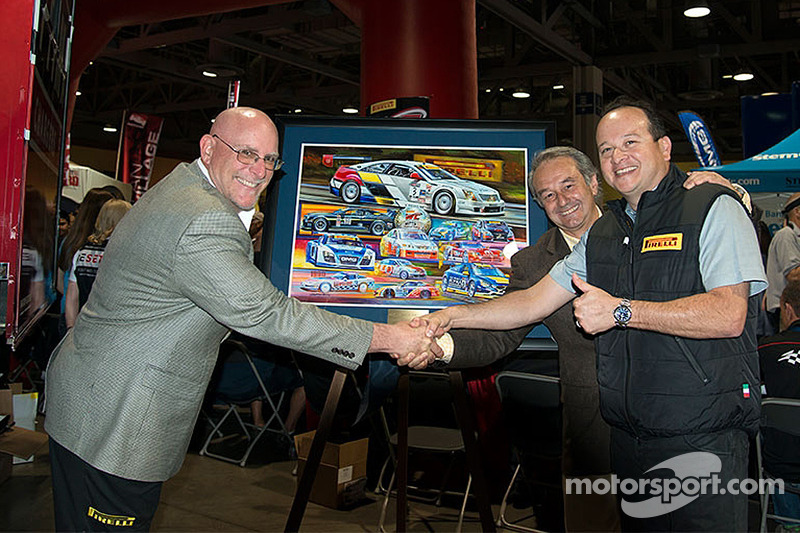 The Pirelli World Challenge is celebrating 25 years of racing in 2014.

LONG BEACH, Calif. – On Saturday, a special painting created for the Pirelli World Challenge Championships' 25th Anniversary was unveiled. The watercolor painting, in partnership with Pirelli, was created by California artist Hector Cademartori, and features a number of historic Pirelli World Challenge race cars that have competed over the last 25 years. A poster created from the painting was handed out to fans during Saturday's driver autograph session for Round 2 of the season, The Roar By the Shore Presented by Kia, in Long Beach. There are plans for distribution of the poster at future autograph sessions throughout the rest of 2014.

"Pirelli is an enterprise deeply rooted in tradition and motorsport, we have been racing for 107 years and enjoy the opportunity to celebrate this milestone accomplishment with our partner WC Vision ," said Rafael Navarro, VP Communications, Media Relations & Motorsports. "We are proud of our title sponsorship with Pirelli World Challenge and Hector Cademortari has done a marvelous job of capturing the style and passion of the series with this piece of art."

"One of the things that World Challenge has captured, more than any other series, is to present a field in which you have several manufacturers in all classes, that have equal opportunities to fight for the win," Cademartori said. "I have always thought that the type of racing that World Challenge presented was great, was real racing with close competition. Now to create a painting for the 25th Anniversary, it was an honor."

Starting with the inaugural series champion, R.K. Smith in a Chevrolet Corvette in 1990, through the four class champions in 2013: Johnny O'Connell in a Cadillac CTS-V.R (GT), Lawson Aschenbach in the Blackdog Speed Shop Chevrolet Camaro (GTS), Ryan Winchester in the Compass360 Racing Honda Civic Si (TC) and Robbie Davis in the MINI of Charleston Racing Mini Cooper (TCB), there's a wealth of memorable cars and drivers on the print.

Seven-time series champion Peter Cunningham, arguably the most successful driver in series history, is featured prominently in the RealTime Racing Acura TSX. Cunningham holds most series records since the series' inception, and moves into the GT class later this year at Detroit with the new Acura TLX GT.