Taking his third straight podium and fourth in six rounds, Andrew Palmer has been provisionally moved to third in the championship rankings.

DETROIT - Continuing a podium streak that began with a win one month ago in Birmingham, Global Motorsports Group (GMG) driver Andrew Palmer took third place honors during yesterday’s second Pirelli World Challenge round of the Chevrolet Detroit Belle Isle Grand Prix. Taking his third straight podium and fourth in six rounds, Palmer has been provisionally moved to third in the championship rankings, leading the field of all Audi entrants.

“This definitely rounded out a great weekend for us,” stated Palmer. “We knew the Cadillacs would be tough to beat on their home turf, and maximizing points was critical to us in the championship. After a very rough Friday, I’m glad the team’s hard work paid off with a series of podiums this weekend. I don’t feel like we could have asked for any better. We will return to a permanent road course at our next event, and our car really comes to life at those circuits so I’m looking forward to it.”

Starting the race from third by virtue of his fastest lap in the previous day’s race, the 19-year old once again made a great getaway as the green light flashed. Making a brief run at the second place Cadillac, the strength of his opponent over the No. 21 Spyder / The Thermal Club Audi R8 LMS ultra was clear, with the Cadillac traditionally proving very strong over Detroit’s bumpy surface. 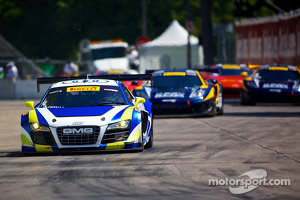 Settling in to a rhythm, Palmer found himself in a fight with another Audi, the No. 2 of Mike Skeen, who gave chase throughout the event. When an extended caution would come out during the early stages of the race, Palmer’s experience in tire management meant he would make a strong effort to maintain heat in his tires as the field slowed, and when the green flag dropped he would do an excellent job of keeping the more experienced Skeen behind him, securing his podium when a late race caution came out to effectively end the race.

Beyond securing his fourth podium and third-place ranking in the points, Palmer has now taken the top Audi result in five of six events.

Continuing a relatively quiet weekend was driver and team owner, James Sofronas. Setting the sixth fastest lap time in Race One, the driver of the No. 14 Mobil 1 / The Thermal Club / Spyder Audi R8 LMS ultra would begin from the third row, gaining one position after a strong start. As the race wore on, Sofronas would find himself in a three-way Audi battle for the podium between Palmer and Skeen, negotiating traffic and doing his usual job of managing his tires for a long race. Unfortunately, the extended yellow in the middle of the race would put Sofronas in a defensive position once the race resumed, doing his best to keep the hard charging No. 61 Ferrari 458 of Anthony Lazzaro behind him. With six laps to go, traffic would hold up Sofronas, allowing Lazzaro the opportunity to pass and relegating James to six.

Finishing a clean series of races, the team owner can not only take pride in setting the fastest lap among Audi entrants in Race Two, but also knowing that he’s assembled such a stellar team. 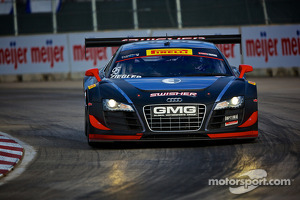 “We gave it a good run today, but circumstances didn’t go our way to finish higher,” stated Sofronas. “The car was excellent, the guys did a fantastic job of getting it ready after such a difficult Friday. It was fun mixing it up with Andrew and Mike, however, you never want to be the one who clashes with your teammate or another Audi competitor, so I was just biding my time for the end. Unfortunately, the yellows sort of caught us out and with our tires and traffic it was tough to keep Anthony behind me. At the end of the day, sixth is about where we were this weekend and Andrew’s mega run is really showing the quality of this organization. On a personal note, I’ll look back at this weekend with fondness for the incredible effort the GMG guys put forth this past weekend. They were thrown many challenges and they stepped up to every single one.”

Following his first Pirelli World Challenge podium during Race One, Bret Curtis would have a more subdued Race Two taking sixth place in the GT-A category. With the extended yellow period taking away one of the Audi’s strengths in a long run, Curtis did his best to keep pace with the other marques in front of him. Opting to preserve his No. 32 Spectra Resources / United Steel Supply / Valspar machine, Curtis would eventually settle into his pace and take satisfaction in another top ten.

“Obviously a podium is much more enjoyable, but in general this was a great weekend,” stated Curtis. “I have to give a lot of credit to the crew this weekend. They went a long way toward working with me to diagnose the set-up and get a car that was suited to my liking, and that went a long way toward this weekend’s results. I’m headed to the airport with my first trophy from this series, so I’m walking away very satisfied.”

Finally, Bill Ziegler continued a consistent weekend by taking eighth in the series’ GT-A category. Ziegler, who had never driven at this course in Audi machinery, continued his improved form in the No. 95 Swisher Racing machine by running his best lap times of the weekend and maintaining contact with the category front runners to take another strong finish.

“There’s always so much going on at this track, I’m happy to walk away with a clean car and a strong finish,” stated Ziegler. “So much of racing here is about surviving, and the team has done a great job of giving me a car that can get us through it as well as helping to coach me and really bring out the best results we can.”

With a busy summer season ahead, the Pirelli World Challenge will return to action in three weeks’ time heading to the historic Road America circuit in Elkhart Lake, Wisconsin. As only the second permanent road course the series will have visited this season, the GT3 spec cars such as the Audi are looking forward to a circuit that should suit their vehicles.

Bentley Motors back on track this weekend with Dyson Racing

Front row for Ferrari at Daytona

Palmer closes Monterey weekend with domination in the second race