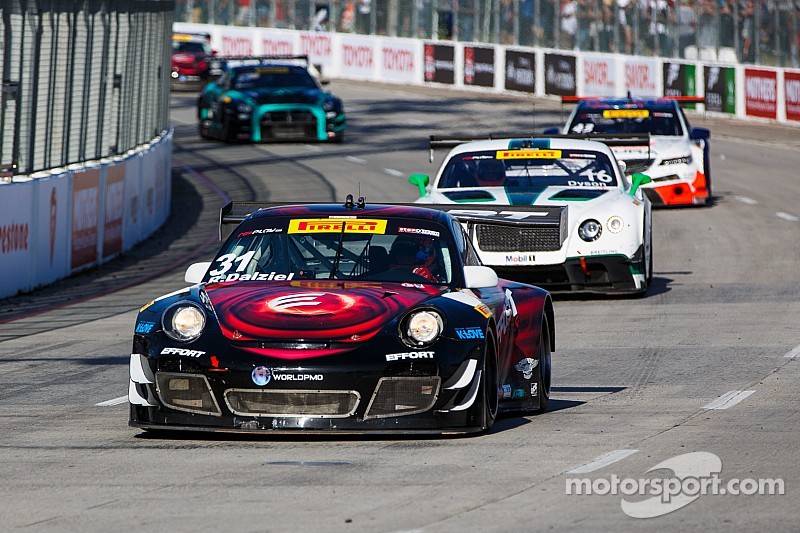 Birminghan, Ala. – The Pirelli World Challenge's GT, GTA, GT Cup presented by MOMO and GTS classes, make a return visit April 24-26 to the 2.38-mile, 17-turn Barber Motorsports Park road course. Over 60 drivers across the four classes will compete in the MOMO Grand Prix at Barber Motorsports Park presented by Porsche. GT, GTA and GT Cup drivers will compete in Rounds 6 and 7 of the championships, while GTS competitors will race Rounds 5 and 6.

This year marks the second consecutive season Pirelli World Challenge competitors will race at Barber – 2014 marked the first appearance for the series at the track. New winners in GT, GTA and GT Cup will be crowned this weekend while last year's winners in GTS (Wilkins and Baldwin) look to get back on the top step at Barber.

Coming off a heated battle on the Streets of Long Beach with protagonists Ryan Dalziel, Kevin Estre and Johnny O'Connell, Olivier Beretta, of Monte Carlo, in the No. 61 Ferrari of Ontario/Toronto/Alberta Ferrari 458 GT3 Italia, continues to lead in GT drivers' points (522) after scoring his third win in five races in Round 5.

He holds a 28-point lead over Dalziel, of Windermere, Fla., in the No. 31 EFFORT Racing/World PMO Porsche 911 GT3 R (494). Dalziel has three runner-up finishes, a third and a fourth place finish in five races. Both Beretta (one career start) and Dalziel (five career starts) have previous experience at Barber in other sports car series.

Estre, of Lochau, Austria, enters the weekend third in points in the No. 9 K-PAX Racing with Flying Lizard Motorsports McLaren 650S GT3, with 398. Estre will be making his Barber debut, and looks to add his second win of the season this weekend.

Ryan Eversley, of Atlanta, Ga. in the No. 43 RealTime/Acura Motorsports/HPD Acura TLX-GT enters the weekend fourth in points after scoring a 6th at Long Beach, and will make his second career series start at Barber where he made his series GTS debut last year in a Subaru.

Their respective teammates, Robert Thorne, of Littleton, Col. in the No. 6 K-PAX Racing with Flying Lizard Motorsports McLaren 650S GT3 and Peter Cunningham, of Milwaukee, Wis. in the No. 42 RealTime/Acura Motorsports/HPD Acura TLX-GT, look to build on best finishes of 10th and 9th thus far this season.

O'Connell, of Flowery Branch, Ga., will seek to put a tough Long Beach race behind him and secure the first win for Cadillac Racing's new Cadillac ATS-V.R. The driver of the No. 3 Cadillac was vying for the win at Long Beach with both Beretta and Estre, only to have contact between the three end his day.

O'Connell's teammate, Andy Pilgrim, of Boca Raton, Fla., in the No. 8 Cadillac Racing Cadillac ATS-V.R, recorded a 5th and a 7th in the two races last year at Barber. O'Connell finished 2nd and 3rd in the two rounds at Barber last year.

Nicky Catsburg, of Voorthuizen, Netherlands in the No. 25 Blancpain Racing Lamborghini Gallardo R_EX/Blancpain, returns to the series after missing the Long Beach race and will look to improve his 6th overall place in the GT Championship standings. Catsburg has two poles, two fastest laps and two podiums apiece to open the season, while he still seeks his first race win.

Mike Skeen, of Charlotte, N.C., in the No. 2 DeVilbiss/Hawk Performance Audi R8 LMS ultra comes off a frustrating Long Beach where a mechanical issue kept him from starting in Round 5. Skeen recorded a 5th and a 3rd at Barber last year.

Bentley Team Dyson Racing heads to Barber after a bitter sweet Round 5 at Long Beach. Chris Dyson, of Pleasant Valley, N.Y. scored his first career Pirelli World Challenge podium with a great second place drive behind the wheel of the No. 16 Bentley/Breitling/Mobil1 Bentley Continental GT3. Dyson's teammate Butch Leitzinger, of Rebersburg, Pa. in the No. 20 Bentley/Breitling/Mobil1 Bentley Continental GT3 did not fare as well after his car sustained heavy damage after being hit from behind. The damage forced him to retire from the race. Leitzinger has one career win in another sports car series at Barber, while Dyson makes his first start at the track.

GMG Racing's James Sofronas, of Villa Park, Calif., in the No. 14 GMG Racing/Spyder/Mobil 1 Audi R8 LMS ultra comes into the weekend after having finished a very respectable season-best 7th in Round 5 at Long Beach having started 21st on the day.

The 15-driver GT field is rounded out by Duncan Ende, of Los Angeles, in the No. 64 Merchant Services Ltd./Linospresso USA Ferrari 458 Italia GT3.

Michael Lewis, of Laguna Beach, Calif., has opened his GTA campaign with four wins and a second in the No. 41 EFFORT Racing/Curb-Agajanian Porsche 911 GT3 R. Lewis sits first in GTA and 8th overall in GT points heading into his first career start at Barber.

Henrique Cisneros, of Miami, in the No. 30 MOMO NGT Motorsport Ferrari 458 Italia GT3 enters Barber with two third-place finishes in his last four races. He enters the weekend second in GTA points.

Mexican driver Martin Fuentes, of Mexico City, in the No. 07 Scuderia Corsa Ferrari 458 Italia GT3 finished second in GTA at Long Beach; he enters the weekend 4th in GTA points. Bryan Heitkotter, of Fresno, Calif., will be in the No. 05 Nissan GT Academy Nissan GT-R NISMO GT3.

Despite being caught up in a Round 5 incident in Long Beach, Colin Thompson, of Doylestown, Pa. persevered to score his fourth win in five starts. Thompson will look for more in Rounds 6 and 7, again behind the wheel of No. 11 Porsche of Bucks County/Penn Valley Constructors/Sherwin Williams Automotive Finishes/Austin Hatcher Foundation Kelly-Moss Motorsports Porsche 911 GT3 Cup.

Lorenzo Trefethen, of Napa, Calif., who heads into his first Barber start in the No. 13 Trefethen Family Vineyards Porsche 911 GT3 Cup sits third in GT Cup standings heading into Barber.

Victor Gomez Jr., of San Juan, Puerto Rico in the No. 81 Porsche San Juan Porsche 911 GT3 Cup scored his best finish of the year at Long Beach with a third in class.

Dean Martin, of Westland, Mich., comes into Rounds 5 & 6 leading in the GTS Drivers' Championship with 426 points on the strength of three top 5 finishes and a win at St. Petersburg. All of Martin's five career Pirelli World Challenge wins have come on street courses. Can Martin break through this weekend and score his first road course win? He will pilot the No. 50 Rehagen Racing/Picture Cars East Ford Mustang Boss 302. Teaming with Martin will be up-and-coming sports car racer, 15-year-old Nate Stacy, of Owasso, OK. Stacy finished second in the TCB Driver's Championship in 2014 and he makes his GTS debut this coming weekend in the No. 51 Folds of Honor Rehagen Racing Ford Mustang Boss 302. Martin's Rehagen Racing will also campaign a Mustang for Dan Martinson of Medina, MN in the No. 33 Gear Tie/Nite Ize Ford Boss 302.

TRG-AMR brings two Aston Martin Vantage GT4's to the GTS battle with Kris Wilson and Derek DeBoer behind the wheels. Wilson, of Monument, Colo., will pilot the 07 Orion/Royal Purple/LaSalle Solutions/PassTime USA car and comes into the weekend second in class championship points. Wilson, a sportscar veteran won Round 1 to go along with three top 10 finishes. He comes into the weekend with 376 points. DeBoer, of Ashland, Ore., will pilot the No. 09 BlackRiderRacing/Lex Tempus/BRM Chronographs car.

Michael Cooper, of Syosset, N.Y., in the No. 10 Blackdog Speedshop Chevrolet Camaro Z28, comes into the Barber Motorsports weekend sitting in third place in the GTS Drivers' Championship with 364 points. Cooper looks to improve upon his 7th and 5th at St. Petersburg to close the gap on Martin. Cooper's teammate for Barber is four-time series and back-to-back GTS Drivers' Champion Lawson Aschenbach, of Palm Beach Gardens, Fla. who will pilot the No. 1 Blackdog Speedshop Chevrolet Camaro Z28.

More than a half dozen Mustangs are entered at Barber in GTS. Round 4 winner Spencer Pumpelly, of Atlanta, GA returns to pilot the No. 87 DWW Motorsports iTrackzone.com Ford Mustang Boss 302. Pumpelly has competed at the top levels of sportscar racing for over a decade, garnering multiple victories in various series, including two GT class wins at the Rolex 24 Hours at Daytona. Kurt Rezzetano, of Phoenixville, Pa., in the No. 37 Phoenix American Motorsports/Calvert Dynamics Ford Mustang Boss 302, comes into the weekend fourth in drivers' points with 358. Rezzetano had a second and a third at St. Petersburg, and looks to get on the top step at Barber.

Mark Wilkins, of Toronto, ON, comes into the race weekend 7th in points with 284. The winner of the Round 3 GTS race last year will pilot the No. 38 Kinetic Motorsports PutOnTheBrakes.Org Kia Optima. Partnered with him will be teammate Ben Clucas, of Northampton London. Clucas pilots the No. 36 Kinetic Motorsports DonorsChoose.Org Kia Optima. Clucas comes into the weekend 6th in drivers' standings with 343 points.

Jack Baldwin, of Marietta, Ga., won last year's Round 4 GTS race at Barber. Baldwin has had a tough start to the 2015 season, sitting 11th in the class drivers' standings and he looks to get back on track with a strong showing at Barber. Buz McCall, of Boca Raton, Fla. will again team with Baldwin as the pilot of the No. 72 RESET-MD GTSport Racing Porsche Cayman.

Rounding out the 24-car GTS field are John Allen, of Denver, Colo. in the No. 16 SGV Motorsports/Bilt Racing Service Itech SGV Isringhausen CSF Porsche Cayman, and Clint Guthrie, of Birmingham, Ala. in the No. 4 Racing for Children's Medical Properties Trust Porsche 911.

Pirelli World Challenge: Time for Michael Lewis to move up