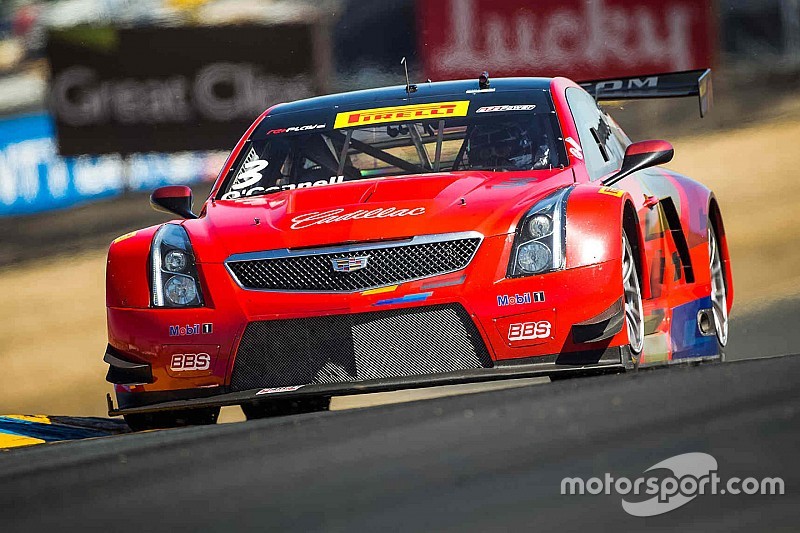 Cadillac Racing’s Johnny O’Connell has admitted he’s in a “must-win situation” as he attempts to win his fifth straight Pirelli World Challenge championship this weekend at Mazda Raceway Laguna Seca.

“I’m in a ‘must-win’ situation this weekend,” said O’Connell. “It will be hard to match the drama of last year, but we aren’t mathematically out of the title chase yet. We’ll need some luck to win the title but, hey, I’m Irish. Who knows?”

The 54-year-old’s reference to last season’s finale was a recollection of his fierce title battle with his former Corvette Racing teammate Olivier Beretta, who was in a Ferrari last year.

He recalled: “I got a great start last year and I knew Olivier would be coming up to challenge after he had a disappointing qualifying run. He made a wild move entering the Corkscrew and his car hit mine from behind. I wasn’t sure if my Cadillac was damaged but I had to keep going to finish the race.

“He felt he had to win the race to win the championship. He made another wild move later in the race and he didn’t finish. But I did finish and we won our fourth straight crown. It was a crazy race.”

O’Connell is tied with Cadillac Racing teammate Michael Cooper on 1451 points, but despite his points deficit to the leaders, he said he’s staying positive.

“We had a very strong car at Sonoma and Laguna Seca has always suited me very well,” he said. “I have won there and have been on the podium a lot there over my racing career. We’ll need that performance again and some tough luck for the point leaders. But it’s racing and anything is possible.”

Parente’s five wins and six pole positions in 2016 have been exceptionally strong considering the Portuguese driver had not seen any of the PWC tracks previously. The one exception, ironically, is Laguna Seca on which he raced in the now defunct A1GP series nine years ago.

Long, the 2011 PWC GT champion, returned to the GT series for a full season for the first time since his title run and has so far scored three wins despite a mid-season team switch. After winning at the Circuit of The Americas in March for EFFORT Racing, the Porsche factory driver saw his team close down operations in May. But the switch to Wright Motorsports later in the month allowed him to continue his championship fight.

Michael Cooper, of course, has the same chances as O’Connell, being on the same points tally. His pace relative to the veteran in the other Cadillac ATS-V.R has been impressive throughout the year, and has certainly provided further proof as to why he earned the GTS-class championship last season in the Blackdog Speedshop Chevy Camaro.

While the championship battle is confined to four drivers, the race is far more open. The Always Evolving Nissan GT-R duo of Bryan Heitkotter and JD Davison, are well capable of winning, as Heitkotter proved with his twin triumphs at Utah. And the RealTime Racing pair of Ryan Eversley and Spencer Pumpelly will be flinging the Acura TLX-GTs around for one last time before the new NSX makes its PWC race debut.

But of all the drivers outside the championship, the ones most likely to contend for victory are Austin Cindric and Michael Lewis. Cindric seems to have attracted all the bad luck that his K-PAX McLaren teammate Alvaro Parente has avoided. But now that Cindric is a regular match for Parente, it would be fine to see that pace rewarded with victory.

Michael Lewis, meanwhile, was the other EFFORT driver to suffer as the team shut down (we hope) temporarily. It was particularly cruel that it came just a couple of months after Lewis had proved his mettle with victories in both rounds at St. Petersburg. Nonetheless, a partnership with the Calvert Dynamics team has seen his Porsche 911 gradually coming to greater prominence; a victory this weekend would not be a huge surprise.