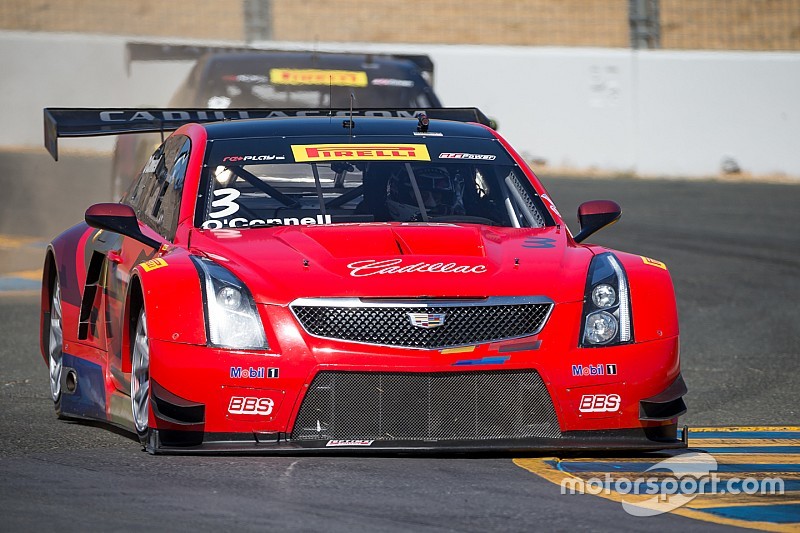 Cadillac’s Johnny O’Connell earned his second Pirelli World Challenge GT win of the Sonoma race weekend and his third of the season after bursting past the front-row McLarens at the start.

The KPAX McLaren 650Ss Austin Cindric and Alvaro Parente started first and second on the grid but they were outfumbled by the wily Cadillac veteran from the green flag and appeared to have no answer to the brute power of the ATS-V.R on that opening lap.

In fact, both were jumped also by the Gainsco/Stallings McLaren of Jon Fogarty, although this was to prove his undoing. Cooper's Cadillac ran into the back of Parente at the Carousel, which pushed him into Fogarty, spinning the #99 'Red Dragon' around. Remarkably, despite going broadside, Fogarty wasn't hit again, but his day was ruined, as was Cooper's, while Parente carried on but carrying bodywork damage.

O’Connell got his lead out to as much as 11sec by Lap 30, although Parente and Cindric were still able to ease clear of the chasing pack in second and third.

Those left chasing the podium were initially led by Bryan Heitkotter in the Nissan GT-R, but the charging Porsche 911 of Patrick Long, which started only 14th,  became a major factor on Lap 17 as he passed former teammate Michael Lewis for fifth place. Certainly Heitkotter had nothing for the top three, and instead had to use lapped cars to try and give himself some breathing space ahead of Long.

His defense failed on Lap 22, as Long dived down the inside of the Nissan at the final hairpin, and claimed fourth as they raced into Turn 1.

Some 6.5sec down at this stage was Heitkotter’s teammate JD Davison, who was being pursued hard by the AMG Mercedes SLS piloted by Jonathan Summerton, and the third McLaren of Colin Thompson, the Acura TLX of Peter Kox and the Audi R8 of Kyle Marcelli.

Focus switched to the front over the final eight minutes of the 50-minute race, as Cindric slashed the gap to teammate Parente from 2.5sec to 0.7. Parente had appeared to be carrying loose bodywork for the majority of the race, and now was smoking his tires under braking. However, Cindric knowing his team is in the championship battle, stayed in line and crossed the line in third the pair of them almost a dozen seconds behind the victorious Cadillac.

Pat Long was a further 4.6sec, behind, while Heitkotter held on to fifth just 0.1sec ahead of Lewis, while Davison took seventh half a second clear of Summerton. Thompson, Kox, Marcelli and the second Acura of Ryan Eversley filled out the top dozen.

Michael Schein’s Porsche ran away with the second GTA winning trophy of the weekend, as Martin Fuentes pitted with a sick Ferrari 458 after just two laps. Meanwhile in GT Cup, Alec Udell beat Sloan Urry and Mike Hedlund by six and 13 seconds, respectively.