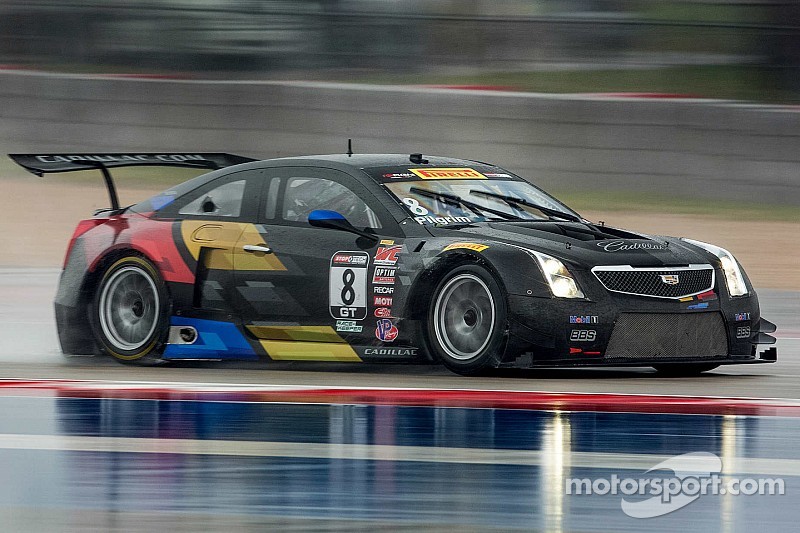 Starting from the front row in second position in his No. 3 Cadillac ATS-V.R based upon his fast lap time from yesterday's race O'Connell (Flowery Branch, Ga.) and the other 47 cars in the GT field started the race from a rolling start.

You're not happy with a seventh place finish, but I am proud of the way I drove this new car...

The rolling start was implemented as the COTA circuit was getting drenched in rain. When the field came by to complete lap one O'Connell was in fourth. Teammate Pilgrim (Boca Raton, Fla.) was forced into a spin in his No. 8 Cadillac ATS-V.R in Turn Two relegating him to the back of the field. He was able to work his way up to 19th position by the end. O'Connell drove the all-new Cadillac ATS-V.R in its first wet race to a well-earned seventh position.

"Lot of rain," said O'Connell. "We had a science project going on today at COTA. This was the first time we ran the new ATS-V.R in a full rain set-up. We learned a ton about the race car, the engine and the electronics. The cars we are racing against are well seasoned as are the drivers. You're not happy with a seventh place finish, but I am proud of the way I drove this new car and we gathered some valuable data so when we run in the rain again we will be that much better. A podium and a top ten finish is a pretty good weekend with a brand new car."

Pilgrim had a tough weekend and is ready to move on to St. Pete in three weeks.

"What can I say another tough race," Pilgrim said. "I was heading into Turn Two on the first lap and got tapped and it sent me around. I recovered and then the wipers went out just after that a few laps later. I had a lot trouble with visibility so I was doing the best I could to pass some people and keep the car on the track. The rain began to slow toward the end and I was able to pick up a few more positions. It was a tough weekend. The positives is that the car was reliable, ran every lap in practice and the race. We learned about what we have to do to get the ATS-V.R better in the wet for the next rain race."

The Pirelli World Challenge Series season opening Nissan Grand Prix of Texas at the Circuit of the America's races will be televised on the CBS Sports Network Sat., Mar. 14 at 11 am.