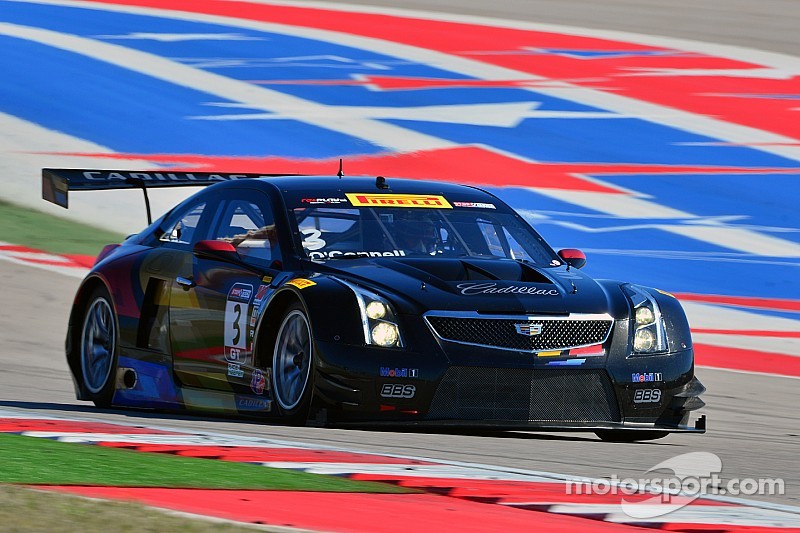 O'Connell (Flowery Branch, Ga.) started from the fifth row on the 48-car World Challenge GT grid. When the lights went out for the standing start his No. 3 Cadillac ATS-V.R hooked up and by the time he was exiting the first turn he was in fourth position. On lap seven the three time World Challenge GT champion inherited third when the leading Lamborghini had to perform a drive-thru penalty for going over the blend line into Turn One. The race went caution free as O'Connell was able to hold off the charging McLaren of Kevin Estre for the final step of the season opening podium.

"I had a Nissan in front of me. He startled me with the start he got," O'Connell said. "The McLaren had issues and I was able to get by him clean. As I went through the gears, the initial launch and momentum, had me in a good position going into Turn One. If I was greedy, I might have been able to come out of Turn One in second. I settled into fourth and then the Lambo had to come in and I was in third. We had great reliability in the first race. Running with no real issues was great. If you would have told me we were going to be on the podium in the first race with a new car I wouldn't have believed you. We took what was given and had a nice clean run. Everyone at Cadillac Racing did a great job."

O'Connell likes the top drivers in the series

"I had a great seat for the battle in front of me," he continued. "Estre in the McLaren took a couple of pokes at me. There was really no hanging with the Porsche and Ferrari in the front, but I was hoping, just a little, that they would get together and give me a gift. The series has some top drivers this year and that just motivates this team even more. I couldn't be prouder of everyone at Cadillac Racing for the effort they've put into this new car."

Teammate Andy Pilgrim (Boca Raton, Fla.) also had a good start in his No. 8 Cadillac ATS-V.R. In the middle of Turn 12 a glitch in the electronics put Pilgrim into a spin.

"I had a good start and was able to get a run on the car in front of me," said Pilgrim. "I had to check up a little when a car in front of me slowed. As I charged up the hill I had to be careful not go over the blend line. I got touched a little into Turn One, but was able to make up a couple of positions. Going through Turn 12 I think I had an electrical problem and the tires spun and I was sideways in the turn. We are still learning about this new ATS-V.R. From that point I was in recovery mode. I was able to run the whole race in a lot of traffic. It was encouraging to be able to put the car through a race distance heat cycle. Great result of the team and Johnny to get a podium first time out."