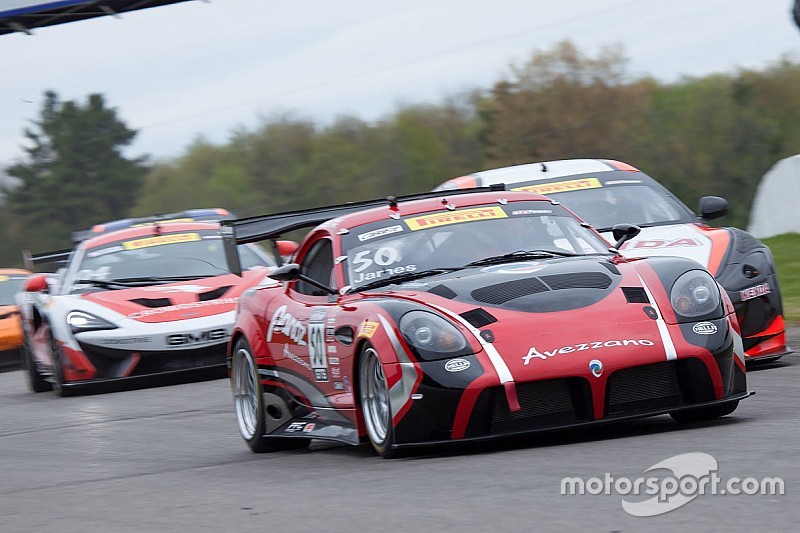 Lakeville, Conn. – The annual Memorial Weekend racing spectacular at the historic Lime Rock features some 111 entries in the Pirelli World Challenge on Friday and Saturday (May 26-27) with many new driver lineups in the SprintX doubleheader races.

Following a rain out last Sunday for Round 4 in SprintX at Canadian Tire Motorsport Park, the 34 SprintX entries (two-drivers) bring an outstanding field to the popular 1.5-mile road circuit carved into the Connecticut landscape.

In addition, the Touring Car classes have grown so much in 2017 that this weekend’s TC competition has been split into two separate TC events each day. The 36-car TC category will race in its own contest with 21 TCA and TCB entries will compete in their own event. TC division features auto makes like Audi, BMW, Honda, Hyundai, Lotus, Mazda, Nissan and Porsche.

Three different Pro/Pro class pairs of drivers have scored SprintX victories thus far in the 2017 Pirelli World Challenge in the first three Rounds at VIR and CTMP. The No. 31 TR3 Racing/The Collection Ferrari 488 GT3 of Italy’s Daniel Mancinelli and Andrea Montermini of Italy captured Round 1 with Daniel Morad and veteran sports car star Ryan Dalziel taking Round 2 in the No. 2 CRP Racing/DeVilbiss Mercedes-AMG GT3.

At Lime Rock this weekend, former Formula European GT3 champion Niccolo Schiro replaces Montermini with Mancinelli in the No. 31 Ferrari, while veteran Marc Lieb replaces Bergmeister with Long in the No. 58 machine.

Defending PWC Sprint GT champion Alvaro Parente of Portugal, a GT Sprint double winner at Lime Rock park in 2016, returns to the fast 1.5-mile circuit after a second-place SprintX finish in Round 2 with youngster Ben Barnicoat of England in the No. 9 K-PAX Racing McLaren 650S. K-PAX Racing also has entered another solid pairing with veterans Bryan Sellers of Braselton, Ga., and Jonny Kane of Northern Ireland in the No. 6 K-PAX Racing McLaren 650S in the Pro-Pro class.

The all-new Acura NSX program with RealTime Racing is developing the new GT3 machine in the opening rounds of 2017. The two regular RealTime Racing drivers, Ryan Eversley of Atlanta and Peter Kox of The Netherlands, will have Tom Dyer of Corte Madera, Calif., in Eversley’s No. 43 Acura NSX GT3 at VIR, while Toronto’s Mark Wilkins will team up in Kox’s No. 93 Acura NSX GT3.

The Audi stable will have veteran Dane Cameron moving into the Pierre Kaffer seat at Lime Rock Park this weekend for Magnus Racing in the Pro/Pro division with and Spencer Pumpelly in the No. 4 Audi RS8 LMS sports car, and Bentley has a a strong Pro/Pro duo in PWC regular Adderly Fong of Hong Kong and sports car star Vincent Abril of Monaco in the No. 88 Absolute Racing Bentley Continental GT3.

In the large Pro/Am category, two-time 2017 GTA winner James Sofronas in the No. 14 GMG Motorsports Porsche 911 GT3 R with team up with Matthew Halliday after Sofronas and Laruens Vanthoor scored the Round 3 event at CTMP. Vanthoor is competing in Nurburgring this weekend.

Another strong Pro-Am effort this weekend will be VIR Round 2 winners Jeroen Bleekemolen of Monaco and Tim Pappas of Boston, Mass., with their potent No. 54 Black Swan Racing Mercedes AMG GT3 as well as the Round 1 winning pair of Jan Heylen of Tampa, Fla., and Michael Schein of Glen Cove, N.Y. in the No. 16 Wright Motorsports Porsche 911 GT3 R.

2016 GT Cup champion Alec Udell of The Woodlands, Tex., and two-time SprintX winner Preston Calvert of Potomac, Md., will contend at Lime Rock in the No. 77 Calvert Dynamics/GMG Motorsports Porsche 911 GT3 R, along with another two-time SprintX winner Michael Lewis of Laguna Beach, Calif., and his partner, Mike Hedlund of Redwood City, Calif., in the No. 98 K-PAX Racing McLaren 650S.

Former GTA series champion Frankie Montecalvo of Highlands, N.J., the Pro-Am pole winner at VIR and CTMP, will team with Mexico’s Ricardo Sanchez in the No. 75 Always Evolving/AIM Autosport Nissan GT-R Nismo GT3 in the Pro/Am class along with Davis (second overall at VIR with Mike Skeen) and John Potter in the No. 44 Magnus Racing Audi RS 8 LMS.

Other Pro/Am challengers will include Alexandre Negrao/ Alexandre Negrao Sr. in the No. 92 MCC Motorsports Mercedes AMG GT3; David Ostella/James Dayson in the No. 23 M1GT Racing Audi R8 LMS Ultra and Andre Cuoto/Yufeng Luo in the No. 78 Absolute Racing Bentley Continental GT3.

Expected to challenge for the Am-Am division honors are with Henrique Cisneros of Miami, Fla., and Tyler McQuarrie of Danville, Calif., in the No. 30 MOMO/NGT Racing Ferrari 458 GT3;. The No. 007 Lasalle Solutions/Adobe Road Winery/TMG-AMR Aston Martin GT3 entry of Kris Wilson of Littleton, Colo., and Drew Regitz of Denver, Colo., also to contend the GT Am/Am category at CTMP.

The wild GTS competition has been heightened with the additional the new GT4 vehicles this year and the Lime Rock Park field should supply plenty of action in Rounds 7 and 8 for GTS presented by Case-It.

Leading the challenge for Chevrolet is four-time series and two-time GTS champion Lawson Aschenbach piloting the No. 10 Blackdog Speed Shop Chevrolet Camaro GT4R. Aschenbach just missed out in winning the 2016 GTS title despite scoring four race wins. Now, he looks for his first 2017 GTS victory after an consecutive podiums in the new Camaro GT4R at St. Petersburg, VIR and CTMP.

The Flying Lizard Motorsports duo of Spain’s Rodrigo Baptista and 17-year-old Nate Stacy of Owasso, Okla., will figure in the GTS mix at Lime Rock Park with their No. 3 and No. 14 Flying Lizard Porsche Cayman Clubsport MR sports cars, respectively.

Another exciting new machine to the GTS ranks in 2017 is the popular No. 50 Team Panoz Racing Panoz Avezzano GT with veteran sports car racer Ian James of Paradise Valley, Ariz., at the controls. The new Panoz has shown potential in its initial outings in the first six rounds.

Veteran PWC racer Jeff Courtney of Milwaukee, Wis., was impressive at VIR with a pole and two second place finishes and his always-popular No. 99 Kenda/RecStuff.com Maserati GT4 is expected to race for the win this weekend.

In the GTS Am class, VIR winner Jason Bell of Tampa will be in the hunt with his No. 2 Racers Edge Motorsports SIN CAR R1 GT4 as well as Aschenbach’s Black Dog Speed shop teammate, Tony Gaples in the No. 11 Blackdog Speed shop Chevrolet Camaro GT4R.

The Case-It Racing teammates Adam Merzon of Greenwich, Conn., and Cameron Cassels of Coldstream, BC, Canada, also will be battling in their No. 017 and No. 018 Case-It Porsche Cayman Clubsport MR machines, as well as veteran racer Mark Klenin of Lone Tree, Colo., in the No. 62 KRP/Tender Belly McLaren 570S GT4. Another McLaren 570S GT4 in the GTS field will be CTMP winner George Kurtz of Paradise Valley, Ariz., in the No. 04 Crowdstrike/GMG sports car as well as Alan Brynjolfsson of Tampa, Fla.,, in the No. 02 VOLT Racing McLaren 570S GT4.

Veteran Chris Beaufait of Freeland, Wash., in the Racers Edge No. 45 SIN R1 GT4 will be among other GTS contenders and Fred Roberts of Toronto is also entered in the No. 89 JCR Motorsports Maserati GT4 as well as Bill Zeigler of Ponte Vedra, Fla., in the No. 9 ANSA Motorsports KTM XBow and Craig Lyons of Newport Beach, Calif., in the No. 03 TRG-AMR Aston Martin Vantage GT4.

The GTS presented by Case-It events will be 50-minute sprint contests on Friday and Saturday in Lime Rock Park.

The first four Rounds of the highly-competitive Touring Car classes have produced some crazy on-track action and the 36 entries will make the Lime Rock Park events even more sensational.

An impressive group of BWM M235iR cars are prepared to do battle at the famed Lime Rock Park circuit led by defending TC class champion, Toby Grahovec of Celina, Tex., in the No. 1 Classic BMW Motorsports BMW M235iR. The former SCCA national champion was the model of consistency last year with two victories including a sensational CTMP race for a win.

VIR TC Round 2 winner Greg Liefooghe, in the No. 20 ART Racing/Steve Cameron Racing BMW M235iR will be a driver to watch at CTMP after impressive showings at VIR.

TC Rounds 1 and 3 victor Paul Holton of Orlando, who has been competing in Touring Cars in Europe, returned to VIR with the TC debut of the No. 71 C360R Audi RS3 LMS Club Sport. Holton is a three-time PWC race winner and expects to be in the fight for the TC title in 2017.

Former Pirelli World Challenge champion Randy Pobst of Atlanta returns to PWC action at Lime Rock Park this weekend at the wheel of the No. 36 ZIMA Motorsports BMW M235iR. Pobst currently ranks second in all-time PWC wins (with 30) and poles (with 40).

Other top contenders this weekend in TC will be the strong pair of Will Turner of Amesbury, Mass., and Dane Cameron of Charlotte, N.C., in the No. 95 and No. 86 Turner Motorsports BMW M235iR. Both have been winners in a variety of sports car racing throughout North America.

Florida-based Shea Racing brings popular team owner/driver Shea Holbrook of Orlando in her Honda Accord. Holbrook, a six-time PWC race winner, has been busy in the off-season with a four-car operation (two in TC, two TCA) but figures to be a series title challenger in the popular No. 67 Bubba Burgers/Lucas Oil Honda Accord.

TC ‘Rookie of the Year” Anthony Geraci, of Glen Cove, N.Y., won a pole position at VIR in the new No. 69 S.A.C. Racing Audi RS3 LMS Club Sport sedan and he be a challenger at Lime Rock Park.

The VIR and CTMP TCA racing was spectacular with some of the best wheel-to-wheel action during the weekend and last year's TCA Rookie of the Year Matthew Fassnacht of Madison, N.J., in the No. 74 S.A.C. Racing Mazda MX-5 Cup won twice at VIR. Fassnacht fought off his Mazda running mates to score his first two PWC feature wins of his racing career.

Defending TCA series champion Elivan Goulart of Shelton, Conn., , in the No. 70 S.A.C. Racing/SCDA1.com Mazda MX–5, was dominant in 2016 with five of 12 TCA races and 12 top-five placings. Goulart’s performance also helped Mazda clinch the class Manufacturer’s Championship. Lime Rock Park is Goulart’s home track and should be a favorite in Friday and Saturday’s races.

Touring Car B–Spec or TCB is the most cost-effective class but the racing supplies some popular door–to–door racing and drafting bumper-to-bumper in all of the Pirelli World Challenge series.

With O’Gorman, the 2016 champion, moving to TCA in 2017, the series battle for the point title will be wide-open at Lime Rock Park for Rounds 3 and 4.

Qualifying: (All times listed are EDT)

Long and Lieb lead from pole to checkers at Lime Rock