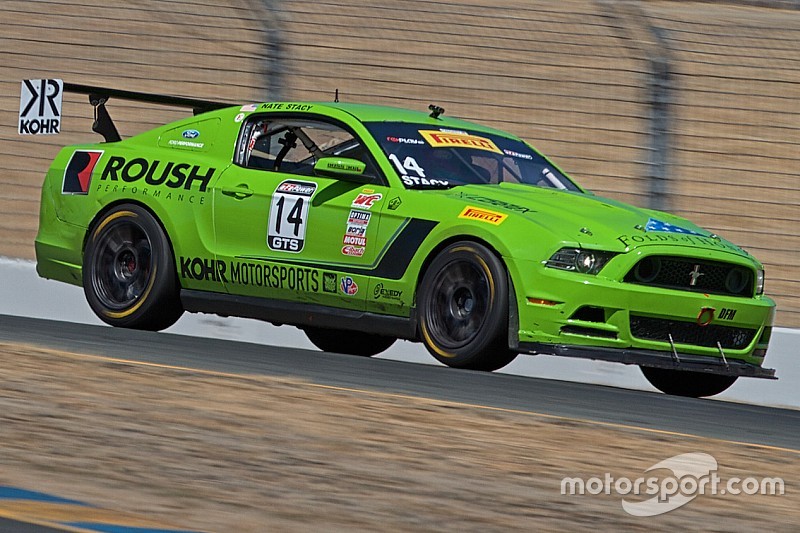 The 16-year-old Roush Performance driver in Pirelli World Challenge’s GTS class has been a revelation this season. He spoke to David Malsher about his improvements, his technique, and his aims for the future.

Just as I dislike the work of Miles Davis but acknowledge his brilliance as a trumpeter, I disagree with the whole principle of Balance of Performance yet believe that Pirelli World Challenge’s competition director Marcus Haselgrove is some sort of genius.

He could scarcely have done a better job this year. The GT class cars produce broadly equal lap times, despite us all knowing there is no way in hell that a Cadillac ATS-V.R should be able to lap a track like Laguna Seca at the same pace as a McLaren 650S.

And the GTS class is something else again. There is a natural difference in the way a little GT4-spec car like a KTM X-Bow or SIN R1 is going to produce its pace compared with a Ford Mustang or Chevrolet Camaro, yet these very different types of machine seem to be locked in constant combat. The result is that the GTS races produce some of the most compelling racing on this continent.

What Haselgrove cannot do, however, is defy the laws of physics. While a Mustang’s power can make up for its handling deficit and higher center of gravity during a couple of flying laps in qualifying, it’s inevitable that over the course of a race, it will take more life out of its Pirellis than a car that’s the height of a frisbee and the combined weight of a Mustang’s doors and hood.

Which is why Nate Stacy’s performance at Sonoma Raceway last month was one of the most impressive drives I’ve seen from anyone in any series this year. After bursting into the lead at the start of the Saturday race, you'd logically expect his driving to become ever more fraught as he tried to hold off KTMs, SINs and Ginettas that in the second half of the race filled his mirrors and nipped at the tail-bumper of the Roush Performance pony car. Instead this 16-year-old retained his composure, and enough tire life to give himself decent traction and just enough lateral grip. He took a brilliant victory, while his rivals ran into each other or outbraked themselves trying to find a gap in his defense.

Here’s another thing – there was no questioning Stacy’s track ethics. I’ve watched drivers with 20 or 30 years of racing experience who still pull off petulant blocking maneuvers or run their rivals out of track, and then play the disingenuous “Who? Me?” card, or who pretend they don’t understand what is and isn’t allowed according to the rulebook. Yet here was a kid in his mid-teens who, toward the end of the race, didn’t make a single swerve nor pull off any intimidatory tactics. He just promptly and unequivocally took up the defensive line way before corner entry, to force his pursuers to go the long way around. And none of them managed it.

Third in the next day’s race, followed by a second and a third at Laguna Seca last weekend (the former from the back of the grid!) brought Oklahoma-born Stacy’s season tally to eight podium finishes, plus that victory, and resulted in second in the championship.

A quick scan through his résumé reveals that Nate was winning NASA (National Auto Sport Association) races from the age of 12, scoring yet more victories in the hotly contested Spec Miata classes in 2013, before racing to second in the Pirelli World Challenge’s Touring Car Spec B class in 2014 driving a Ford Fiesta. A brief dalliance with a Volvo C30 in PWC's top Touring Car class at the start of 2015 led to his being recruited by Roush and Rehagen Racing on a part-time basis, before being signed up full-time by Roush, alongside Jack Roush Jr.

I don’t know if it was so much about expectation, as asking myself how much work it would take me to get to that point. I had access to several really good drivers – Dean Martin, Alec Udell, Jack Roush Jr. – for information and advice. So because of the team I’ve surrounded myself with, it wasn’t a case of ‘if’ I would adapt but ‘how long.’ Because, sure, it was a big change.

When did you really feel you were getting the best from this type of car? Was there a specific turning point where it all clicked, or was it a gradual process?

Sonoma last year – it was like a light switch turned on. Me and Dean had gone to a track right by me called Hallett [in Jennings, Oklahoma] and tested for two days straight, trying to get me more comfortable with the car. And then we rolled out for the first session at the next race at Sonoma and all of a sudden he and I were running identical times. After that, I had a better perspective, I could see and feel what the car could do and I was pushing it further than I had in the past. I love the feeling that I’m getting everything out of the car.

But there are faster ways than sliding it around. So then at Mid-Ohio this year, I made another step, really tidied up my act, and was getting the car to be fast and on the edge, without drifting it every other corner… That slip coefficient has been the big challenge to get my head around. With the front-wheel-drive Volvo, for example, there was never that problem. It was just throw it into the corner early, the back end would come around and you just floored it to neutralize that and slid out of the corner. With the Mustang, you’ve got to aim it well, get the car rotated well, and then pick up the throttle where you’re right on the edge of that coefficient where it’s about to break over into a slide.

So speaking to Dean about the limit of what the tire was able to do, and learning to feel where that edge of adhesion is, I can take that to more tracks. And it's not only quicker, but obviously it keeps the tires under you for longer.

Now that you’ve mastered that, is the GTS class where you want to stay, or are you looking to move up to GT?

If I had my choice, I’d love to be able to step up the ladder again, but I think staying here and honing my craft a little bit more – like working on racecraft, and working through traffic better – is something I want to do before I move up. If someone suddenly called up and said, ‘Let’s go run a GT car,’ and was offering it free, then maybe I’d make the move. But I don’t think that’s going to happen this time. Maybe in a year or two. I’ll keep waiting for that phone call.

Something that always intrigues fans of old-school musclecars who watch this series is how the Mustang compares with the Camaro. Have you noticed the relative strengths and weaknesses while racing with Lawson Aschenbach? Or are the differences more down to your relative driving styles?

Everyone has their own unique signature in this series. Lawson’s thing is aggressive, aggressive, aggressive and then cools down and hopes he has enough tires for the end of the race. And then we’ve gotten really good at being aggressive and then having tires at the end of the race. A big part of that is because my Roush team is really good at setting the car up. So you’re not always comparing apples with apples if you’re trying to compare the cars. Plus Lawson’s a really good driver with a lot of experience – he’s won the GT, the Touring Car and two GTS championships.

Well that was my next question: regarding the blend of cars in GTS – do you really find that interesting, or just irritating? Would you prefer it to be more like Trans-Am in the early ’70s where everyone in the top class was in a musclecar?

Well, yeah, it would be cool if it was like Trans-Am and everyone was running a pony car, sure! But I’m not sure if that would make for the best racing, necessarily, because you had to drive those cars ridiculously on the edge, and I don't think there are many people in the series who have had the experience of doing that.

I think Pirelli World Challenge stepping more toward GT4-spec sportscars is going to help them in the long run, especially when more manufacturers come in because GT4 are more real-world cars. So the pony cars going away… that’s not necessarily a bad thing for the series, because I’m sure we’ll get newer versions that are GT4 spec.

But at the same time, I think these legacy pony cars are super-fun to drive, and I like how when the BOSS 302 model came out, suddenly you’d see a difference of half a second between drivers, separating the men from the boys, because some were willing to push that little bit further.

What’s your ultimate ambition? Do you feel World Challenge is a destination series or are you using it as a stepping stone to something else?

I’m really cool with any kind of racing there is. I’m sure Rallycross would be really cool to drive; I don’t know if I like ovals because I’ve never driven one, so it would be great to test a NASCAR-type stockcar.

But my ultimate goal since I started racing has been to go to Australia and race V8 Supercars – or Supercars as they’re called now. I’ve always been a big fan of those cars, and racing alongside Jamie Whincup and Mark Winterbottom… that would be so cool. I’d want to do that for at least a season with a good car and a good team.

On the other hand, it would also be nice to try all kinds of racing – Rallycross, rally, oval, all types of sportscar and road racing. But I don’t want to get ahead of myself. I think I’ve got time, and there’s a lot I want to accomplish in this series. For now, I’m focused on that.

Nate Stacy said a lot more else – including the fact that three of his inspirations are Johnny O’Connell, Niki Lauda and Carroll Shelby. But you’ve probably read enough now to get the picture. This is a serious young racer who’s humble enough to improve himself, and eloquent enough to be a sponsor’s dream. And as his results prove, despite not yet turning 17, he’s already operating at a very elevated level. Keep an eye on him.