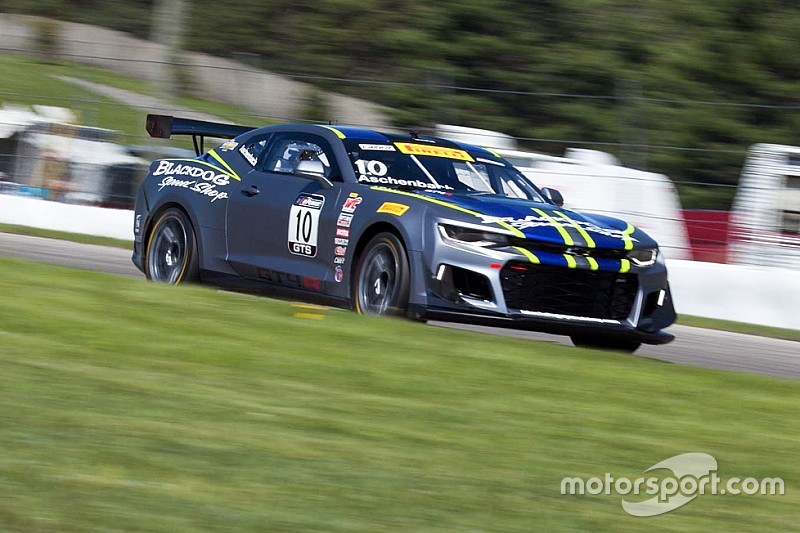 Lawson Aschenbach won the opening race of the Pirelli World Challenge weekend at Mid-Ohio, but it was marred by a huge crash at the start that befell Fred Roberts.

Aschenbach claimed the first win for the Blackdog Speedshop-run Chevrolet Camaro GT4 in the series.

From pole position on his 18th birthday, Harry Gottsacker stacked up the rolling start in his Ginetta G55 but then got swamped at the green.

The fast-starting Porsche of Rodrigo Baptista got a huge run as a result, but he clipped Am-class pole sitter Fred Roberts, breaking the Maserati GT4’s right-front steering arm which fired him across the track. He slammed into the concrete wall on the left-hand side of the circuit at unabated speed.

Rescue workers toiled for over 10 minutes to free Roberts, and cut the roof from his car. Fortunately, he was able to walk to the ambulance unassisted once released.

Roberts was taken to hospital for observation after being checked over at the medical center. Baptista was black flagged for his part in the incident.

After a long caution period, Aschenbach streaked away from Martin Barkey (KTM), Gottsacker and Jeff Courtney’s Maserati at the restart. Gottsacker worked his way up to second at Barkey’s expense, which allowed Aschenbach a 5s lead in just one lap.

Ian James surged up to third in his Panoz, as Barkey struggled for pace. George Kurtz’s McLaren also demoted him to run fourth.

A wildly-optimistic move by Tony Gaples’s Chevy Camaro resulted in a three-car collision that caused a second full-course yellow, which ruined the huge advantage that his teammate Aschenbach had built up. Courtney, who was taken out in the clash, labelled the driving standards as “bullshit”.

In a 10-minute sprint to the finish, Aschenbach pulled clear again of a battling Gottsacker and James.

James passed Gottsacker thanks to superior straightline speed for second, but could do nothing about Aschenbach.

Kurtz was the top Am-class driver in fourth, just holding off Parker Chase for the position.