Long and Lieb lead from pole to checkers at Lime Rock 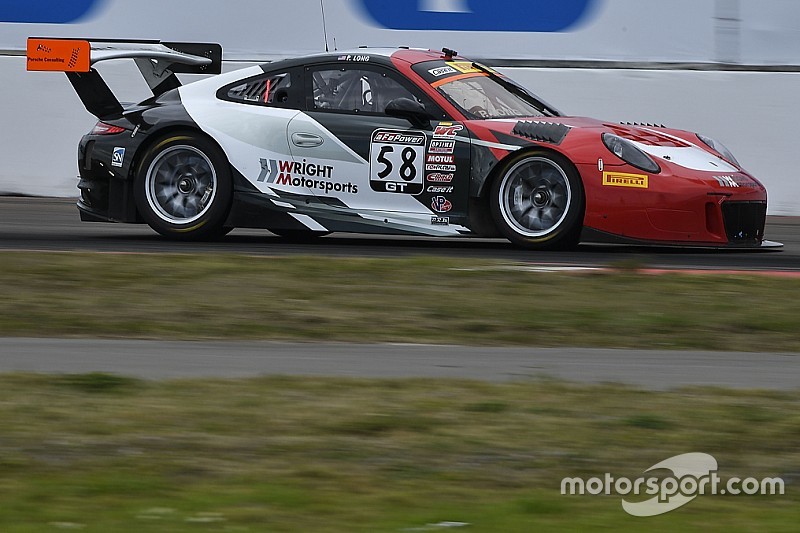 Friday's SprintX race at the Pirelli World Challenge Grand Prix of Lime Rock Park was won by Pat Long and Marc Lieb in the Wright Motorsports Porsche 911 GT3 R, which won by the margin of 5.4seconds after an hour of racing.

Long took the opening stint but wasn't able to escape from Spencer Pumpelly and his Magnus Racing Audi, which got around Daniel Morad in the CRP Racing Mercedes AMG GT3.

Long then handed over to co-driver Lieb toward the end of the pit window delta with roughly 25 minutes left while other contenders followed a similar strategy.

Lieb exited the pits with Magnus Racing’s Dane Cameron right on his tail, but was able to pull a gap before a late caution to retrieve the #3 Cadillac ATS-V.R of Ricky Taylor that was off in Turn 1 following contact from another car.

Lieb controlled the restart with 11 minutes to go, extending his overall lead and taking the win for Wright Motorsports. Wright made it a double victory with a win in the GT Pro/Am division for the pairing of Michael Schein and Jan Heylen, who took the win after a tight and competitive race with Autosport Nissan GT-R Nismo GT3 of Ricardo Sanchez and Frank Montecalvo.

"This is some redemption after last week at CTMP with the second-place finish," said Long, the 2011 PWC GT champion. "The race was everything you expect from Lime Rock. We played the patient game today as we looked for the proper holes. The race was pretty straightforward from the start. Spencer Pumpelly kept me honest through the traffic. It's always good racing with Spencer. He is a class act. It's been great working with Marc and trying to convince him to come out of retirement. Now we look to repeat on Sunday."

"It's difficult to come to a new series and you don't do many races with the team," said Lieb, who filled in for team regular Jorg Bergmeister, who is racing in the Nurburgring 24 Hours. "It was good to do the test day on Tuesday here at Lime Rock and that helped me be ready for today's race. It was great to work with the team, driver changes and the pace.

“Everything worked perfectly. I'm really happy to help out Patrick in the championship fight."

Top honors in the GT Am/Am division when to MOMO/NGT Motorsports and the Ferrari 458 GT3 piloted by Henrique Cisneros and Tyler McQuarrie.

In GTS, the Case-it Racing drivers of Adam Merzon and Trent Hindman won in Pro/Am competition in the Porsche Cayman GT4 Clubsport MR. In Am/Am for GTS, it was Chris Hall and Alan Brynjolfsson taking the victory for VOLT Racing in their Ford Mustang.