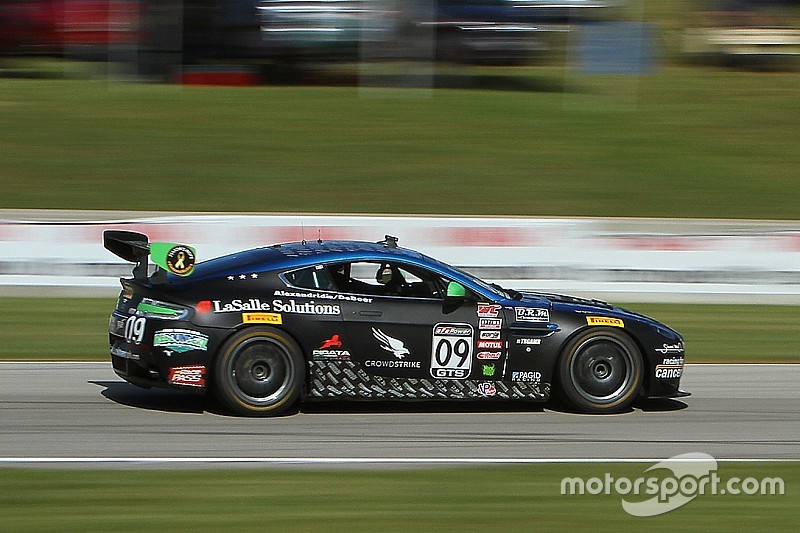 Derek DeBoer’s Aston Martin claimed victory in the GTS class of the Pirelli World Challenge at Road America, as a thrilling four-car battle for the win was ended by a late-race crash.

Polesitter Jade Buford (SIN R1) just held off Brett Sandberg’s KTM at Turn 1, who was shuffled back down to fifth out of Turn 3. Scott Heckert’s SIN was another to get squeezed out on the first lap, dropping to 11th after running wide at Turn 5.

Points dominator Lawson Ashenbach went off at the Carousel on the opening lap, and was forced to nurse his Chevrolet Camaro back to the pits with suspension damage.

DeBoer passed Barkey for third at the restart, and then grabbed second from Dollahite a couple of laps later.

At the start of lap nine, DeBoer surged into the lead from Buford at Turn 1. Barkey snatched third from Dollahite with a bold lunge a lap later, but Dollahite fought back to retake the position – and Sandberg also took the opportunity to take fourth from Barkey.

But Sandberg then slowed with suspension damage of his own, which hampered his hopes of carving into Ashenbach’s points lead.

The race developed into a thrilling four-way battle for victory, with DeBoer holding off Buford, Dollahite and Barkey. But the excitement was curtailed as Bill Ziegler crashed his KTM into the wall exiting Turn 6.

Thus DeBoer claimed the win under yellow, ahead of Buford, Barkey and Dollahite – the last-named pair swapping places just before the caution was called.

Jack Roush Jr was a non-starter due to a brake failure in practice that wrecked his Ford Mustang.