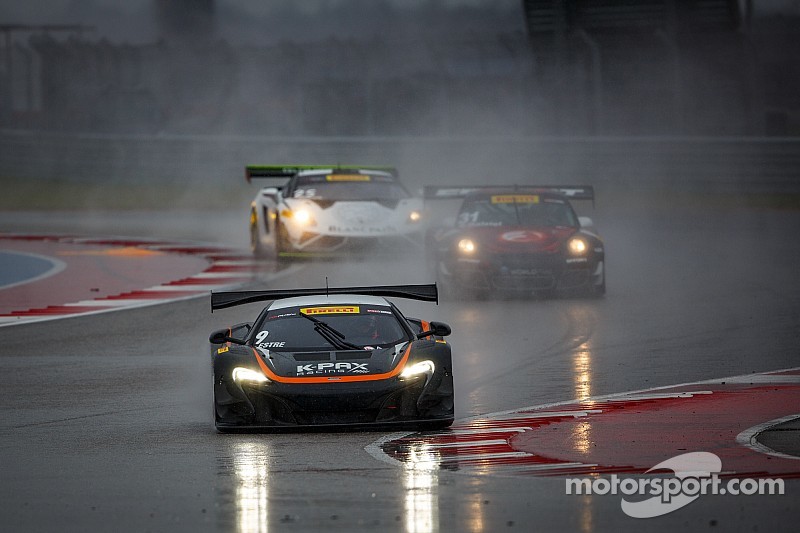 AUSTIN, Texas – Rain and 51 degrees – not the weather the Pirelli World Challenge series was looking for as they hosted the second of the two-day Nissan Grand Prix of Texas Brought To You By Motul.

But while the weather affected the crowd at Circuit of the Americas, it made for some dramatic competition in round 2 of the GT/GTA/GT Cup headline race, as Kevin Estre, in the K-PAX McLaren 650S GT3, put on a wet-weather driving clinic, dominating the GT class with an overall win.

Second was Ryan Dalziel in the EFFORT Racing Porsche 911 GT3R, who also finished second in Saturday’s round 1. Third was Nicky Catsburg in the LG Motorsports Aston Martin GT3 V12, edging out Mike Skeen’s CRP Racing Audi R8 in the late stages of the race.

Even worse weather approaching caused the PWC officials to move the race up a half-hour, but even so, conditions were treacherous at the start of the event and never improved.

One driver who didn’t mind the weather was Ryan Eversley, driver of the new RealTime Acura TLX-GT, the only all-wheel-drive vehicle in the field. Eversely picked off one car after another, including the Ferrari of Saturday’s GT winner, Olivier Beretta, on his charge up to fifth place. Unfortunately his Acura teammate, Peter Cunningham, wasn’t able to start Sunday due to damage the car received in a crash Saturday.

And one driver who didn’t enjoy the rain was Olivier Beretta, the winner on Saturday, who was eighth after a spin. Johnny O’Connell, after threatening early, ended up in seventh in his Cadillac ATS-VR GT3, after finishing third Saturday. Teammate Andy Pilgrim spun on the opening lap, as he did Saturday, but worked his way up to 20th in the 46-car field.

Estre, from Locmau, Austria, pulled out a lengthy lead, and finished 30 seconds ahead of Dalziel. “The car was so good and so consistent that it gave me the confidence I needed throughout the race,” Estre said.

We’ll post a wrap-up of the Nissan Grand Prix later. The TV coverage will air on CNS Sports Network March 14 and 18 – check world-challenge.com for details. Racing for the Pirelli World Challenge resumes March 27-29 at the St. Petersburg Grand Prix.