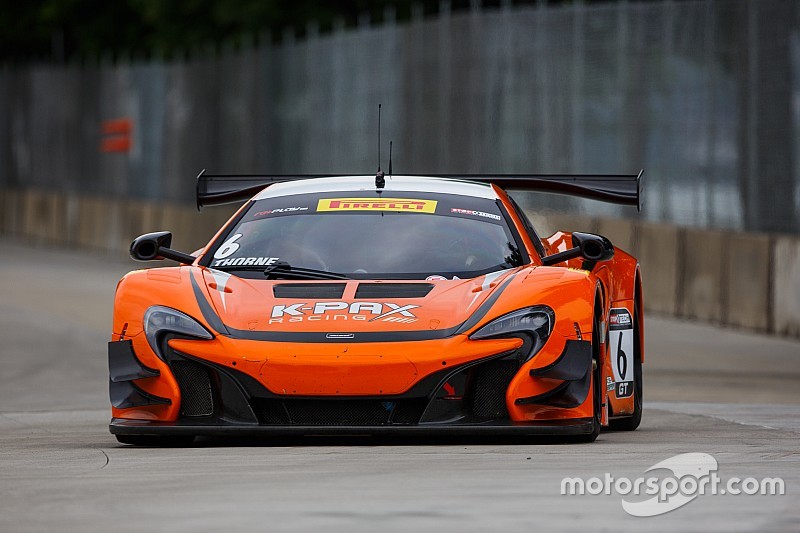 After three weeks since the previous round of racing, the second half of the Pirelli World Challenge season is about to get underway this weekend at Road America for Rounds 11, 12, and 13 of the championship. The winners of Round 10, K-PAX Racing with Flying Lizard Motorsports will race the No. 6 and No. 9 McLaren 650S GT3s at the four-mile, 14-turn road course nestled in the hills of Elkhart Lake, Wisconsin.

Contesting the only two McLarens in the race series, the team's performance so far this season has McLaren currently sitting first in the Manufacturer's Championship. With three wins and six podiums between the two drivers, Kevin Estre and Robert Thorne sit second and tenth in the driver championship standings. After the team won Round 10 at the Detroit Grand Prix, weather conditions forced the event promoters and race series sanctioning body to postpone Round 11 to this weekend's double header at Road America.

In the 2014 Pirelli World Challenge season, K-PAX Racing and Robert Thorne celebrated success at the famed road course, earning a second place finish after starting 14th. In the American Le Mans Series, Flying Lizard Motorsports earned pole position in 2012 with Marco Holzer, and in 2013 won the event with Spencer Pumpelly and Nelson Canache.

The three races will be spread out over the course of three days, with just two test sessions and one practice before qualifying. Races on Friday, Saturday and Sunday will stream live on world-challenge.tv, and re-air on CBS Sports Network Sunday, July 5, at 2:00PM Eastern.

Darren Law // Program Manager: "After almost three weeks off, it's good to get back to racing and to be at Road America. The break was the first time this season that we've had that much time between events. We used the opportunity to completely go through the cars and get them freshened up for the second half of the race season. This weekend will be a challenging one for us for several reasons. Because of some nasty weather at the Detroit Grand Prix, our Race 2 was canceled and moved over to this weekend, making this event a triple header. One of the hardest things in a situation like this is with each race, you have to be very careful not to have too much damage early in the weekend.

You don't want to spend valuable time repairing a car, or find yourself in a shortage for parts. The next challenge for us will be our package as a team. The McLaren's strong suit is handling and braking. We tend to lack in top speed on the long straights and the Road America circuit has two of the longest straights we race at, the challenge is going to force the drivers to get the most out of the cars in racing conditions through the corners. With 3 races it is a critical weekend for points, and we must come away from here with good points to be able to keep in the fight for the championship."

Robert Thorne // #6 K-PAX Racing with Flying Lizard Motorsports: "As always, I look forward to competing again at Road America. Finishing second here last year was one of the highlights for me of 2014, and I'm hoping to better that result this weekend. With three races, we'll have to make sure we race hard enough to get some good points, and still bring the car in each night with minimal damage or work required. The team has put in an excellent effort all season long and we've made some big strides. Hopefully this triple header will be another successful event to add to the books."

Kevin Estre // #9 K-PAX Racing with Flying Lizard Motorsports: "I have a bit of experience from Road America, as I drove there in GTD last year in the TUDOR Championship. I like the layout which has quite a lot of fast corners, but also long straight lines, which are not ideal for our car. Three races during the weekend make this event the most important of the season, especially as we are entering the second half and every point counts. I'm really looking forward to it and I'm sure that our McLaren will be quick on this cool track!"