Lakeville, CT - The Connecticut hills were alive with the sound of race engines this holiday week as the Pirelli World Challenge GT championships traveled to Lime Rock Park for a doubleheader. Scorching hot temperatures and high humidity made the week challenging for Randy and his No. 6 K-PAX Racing Volvo S60 team as they posted respectable showings in the practice and qualifying sessions. 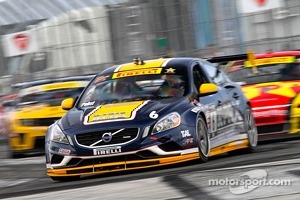 In the first race on Friday, Randy started in fourth position on a rolling start, first battling the Cadillacs and then the Audi of Duncan Ende. Lapped traffic became a major issue and kept Randy from running up front with the lead cars. On lap 20, Randy put his defensive driving talents to great use when a lapped GTS car almost ran the Volvo off the track, also allowing Ende to pass. Randy continued on to finish fifth.

"Racing Lime Rock again highlighted the interesting differences between our Volvos and the competition. In the first race we had no standing start advantage. Our hope was to run a long stint with no yellow flags to take advantage of our all-wheel drive with the hot tires.

But a caution allowed the others to cool their tires. I got blocked badly by a Mustang. I chose the wrong way I guess and he didn't know I was there. That's just part of the game in World Challenge racing. Happily, my K-PAX Volvo ran perfectly the whole race. We were able to spend Friday evening working the make the car even faster."

The field for the second race on Saturday was set by the fastest lap from Friday's race, putting the No. 6 Volvo in fifth. Randy got a tremendous launch off the standing start and raced into Turn One in second position behind the Cadillac of Johnny O'Connell. Lapped traffic again became a problem, allowing Andy Pilgrim to pass, and kept Randy from challenging for first. Randy fought for every lap and finished on the podium in third!

"My Volvo again ran perfectly and we got a great launch! I was running in second and came upon lapped traffic. The driver tried too hard to get out of the way and swerved in front of me, causing me to hit him lightly and lose the position to Andy Pilgrim. It happened in Turn Three, the same corner I lost a spot at in the first race. Frustrating. But again on a long run, we started catching the Cadillacs mid race until the yellow came out.

On the restart, a lapped GT car between me and the two lead cars removed any chance of at least putting pressure on the Cadillacs. He just wouldn't move out of my way, which was just inexperience on his part. Pro drivers show courtesy because they want the same favor the next time. The Audi was hot on my tail and it was really intense right to the finish. We are very pleased to get on the podium and have a car run perfectly once again. It keeps hopes alive for the championships."

"I really want to give a hand to the K-PAX crew for doing such a great job in the 95 degree heat and humidity. We were happy to have the company of CEO John Maloney and CFO Tim Fissinger of Volvo North America and Alexander Murdzevski, Commercial Director Motorsport, Volvo Car Corporation here from Sweden. I would also like to thank my personal sponsors Saferacer and TPC Racing for their support. Next stop Toronto."

A very happy belated birthday to Randy who turned 29 again and to Peter Schwartzott Sr who turned 74 at the track this week and is still driving in World Challenge.