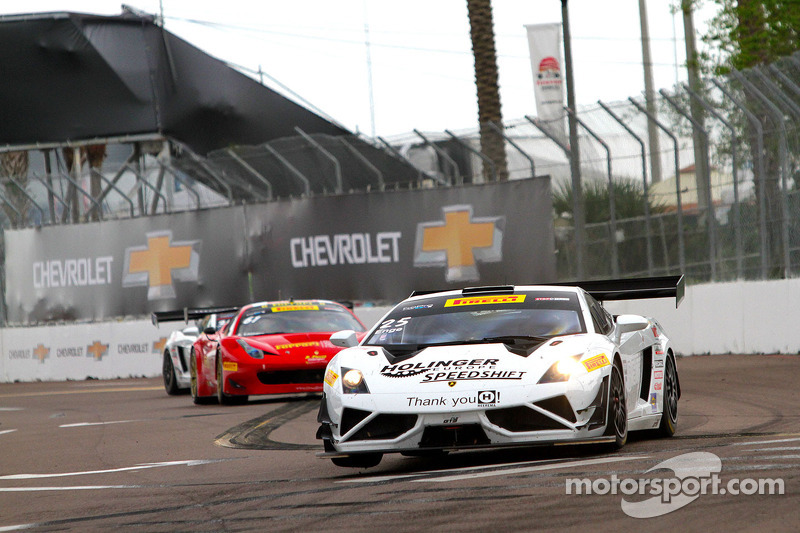 Who did what at St. Pete in the Pirelli World Challenge.

St. Petersburg, Fla. – A mix of new drivers and cars, along with some past Pirelli World Challenge champions, opened the series’ 2014 25th Anniversary season with a classic battle in the Cadillac Grand Prix of St. Petersburg brought to you by StopTech.

Enge, of Liberec, Czech Republic, made the decisive pass in the No. 25 Reiter Engineering Lamborghini Gallardo FL2 to complete a comeback victory after a slow getaway from the standing start at the 1.8-mile street circuit. Enge won by 0.775 of a second, at an average speed of 72.436 mph in the full FIA GT3-spec car. 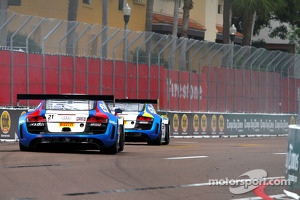 He fell back on the start, but methodically worked his way back through the field prior to the race’s only full course caution, which changed the complexion of the race.

It flew just before half distance for contact at Turn 4 between Jim Taggart, of Cary, N.C. in the No. 7 Taggart Autosport/Smartcharms.com Porsche GT3 R and Erik Davis, of Burbank, Calif., in the No. 75 Always Evolving Racing/Autotopia, LLC Ford Mustang Boss 302S.

“Unfortunately things didn’t go well at the start, obviously I dropped back, I don’t know to which place. P10 or something,” Enge said. “I knew if I kept calm and stayed out of trouble, I had a great car to come to the front and to make it back.”

Enge passed Andy Pilgrim, of Boca Raton, Fla., in the No. 8 Cadillac Racing Cadillac CTS-V.R with just more than five minutes remaining on Lap 29, taking the gap through the inside of Turn 1 to complete the move. The move netted Enge the Cadillac CTS-V Move of the Race award.

“Everything else went really well, including the pass,” Enge said. “Everything else came better, car, tires, setup, durability during the race. I’m really happy we could present these beautiful Lamborghinis here in U.S.A. with this great championship.”

Pilgrim, who scored nine podium finishes in 2013, secured his first of 2014 in the first race of the year. It was a strong effort for him, as he said the podium result was more than he expected.

“We didn’t get a great start like we thought we would,” Pilgrim said. “The Cadillac CTS.V.R was great right off of the bat. Enge did not get a good start. He had to come from way back. The yellow really helped him and hurt us. Without the yellow I am not sure he could have caught me. Enge came back to us. It was a good first race; I am disappointed not to get the win, but happy to be on the podium. It was unexpected.”

In third place overall and top GT-A classified driver was Palmer, of Chicago, in the No. 21 GMG Racing Audi R8 Ultra.

Palmer has only a handful of past car races under his belt but enjoyed a great battle with the R.Ferri Motorsports pair of Ferrari 458 Italia GT3s, driven by Anthony Lazzaro and Nick Mancuso.

“The first standing start couldn’t have gone better – ninth to second – with great race car driving and it was fun,” he said. “The Ferrari was quicker on straights, but the Audi better on the brakes. We came away with the podium finish.”

Albert von Thurn und Taxis of Regensberg, Germany finished sixth in the No. 24 Reiter Engineering Lamborghini Gallardo FL2, ahead of the two 2013 St. Petersburg race winners. James Sofronas, of Villa Park, Calif., was seventh in the No. 14 GMG Racing Audi R8 Ultra and Alex Figge of Denver, Col. was eighth in the No. 9 K-PAX Racing McLaren 12C GT3.

In GTS, defending series champion Aschenbach, of Palm Beach Gardens, Fla., took what he deemed to be a “lucky” victory in the No. 1 Blackdog Speed Shop Chevrolet Camaro.

Aschenbach and Andy Lee, of Colorado Springs, Col. in the No. 20 Best IT/Crown 7 Chevrolet Camaro, enjoyed a good fight throughout the race with Lee leading most of the event until he was held up by slower traffic on Lap 26.

Aschenbach seized the momentum at that opportunity, in the Invisible Glass Clean Pass of the Race award. After winning six races en route to his third series championship in 2013, he has his first win of 2014 in the first race by 0.839 of a second.

“I never really believed in luck until today,” Aschenbach said. “It was Andy’s race – he got sort of messed up going into I guess Turn 4, and I was lucky to get around him. We got fortunate today and hopefully we can be better for Long Beach.”

Lee, twice a polesitter at St. Petersburg and a frequent lap leader at the track, came up short of a track win here once again. But it was a fighting effort from the third-year driver and 2012 GTS class rookie-of-the-year.

“I don’t know how many laps led I’ve led here without winning,” Lee said. “Every year this place seems to bite me in one way. I thought he’d open the door, but he turned down on me. He didn’t do it on purpose. That’s part of getting around here. The Best IT crew gave me a phenomenal car.”

In third place was polesitter Jack Baldwin, of Marietta, Ga., in the No. 73 RESET-MD/Motul/StopTech Porsche Cayman S. Baldwin, who won both St. Petersburg races in 2013, was slightly behind the Camaros for most of the race but was pleased with his third St. Petersburg podium in the last two years.

“We lost a bit off our starting position, but the race was good from my point of view,” Baldwin said.

There were several other cars were stopped on course within the final 15 minutes, but were offline and did not require a full-course caution.

Results and points are unofficial until posted as final, and will be posted in due course.

The next round of the 2014 Pirelli World Challenge Championships’ season is the Roar By the Shore presented by Kia in Long Beach, Calif. on April 13, part of the Toyota Grand Prix of Long Beach weekend.