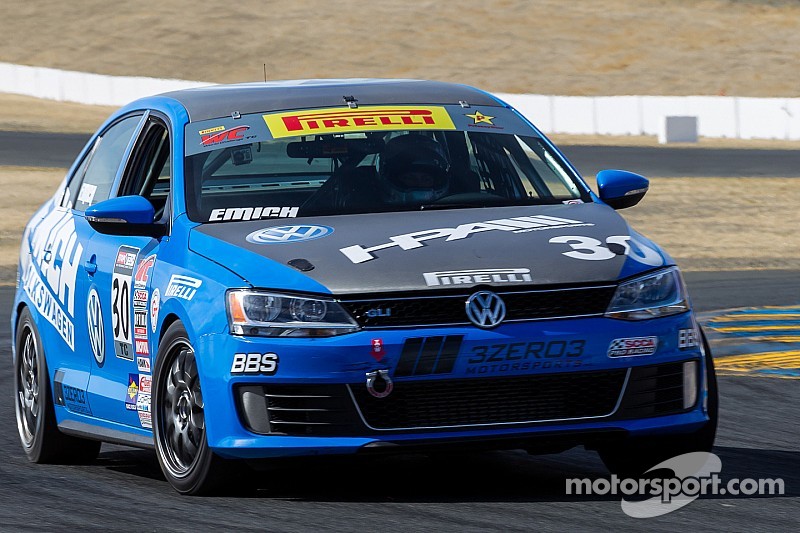 One weekend remains in the PWC season.

Fred Emich (Touring Car) took his first win of the 2014 season while Ernie Francis Jr. (Touring Car A) and Johan Schwartz (Touring Car B-Spec) doubled up in Sunday's Brainerd International Raceway brought to you by Kia Round 12 of the Pirelli World Challenge season.

Emich's win is the first of his career while Francis Jr. earned his 10th win of his career, and third this season. Schwartz's second straight win is also his second in his career.

In TC, Emich (in photo), of Denver, Col., in the No. 30 Emich Volkswagen Volkswagen Jetta GLI started third but was already up to second by the end of the first lap. A move for the lead on polesitter and Round 11 winner Karl Thomson, of Toronto, in the No. 72 CTF.org/Touge Tuning/Racing4Research Honda Civic Si on Lap 2 was awarded the Cadillac CTS-V Move of the Race.

Never challenged from there, Emich led the final 23 laps in the 24-lap, 40-minute race and won over Thomson by 2.319 seconds.

"It's awesome, couldn't feel any better," said Emich. "I did want to get the race done about half way through, I was nervous. Thomson was chasing me and charging hard. There was no room for a mistake, dicing through the TCB traffic, it was difficult. I'm elated."

"We had a motor that went out in testing that we had to replace," added Emich. "We had a fire in the electrical harness. We came out yesterday and we were fast, but we had a tire go out. I can't give my crew enough credit for putting the car back together."

Ray Mason, of Blacklick, Ohio, in the No. 71 Grand Alarms Honda Civic Si finished third in TC in the second Compass360 Racing entry. Mason made the pass for the final podium position on Lap 21, getting around Michael Pettiford, of Louisville, Col., in the No. 42 Go4It/Hawk Brakes Pontiac Solstice.

TCA was also a straightforward affair with Francis Jr., of Dania, Fla., in the No. 98 Breathless Performance Mazda MX-5, completing his second straight dominant drive from class pole. Francis Jr. started fifth overall and finished in the same position, and first in TCA with a margin of victory of 23.853 seconds.

"Had a real good weekend and a real good race today," said Francis Jr. "Just tried to get a good start and not look back. I was able to pull a nice gap and keep it going out front. The team did a great job getting the car running good and handling on rails all weekend.

Behind them, Jason Wolfe, of Mt. Vernon, Ohio, in the No. 36 Wolfe Trucking Kia Forte Koup made it to second following a late race pass of Jason Cherry, of Gambrills, Md., in the No. 13 Autism Society of America/Avpro/Purposeful Architecture Mazda MX-5 on Lap 21. Cherry had hit traffic in a poor spot, and Wolfe was able to capitalize.

Shea Holbrook, of Groveland, Fla., in the No. 67 TRUECar/Lucas Oil/Radium Honda Civic Si, hounded Wolfe the whole race but was unable to make a pass attempt, and was stuck with a fourth place finish. Wolfe will extend his class points lead as a result.

As on Saturday, the TCB fight among the top four was gripping throughout the entirety of the race. Only 1.847 seconds covered the top four at the checkered flag. But while several drivers led on Saturday, just two, Schwartz and polesitter Paul Holton, led on Sunday.

Schwartz, of Denmark, started third in the No. 12 Promatex/ADA/Animas American Honda Honda Fit. He made the move on Holton, of Tallahassee, Fla., in the No. 65 Radium/TRUECar/Lucas Oil Honda Fit for the lead on Lap 3 and never looked back en route to the win. This is the Garrett Racing/Drive4Diabetes team's third win in a row in TCB.

Schwartz took home two specialty awards. His move on Holton was the Invisible Glass Clean Pass of the Race, and he also secured the StopTech Brake Late, Finish First award for the win itself.

"It feels fantastic to win two in a row," said Schwartz. "From the outside it probably didn't look as hard as the first win yesterday. But I had to hit my marks and really be consistent because those guys were just waiting to pounce on me and make the pass.

"I got a good start, right up to second behind Paul," added Schwartz. "My plan was to stay behind Paul for a while and build up a lead so we could kind of not have to battle four cars instead of two of us later. I think he was overdriving a bit and I felt I was should make the pass and lead. And he was smart enough to stay with me."

Holton was on pace for a runner-up finish but fell from second to fourth on the final lap. As a result, Glenn Nixon, of Mission, B.C., in the No. 58 Racing.ca/LaptopScreen.com/ Nixon Prosports Mini Cooper and Tyler Palmer, of San Diego, Calif., in the No. 37 MINI USA/Mobil 1/Flying L Racing/ThePainter'sFriend.com/ Discount Tire Mini Cooper were both able to leap into podium positions with Holton falling to fourth on the 22nd and final lap.

The TCB title protagonists, Brian Price, of Middletown, Va., in the No. 51 Carsquare.com/Unlimited Racing/RP Performance Honda Fit and Nathan Stacy, of Owasso, Okla. in the No. 14 MDG/Ford Racing Ford Fiesta finished fifth and sixth.

Michael DiMeo, of Toronto, has the TC championship lead despite not racing this weekend. Wolfe will lead Holbrook in TCA, and Price extends his gap to Stacy in TCB. Palmer made slight inroads to Price with his third place, but not enough to overcome the 100-plus point deficit he faced entering Round 12.

Rounds 13 and 14 of the season, the final two races for Pirelli World Challenge in 2014, will be held at Miller Motorsports Park in Tooele, Utah outside Salt Lake City Sept. 12-13.