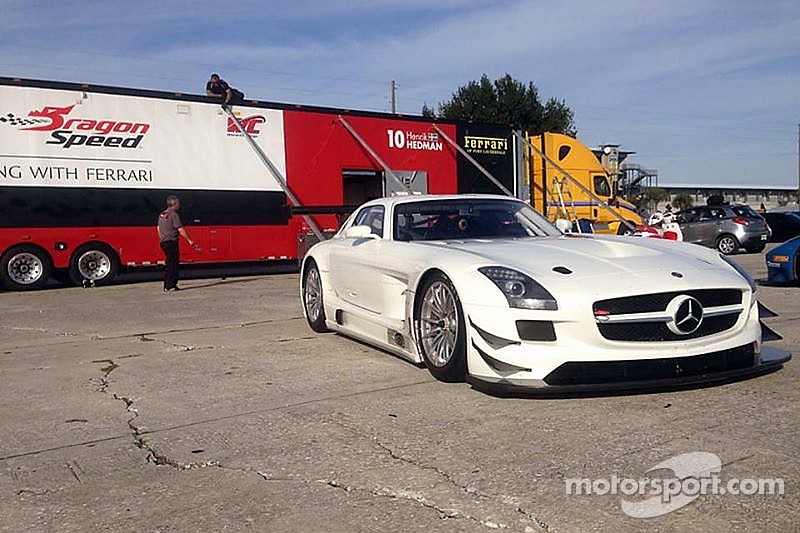 The team is switching to Mercedes and doubling its efforts ahead of next season.

The Florida-based DragonSpeed team is doubling its commitment to the Pirelli World Challenge by fielding a four-car effort for the 2015 season featuring a trio of Mercedes-Benz SLS AMG GT3 machines competing in the GT-A (amateur) category plus an entry in the series’ new GT Cup class for the latest Porsche 911 GT3 Cup model.

The driver line-up will be led by returnee Henrik Hedman, 46, who was GT-A class runner-up in his and the team’s debut PWC season, the Swedish native and Fort Lauderdale resident celebrating his US citizenship with a special livery in 2015. He will be teamed with a pair of young yet seasoned endurance racers, Eric Lux (26) of Williamsville, New York, and Frankie Montecalvo (23) of Highlands, New Jersey. Puerto Rican teenager Victor Gomez Jr (18) joins the PWC ranks following a promising showing in the Ferrari Challenge in his first year of racing.

“We found the home we were looking for in PWC this year and, just as we hoped, the series has made it possible for us to expand our program. We have terrific drivers who are here because of the talent and spirit of the crew as much as the results we put down in 2014. We’re also honored to have the opportunity to fly the flag for Mercedes with an amazing car backed up by outstanding support, and look forward to delivering for them in PWC.”

The core of the DragonSpeed crew is unchanged for 2015, with Mark Schomann continuing as the team’s chief engineer supported by performance engineer Leon Gutfreund, and chief mechanic Steve Gysin overseeing a crew led by Matt Lobrutto and Josh Ferguson. The team is also adding a trackside team manager and team administrator to its strength this season.

“For me, it's a no-brainer to continue in the Pirelli World Challenge. 2015 will be more competitive than ever, so it won’t be easy to repeat last year’s results, but we are progressing as well. With the switch to the Mercedes for 2015, we believe we have a car better suited to the PWC circuits, especially the street courses. Being with DragonSpeed is a big plus for me as well. Even though the team is getting bigger, everyone is committed to keeping the family feeling which made 2014 such a great season – on and off track.”

“I’ve enjoyed racing a lot of different cars in endurance competition over the last decade, but never tried sprint racing before, so I’m really looking forward to racing flat out and no fuel strategy. It’s also great to be heading back to GTs full time, and the Mercedes looks like one quick taxi cab! With DragonSpeed, I’m confident I have the right team to go with the right car. They had an awesome rookie season in the series last season and I’m looking forward to working with Elton and his first-class crew again.”

“I’m excited to be racing with DragonSpeed in Pirelli World Challenge next season. It’s a bit of a homecoming for me, as Elton and I were teammates at Gunnar Racing back in 2010 and I’ve worked with head engineer Mark Schomann for most of the last five years in the ALMS, ELMS, and WEC. Both sprint racing and GT3 will be new challenges for me, but taking them on with DragonSpeed gives me a lot of confidence. Getting the most out of a GT car means driving on the edge, and the sprint format means I’ll be able to stay on there from flag to flag!”

“I learned a lot from working with Elton in Ferrari Challenge this year, so joining DragonSpeed for my next step up the ladder is natural. Entering the Pirelli World Challenge in the new GT Cup class is a great way to continue my development as driver. It will also be an honor to represent Porsche since my family’s business includes the Porsche distributorship in Puerto Rico!”