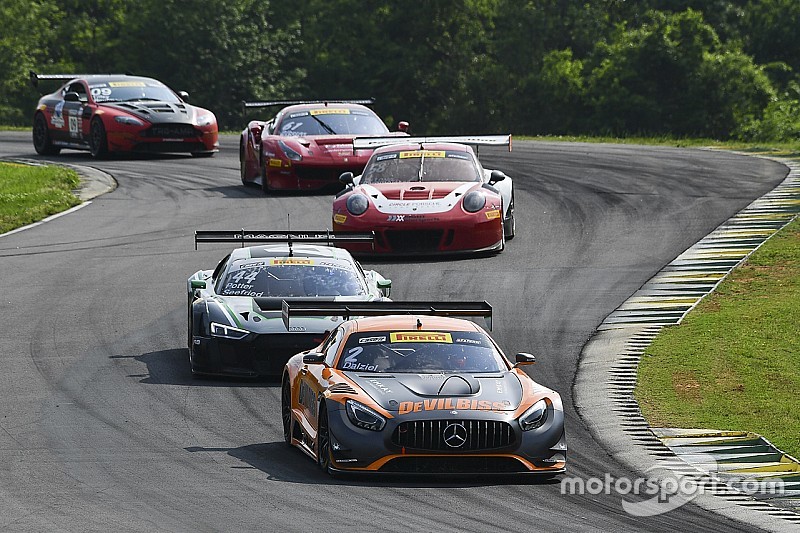 Pirelli World Challenge star Ryan Dalziel says the pace of new teammate Daniel Morad was key to their victory in the second SprintX race at Virginia International Raceway on Sunday.

Dalziel and Morad took a dominant win, with Morad driving a dogged opening stint to keep Jeroen Bleekemolen’s similar Mercedes AMG GT3 at bay to hand over the lead to Dalziel.

Dalziel converted this to a convincing victory – the first for the CRP Racing team in over two seasons in PWC – and it came just a day after being penalized from a likely winning position in the opening race on Saturday due to a pitlane timing issue.

“We knew coming here the Mercedes would be strong,” said Dalziel. “The only variable was how Daniel would adjust to having the engine in the front. This was, for sure, his race. It was pretty easy for me.

“A little bit of redemption for us after yesterday, but Daniel did awesome in a pressure situation.

“It’s not been the best start to the season, so it was a big weekend for us, and you’re only as good as your last race so we’ll just enjoy this one. Right now I love the SprintX format, but we need to take a good look and see if it helps the package that we have or not.

“There were a lot of cars here, so I don’t think you can complain when you see where SprintX was last year and where it is now. I’m happy with it right now.”

Canadian Morad, a former champion in Formula BMW single-seaters and a race winner in GP3, added: “I was super pumped coming here.

“I grew up watching Ryan, so to be driving with him is great. Having him as my partner is a huge help with the learning curve in sportscars, you can’t ask for a better teammate. He’s a true class act.

“We started on scrubbed tires, and I was able to pass [Bleekemolen] around the outside of Turn 1.

“I was pushing but trying to conserve tires at the same time. It was a little bit of a challenging race, even though it didn’t look like it.

“I was just trying to mind the gap and the tires and just hanging on until I got the call to hand off to Ryan.”