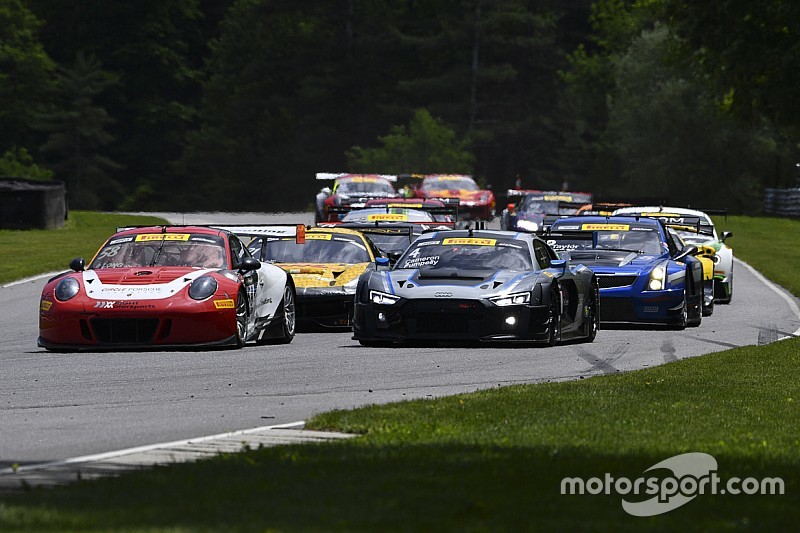 Austin, Texas – The 2017 Pirelli World Challenge Championships are living up to its expectations at the halfway point of the season including some of the most intense and competitive battles in numerous sports car divisions.

It figured to be tough to better the last race and final lap drama of the 2016 GT title run with Alvaro Parente, Patrick Long, Johnny O’Connell and Michael Cooper all in the hunt. But the new SprintX format with two-driver pairings in 60-minute shootouts has already produced five different teams and manufacturers winning in the first five events.

The next SprintX weekend is set for August 11-13 at the Utah Motorsports Campus in Grantsville, Utah, with all of the Pirelli World Challenge categories will be in action.

Looking over the GT Overall point standings which include GT Sprint and GT SprintX races, young Michael Cooper of Syosset, N.Y., the 27-year-old driver of the No. 8 Cadillac Racing Cadillac ATS-V.R. sports car, holds down the current advantage over 2011 PWC GT champion Long and 2016 PWC GT titleholder Parente, 145 to 135.

Cooper, teaming with Jordan Taylor in the SprintX events, has recorded one win, one second and one third in SprintX as well as a fifth and seventh in GT Sprint races. Long, in the No. 58 Wright Motorsports Porsche 911 GT3 R, has one GT Sprint and GT SprintX victory in 2017 with Parente, in the No. 9 K-PAX Racing McLaren 650S, having two GT Sprint wins.

Cooper and Taylor head up the separate GT SprintX points at 107 followed Dalziel and his teammate Daniel Morad at 84, Lime Rock Round 6 winner Spencer Pumpelly, in the No. 4 Magnus Racing Audi R8 LMS, at 82, the Bentley pair of Adderly Fong and Vincent Abril at 73 and Long, a race winner with Marc Lieb in Round 5 at Lime Rock, at 66.

Parente and Long continue to be just one point apart in the PWC GT Sprint class with Alvaro at 70 and Patrick at 69. Ferrari’s Alex Riberas has 54, Sellers 50 and O’Connell 43. The next GT Sprint Rounds 4 and 5 are set for June 23-25 at Road America.

In the GT manufacturer points, it is extremely tight with Porsche at 53, McLaren GT at 52, Cadillac at 51, Audi at 39 and Ferrari at 35

In the GT SprintX Pro/Am points, Michael Schein (Am) and Jan Heylen (Pro) advanced to the lead following a double win last weekend at Lime Rock Park. The No. 16 Wright Motorsports Porsche 911 GT3 R duo have 119 markers to James Sofronas, in the No. 14 GMG Motorsports Porsche 911 GT3 R, at 104 followed by Yufeng Luo, in the No. 78 Absolute Racing Bentley Continental GT3, at 95 and Tim Pappas (Am) and Jeroen Bleekemolen (Pro) at 91. In the GT Cup SprintX points, Allesandro Bressan/Yuki Harata lead the Pro/Am standings with Joe Toussaint/Cory Friefman top the Am/Am points.

Schein also leads the GTA Sprint standings with 69 over Sofronas’ 63 and Mike Hedlund, in the No. 98 K-PAX Racing McLaren 650S, at 53. Preston Calvert leads the points in the GT Cup Sprint points.

But it is former GT series champion Lawson Aschenbach with the big GTS point lead after seven podium finishes in eight races in the new Black Speed Shop Chevrolet Camaro GT4R with 173 points. Martin Barkey holds second at 127 in his Mantella Autosports KTM XBow followed by Baptista at 117, 17-year-old Nate Stacy at 104 in the No. 14 Flying Lizard Motorsports Porsche Cayman GT4 Clubsport MR and Anthony Mantella at 100 in the No. 8 Mantella Autosports KTM XBow.

Aschenbach’s Blackdog Speed Shop teammate, veteran Tony Gaples, holds the GTS Am point lead with 141 over another GTS veteran Mark Klenin with 127 in the No. 62 Tender Belly McLaren 570S. Klenin scored his first PWC GTSA win last weekend at Lime Rock Park. George Kurtz is third in GTSA points at 124 in the GMG/Crowdstrike McLaren 570S followed by PWC newcomer Jason Bell in the No. 2 Racer’s Edge SIN CAR R1 GT4 at 121 and Adam Merzon in the No. 018 Case-It Racing Porsche Cayman GT4 Clubsports MR at 118.

Holton impressive with new Audi in touring car so far

Young Paul Holton, 20, has been sensational in his No. 71 C360R Audi RS3 LMS sedan in the 2017 Touring Car division with two victories and three runners-up finishes in the first six TC races. The Orlando, Fla., racer posts 136 points at the midway portion of the TC season.

The S.A.C Racing pair of defending TCA champion Elivan Goulart and VIR double winner Matthew Fassnacht are in a battle for the TCA point lead with Goulart, driving the No. 70 S.A.C. Mazda Global MX-5 Cup, at 140 points and Fassnacht, in the No. 74 S.A.C. Mazda MX-5, at 134.

Dean Copeland, in the No. 07 Copeland Motorsports Mazda Global MX-5 Cup, holds down third in TCA points at 112 followed by Eric Powell, in the No. 23 Tech Sport Racing Mazda MX-5, at 110 and former TCB series champion Tom O’Gorman at 99 in the No. 94 Shea Racing/HPD Honda Civic Si.