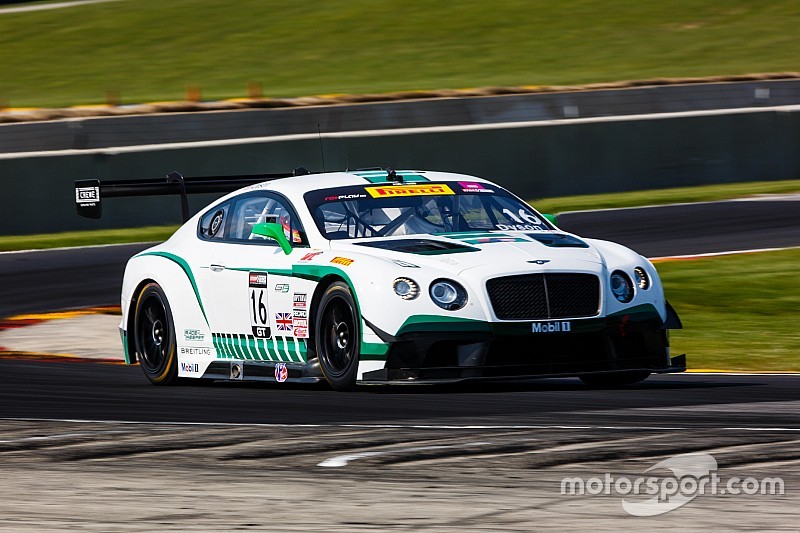 Elkhart Lake, WI – (28 June, 2015) The fortunes of Bentley Team Dyson Racing rode a roller coaster over the course of the three-day, three-race Pirelli World Challenge weekend at Wisconsin’s challenging Road America circuit. The highlight of a weekend that marked the 30th anniversary of the team’s initial Road America professional race win – and the first anniversary of the debut of the Bentley Continental GT3 in Pirelli World Challenge competition – was Chris Dyson’s strong win on Saturday.

“Chris did a terrific job today, as did the Bentley team,” said Rob Dyson, the team’s founder and CEO, and Chris’s father, who has enjoyed multiple wins at Road America since first racing here in 1983. “I couldn’t be more proud of Chris. He had a dream run.”

It was great that we were able to get our first win of the season,

Dyson started Saturday’s race from the second position on the grid. Following a good start, for the first quarter of the 50-minute sprint Dyson hounded the leading Lamborghini of Tomas Enge, passing for the lead when Enge bobbled at Road America’s flat-out kink in the middle of the backstretch. Enge later pitted to replace a cut tire while Dyson slowly extended his lead over the second-place Nissan GT-R GT3 of James Davison. A full-course yellow at the two-thirds mark in the race allowed Davison to close up on the Bentley’s bumper, but when the green came out with ten minutes remaining, Dyson pulled away comfortably.

“I knew this would be a good track for the Continental GT3,” Dyson said, following Saturday’s race. “The Bentley guys gave me an unbelievable car today, and we made the most of it. It’s not very often that you have a car that’s so good on a specific day on a particular track and I was savoring every lap. I love Road America and it’s a great feeling to win here. I grew up coming here watching my dad (Rob) race.”

The first highlight of the weekend was Friday’s qualifying session, where the Bentley’s swept the front row, Butch Leitzinger setting a lap record for the classic 4.0-mile Kettle Moraine circuit on his way to the pole (2:03.912 / 117.606 mph), while Dyson posted the second-fastest time of the session.

“The conditions were perfect, I was able to get heat into the tires and I was fortunate to get a clear lap with no traffic,” said Leitzinger, who was behind the wheel of a brand new car after his previous mount was badly damaged in a practice crash at Detroit last month. “The new car was fantastic right off the trailer. The Continental GT3 has great high-speed downforce and that’s critical at this track.”

That very promising Friday morning first turned into disappointment, followed by great efforts in the race and fifth and sixth-place finishes. Dyson’s problem began when his car experienced a steering problem part way through the morning qualifying session, fortunately after he’d set a time good enough for second on the starting grid.

With less than three hours before the cars were due to line up for the race, and once Dyson had completed his qualifying run, the crew rolled the #16 car back to the paddock and tore into the front end to find the problem – which turned out to be a faulty steering pump. This was corrected in short order but the team had left pit lane during the session, which is prohibited by the series rules. The penalty was for all Dyson’s qualifying times being disallowed, relegating him to last on the 26-car grid.

Leitzinger’s car bogged on the standing start and he dropped several spots before the car reached the first corner. For most of the rest of the race Leitzinger was trapped behind the surprisingly wide Ferrari driven by Olivier Beretta. Meanwhile Dyson was scything through the field, averaging about two passes per lap on his way to sixth, directly behind his teammate.

Saturday’s race didn’t begin well for Leitzinger, whose car stalled on standing start due to sensor issues. The long-time Dyson driver fought back to an excellent fourth-place finish. And Sunday was a disappointment all around. In another chaotic standing start for the series, Leitzinger’s car was one of three that hesitated or stalled on the grid. Fortunately his Bentley was not one of the four cars damaged too badly to continue and following another charge through the field, Leitzinger finished a respectable sixth.

Dyson started Sunday’s race on the pole by virtue of setting the fastest lap during Saturday’s victorious drive. He was running third mid-way through the first green-flag lap when he was shunted off the track and into a gravel trap. After climbing back through the field, Dyson was rear-ended again, resulting in a 17th-place finish.

The last upbeat note was that Leitzinger set the fastest lap of Sunday’s race, while Dyson posted the second-fastest.

“It was great that we were able to get our first win of the season,” Rob Dyson said. “We’ve got some work to do before the Mid-Ohio races late next month, particularly on the launch-control system, which is essential for standing starts.”