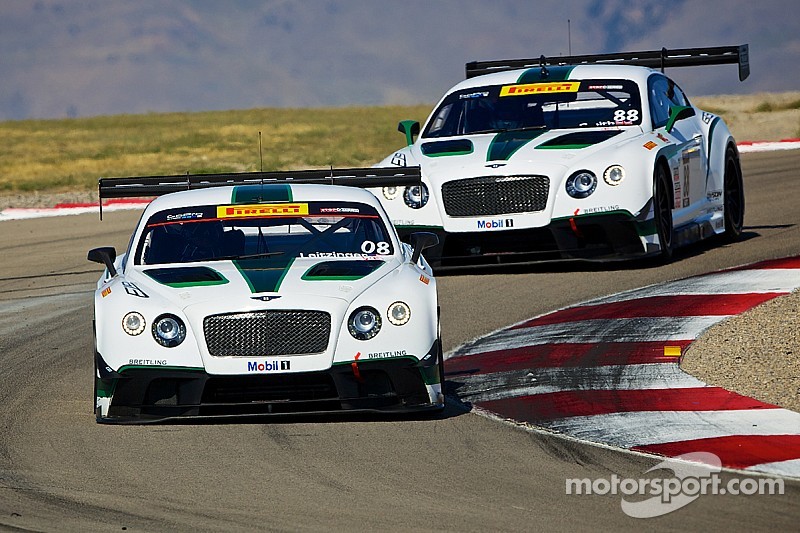 Poughkeepsie, NY - Bentley Team Dyson Racing is in final preparations for its first race of the season, the opening round of the Pirelli World Challenge at the Circuit of the Americas in Texas. At a track which is renowned for being a challenge both to car and driver, Bentley’s North American race partner is looking forward to what should be a compelling weekend of racing, according to Peter Weston, the team’s Director of Engineering:

“We’re excited for the start of the season, and COTA is a great place to begin our championship challenge. It’s a very technical circuit and needs a well-balanced car. We’ve worked hard in the off-season and we feel ready.” said Weston, who in addition to overseeing the ongoing development of the team’s pair of Bentley Continental GT3 racers has engineered sports-prototypes in both development tests and races at the Austin, TX facility that is home to the United States Grand Prix. He noted that to be quick on this circuit a driver needs a car that is “neutral with good traction. Grip is at a premium because the asphalt is so smooth. Literally, your shoes will squeak on it.”

The Continental GT3 is similar to those other production-based cars in that it has a lot of power for the size of the tires, and you have to be more conscious of managing the mass of the car,

“We’ve had a good winter test program,” said Team Bentley Dyson Racing CEO Rob Dyson. “The Bentley was a terrific car when we started racing it at mid-season last year and it’s only gotten better as the team has been able to unlock more of its performance potential.” Dyson noted that the Continental GT3 posted competitive lap times at its debut race and ended the season with a win at Miller Motorsports Park.

Chris Dyson, who drives the #16 Bentley Continental GT3, has tested extensively and raced at COTA in the 2013 World Endurance Championship. Dyson noted that the circuit presents unique challenges: “The track has a wide variety of very technical corners that place an emphasis on car placement and technique and on having a car that stops well and puts the power down cleanly. There are no other configurations of layout like this in North America. There are a few key passing areas: the dramatic Turn One and the two hairpins at the end of the longer straights. The key will be to be patient and size up the opposition and look for the right opportunities at these places on the track.”

Butch Leitzinger, driver of the #20 Bentley Continental GT3, has spent 20 seasons driving sports-prototypes for the Dyson team. But Leitzinger has also driven production-based Trans Am cars and NASCAR stock cars. Leitzinger, who in 2003 finished second in the 24 Hours of Le Mans in a Bentley Speed 8 sports-prototype, says the technological sophistication of his current Bentley produces a feel that’s closer to the sports-prototype cars than the other modified road cars he’s driven.

“The Continental GT3 is similar to those other production-based cars in that it has a lot of power for the size of the tires, and you have to be more conscious of managing the mass of the car,” Leitzinger said, also noting that Bentley had a huge advantage in terms of aerodynamic development. “It is much more refined aerodynamically. Bentley has done so much with CFD (computational fluid dynamics) and wind tunnel work. Before I drove the car I was expecting it to be kind of like a Trans Am car with low grip. I was really impressed with the downforce and what that allowed for braking – I pretty much use the same braking points as I would in a prototype – and the excellent grip the Bentley produces in both medium- and high-speed turns.”

Rob Dyson said he wouldn’t be drawn into specific predictions on the outcome of the season-opener, noting the strength of the Pirelli World Challenge field. “But I can tell you this,” he said, “the Bentley is a great race car and our team always brings its A game. I’m confident we’re going to be a major factor in the championship and it’s our goal to win it this year.”