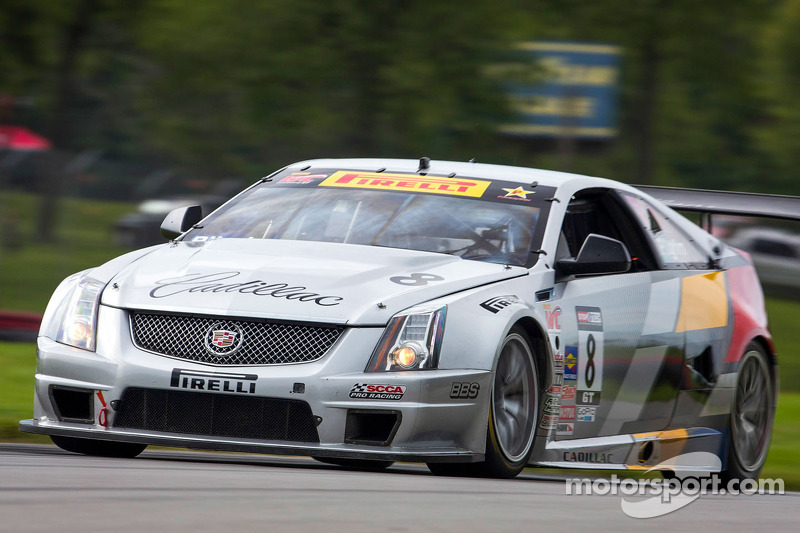 Andy Pilgrim took the GT win in his Cadillac CTS-V.R while Brandon Davis earned the GTS victory in the new TRG-Aston Martin.

Sonoma, CA - Andy Pilgrim, of Boca Raton, FL, and Brandon Davis, of Huntington Beach, CA, took GT and GTS class wins in Round 13 of the Pirelli World Challenge 2013 season, at the Cadillac Grand Prix of Sonoma. Both drivers scored their first wins of the season in the race that was part of the GoPro Grand Prix of Sonoma weekend.

Pilgrim took the No. 8 Cadillac Racing Cadillac CTS-V.R to his 12th career series victory, after leading all 27 laps of the race at an average speed of 79.561 mph, around the 2.3-mile Sonoma Raceway circuit.

"It probably looked easy," said Pilgrim. "After our troubles in practice the Team Cadillac guys did a great job to put a good car under me for the race. We had a great day, it was good win."

Duncan Ende, of Los Angeles, scored his overdue first podium of the season in the No. 24 STANDD.org/Merchant Services Audi R8 LMS, after a sterling drive from 13th and last place on the GT class grid to finish second.

"I guess we finally 'hit', rather than missed, for the first time," said Ende. "It's been a tough weekend this weekend. We had an aborted session on Friday, and my (qualifying) session got aborted on Saturday. There was obviously a bit of attrition ahead of me that helped, but it's good to get up here."

Finishing third was Ende's GMG Racing teammate and new official class points leader James Sofronas, of Villa Park, CA in the No. 14 The Thermal Club/Swisher Racing/GMG Audi R8 LMS. Sofronas takes over the position as Johnny O'Connell finished outside the top 10 for the second consecutive race.

Mike Skeen, of Charlotte, NC in the No. 2 CRP Hawk Performance Chevrolet Corvette, finished in the second position on the road, but series officials stopped scoring the driver after Lap 18. The CRP Racing team ignored repeated requests from officials to serve a drive-through penalty for avoidable contact with Sofronas on Lap 1.

The No. 2 car was shown the black flag three different times. Skeen was classified 11th after the change in position was confirmed.

Polesitter O'Connell, of Flowery Branch, GA in the No. 3 Cadillac Racing Cadillac CTS-V.R, had a challenging first lap. He stalled off the start but was able to restart his CTS.V to begin the battle of getting back to the GT field. But heading through Turn 5, O'Connell, Peter Cunningham, in the No. 42 Acura/HPD/RealTime Racing Acura TSX, and GTS class points leader Jack Baldwin in the No. 73 Motul/StopTech/Foametix Porsche Cayman S came together. All three cars sustained damage.

O'Connell wasn't the only car with issues. Randy Pobst, of Gainesville, GA in the No. 6 Alex's Lemonade Stand K-PAX Racing Volvo S60, spun on the first lap as well in Turn 2 after contact with O'Connell's teammate Pilgrim. Pilgrim felt remorse for the contact given the level of mutual respect between the two.

"At the start Randy and I went up the hill to Turn Two side-by-side," Pilgrim said. "At the brake zone I thought we were going to go through the turn together and then he came down a little and we touched and he went around. I love Randy but it sucks that I got into him. It was a racing deal, I tried to miss him. I thought he would have given me a little more room."

That promoted Skeen to second, ahead of the hard-charging Ende. Ende was never able to close enough on Skeen, who was called in several times to serve the drive-through penalty. Skeen, though, said there was a communication issue in terms of relaying the message.

For the remainder of the race, Sofronas ran close enough to Ende as they battled for third on the road but was unable to pass his teammate. Ende explained after the race that there were no team orders enforced.

Pobst rebounded to fourth place after his first lap spin. Finishing fifth in his first start of the 2013 season was Elton Julian, of Palm Beach Gardens, FL, in the No. 80 DragonSpeed, LLC Audi R8 LMS Ultra, one of the two new full GT3-specification cars running at Sonoma this weekend.

Of note, Kevin Buckler, of Sonoma, CA rebounded from a broken clutch before the race to finish sixth in the No. 66 Jawbone/Adobe Road Winery Aston Martin GT3 in that full GT3-spec car's first Pirelli World Challenge start. Jason Daskalos, of Albuquerque, NM, finished seventh in the No. 47 Vintage 423 Restaurant Dodge Viper Comp Coupe in his first start of the season. Bill Ziegler, of Ponte Vedra Beach, FL, finished a season-best eighth in the No. 95 Swisher Racing/GMG Audi R8 LMS.

In GTS, former Pirelli World Challenge GT Drivers' Champion and Rookie of the Year Davis took the first win for the new TRG-Aston Martin partnership in the No. 27 Barracuda Networks Aston Martin Vantage GT4 in only his second start of the year. It's his sixth career win.

"This deal came together late in the game," said Davis, who led 18 of 26 laps. "The TRG guys did a great job to scramble and get me ready. That really allowed me to perform well with a balanced car."

Aschenbach's podium finish is his 10th in 13 races this season and helps him in the championship chase.

"Yeah it's a huge points day," Aschenbach said. "Lost some time the first day. We were a little bit behind and it showed in the race. But still, a great job to Brandon, and the Blackdog Speed Shop Team Chevy Camaro had the the speed to get third."

From the standing start, Baldwin got caught behind the freight train of cars swerving to avoid O'Connell's stalled CTS.V. Lee rocketed to the front of the GTS field from his fourth place starting position through Turn 2 with Davis, Alec Udell and Aschenbach in tow.

"I had an unbelievable start; I can't wait to watch the on board," Lee said. "We went from fourth to first, and I almost took out O'Connell as he stalled. My mirror hit his mirror!"

The contact between O'Connell, Cunningham and Baldwin left all three cars significantly damaged, but still able to limp back to pit road. Baldwin was unable to continue from there and while Cunningham returned for a few laps, he retired shortly thereafter. It's Baldwin's first and thus far only DNF of the season and Cunningham's third in what has amounted to a frustrating 2013 campaign for the seven-time series champion.

Baldwin's misfortune opened the door for Aschenbach and Lee to close the points gap for the championship, and they took full advantage. For three laps, the top four cars in the GTS field ran nose to tail with Lee, Udell and Aschenbach all looking for opportunities to improve their positions. On Lap 4, Davis passed Lee heading under the bridge through Turn 1 into 2, which secured Davis the Cadillac Move of the Race Award.

A Lap 6 full course caution to remove the No. 34 HPD/Acura/RealTime/Red Line Oil Acura TSX of Nick Esayian, brought all four competitors even closer and Aschenbach seized his opportunity to pass Udell going into Turn 4. Ahead of him, Lee pressured Davis for laps and eventually passed him on Lap 14 in Turn 7. The move earned Lee the Invisible Clean Pass of the Race Award.

For the second half of the race, Davis returned the favor of pressure to Lee, and in a phenomenal pass on Lap 19 coming out of Turn 7 in the esses Davis was able to put the power down quicker than Lee as they went side by side through Turn 8. Davis got a nose ahead of Lee into 8a and Lee relinquished the position. The pass earned Davis the Cadillac Move of the Race Award. From there, Davis held the lead without Lee really having an opportunity to repass once again.

"It was a great battle with Brandon. We couldn't hold him off the whole race but we were having a blast. I had a lot of fun," Lee said.

Rounding out the top five in GTS were Udell, of The Woodlands, TX in the No. 17 Motorsports Development Ford Mustang Boss 302R, and Tony Gaples, of Libertyville, IL in the No. 11 Blackdog Speed Shop Chevrolet Camaro. It was Gaples' best finish of the season.

Of note, Mark Wilkins, of Toronto, ON, in the No. 38 B.R.A.K.E.S. Kia Optima Turbo gained valuable points with a sixth place finish after he was moved to the back of the field because of a post qualifying technical infraction. Prior to tech inspection, he had qualified third.

Brad Adams, of New Orleans, LA in the No. 96 Voodoo/Dat Dog/Yo MTV Raps! Ford Mustang Boss 302S, claimed the Optima Batteries Best Standing Start Award as he improved nine positions from his 13th place starting position. But a later drive-through penalty dropped him to 17th place at the finish.

Ric Bushey, of Virginia Beach, VA in the No. 51 Motul/OSGiken/SPL/Sparco Nissan 370 Z, took the Sunoco Hard Charger Award for improving 15 positions and finishing a season-best seventh.

The Cadillac Grand Prix of Sonoma airs on NBC Sports Network on September 8, at 3:30pm eastern.