Cacti, sombreros, dodgy moustaches... and an 850bhp truck on 40 inch tyres slewing sideways through the centre of Ensenada. It can only be the Baja 1000, home of the fast, the hardcore and the bizarre... and the construction truck that had crashed across the course just outside of town was only the beginning of the things that the drivers had to deal with. First guy out was Jesse James and someone joked his ex-wife Sandra Bullock had hired the truck driver to block his way, but once the race was re-started it was rocks, gulleys, washouts, holes that the crews had to contend with for the 705 miles... as well as locals digging ramps into the tracks and I even heard of someone throwing a live rattle snake at one of the cars!

Coming from Europe I am more used to the FIA Cross Country World Cup where everyone always talks about driving conservatively to save the car, being careful about what's over the next dune, but here constantly and absolutely flat out is the only strategy the teams have. This is the 44th straight running of the Baja and it is a race taken extremely seriously by the top teams. There have been enough years of development and enough money involved that the elite machines can take 15 hours of this none stop brutal punishment! 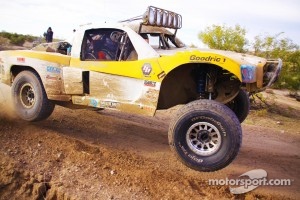 Of course, being so spread out and run in the middle of nowhere across the empty desert of northern Baja California it's hard to follow what's happening. It's not like a circuit race where every tyre lock-up is captured on film and every pit stop is timed to the second, but standing by the constantly rough track you do see plenty of action. With suspension designed for masses of travel and the insanely powerful engines the trucks have they literally fly. Because the competition is so close every corner is taken on maximum attack. Even on an easy looking turn just after a crossroads Troy Herbst spun wide and much to the joy of the cheering spectators, rolled it onto the side.

I was in a chase car for the friendly Desert Assassins team so of course saw the event through their eyes and by the time we got back to Ensenada the top guys had already crossed the line and long gone with only a few rumours hanging around the press center about what had happened out in the inaccessible desert. In the end, after an incredible 14 hours of none-stop action the three top trucks tore around the streets of central Ensenada to the finish within a minute of each other, but the first truck wasn't the winner. The start was staggered, with each truck being flagged off 30 seconds after the one in front, so it was actually second over the line, father and son team of Andy and Scott McMillin in the number 31 Ford F-150 who were declared the winners, just a scant 2 and a half minutes ahead of Nick Vanderwey and Curt LeDuc in their Chevrolet Silverado.

This is what Andy McMillin had to say as he climbed out of his car. “I got a pretty quick pace off the starts and splashed fuel at mile 77. Menzies was out front and I got by Kory Scheeler on the silt bed and I just started putting my pedal forward. I knew we were going to change drivers at Borrego and put my dad in so I wanted to get a couple of minutes on everyone just in case. Unfortunately, we had a three-and-a-half minute pit stop and we took off out of there in third and my dad had a flat tire. My dad did a great job on the San Felipe loop. We kept our pace and kept our position and Bryce was doing work out front and was running away with it. Luckily he had a little issue and we were able to make up time. I got back in the truck and Bryce pulled over for fuel and we got around them. That was the most intense race I've ever been a part of. I was 30 seconds to them and Bryce was 30 seconds to me on the beach. It was a freight-train free-for-all. It was such a blast. It was so much fun. I'm glad to win my second Tecate SCORE Baja 1000 with my dad. It means a lot."

And second placed Nick Vanderway: "What a race, holy moly! We started sixth and Curt (LeDuc) set an easy pace, wanted to take it easy and got over the summit and then he threw on the boosters and took off. I'm still catching my breath. This was something else. Thank goodness we got some fog in San Matias and at the Mike's turnoff, we practically had all of our lights off and saw McMillin's yellow light and made a beeline for it and by a miracle we got by him. It was all I could do to keep him behind me the rest of the way. It was ‘be careful what you wish for’ next time. It was intense racing. We hit so many rocks it was just unbelievable what these tires will take. This win goes to my brother John, the crew chief, the only one that doesn't get in the truck, but he put a great pitting plan together and that's what got us in front."

One of the pre-race favourites and a living-legend with the local crowd was NASCAR racer and Dakar driver Robby Gordon. His bright orange truck got the biggest cheer and there were plenty of fans wearing his Speed Energy Drink T-shirts but the race didn't quite go to plan... "We missed a turn at the 390-mile mark on a fast graded road and it spiraled and we crashed it. We were running 130 before that so we probably hit the ground at 100 and it was a big one. I haven't crashed that hard in a long time. [And then] literally two miles from the finish line, the drive shaft broke but I'm sure it broke because of the crash. The back of the truck moved over about three inches because of the crash so the drive shaft probably got jarred pretty hard." He came in 10th overall. 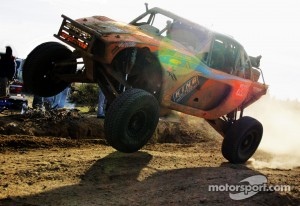 In Class 1, home of the monstrous open-wheel buggies it was 18 year old Justin Davis who came home first, in 6th overall... and did the whole entire 705 mile course on his own... over 16 hours straight behind the wheel!! "There was lots of water and mud and the car doesn't run when it gets wet. It runs on six cylinders. We steadily moved up as everybody started to break off and then it seemed to work out at the end. We knew we had to finish (to win the championship) but at end when we knew we could win, we went for it. We just took the risk and it turned out well. We won the championship and won the biggest race of the year. It was definitely a challenge and I'm looking forward to doing it next year. Maybe we'll go three in a row."

In the Production Mini class (Class 6 which is basically a slightly scaled down Trophy truck, a few inches thinner, shorter and V6 engines with only 500bhp instead of 850) it was Josh Quintero and Chris Taylor who came home first with a time just over 20 hours. But coming away with the Class 6 SCORE championship was Heidi Steele of the Desert Assassins, the team who adopted me and drove me around in their chase truck. It was touch and go a few times as they had to finish a minimum of one place behind championship rival Marc Burnett... something that didn't seem too likely as they sat in the dark for 3 ½ hours with a broken gearbox... but Marc had his own troubles too and so Heidi's co-driver Rene Brugger followed him in to take 5th in class. (A full 'insider' report on the Desert Assassins will be coming soon). 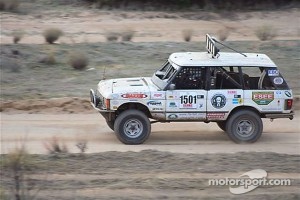 But as ever, the true heroes of the event are those racing on a budget and living the dream. On the start line I found a team running in a Range Rover that they'd pulled out of a scrap yard for $400. Pretty much everything on the car was standard, yet they left the startline full of confidence for the massive 1000 km of rough desert waiting for them. I found them in Ensenada a day after the race and Elias Christeas was still buzzing with energy even after only having a few hours sleep over the last 3 days. "It was so amazing," he smiled. "We were actually leading the class for a long while and we were overtaking Trophy Trucks. One guy in our class had a tubeframed Bronco that must be worth about $100,000 and we were beating him in a $400 Rangie! Man, there are so many stories... We got to mile 410... no, write down 411! The tracks were so rough that we didn't even know that we were driving on a flat tyre for who-knows how many miles... and we only noticed that something was wrong with the suspension when the strut started poking through the bonnet. We were still going into the second night but heard that people were falling off the cliff in front of us... and we were just about out of time, so we called it quits... but we're already talking about next year. And the biggest memory, the thing that I will take away from this... being part or the Baja racing community where the best of human nature comes out. Total strangers helping you out! Every difficulty and hardship we went through was worth it to experience that!"

And so the dust settles, the traffic goes back to normal in Ensenada, it's only 363 days until the Baja 1000's 45th anniversary and Mr Baja, Sal Fish has promised something special for 2012. 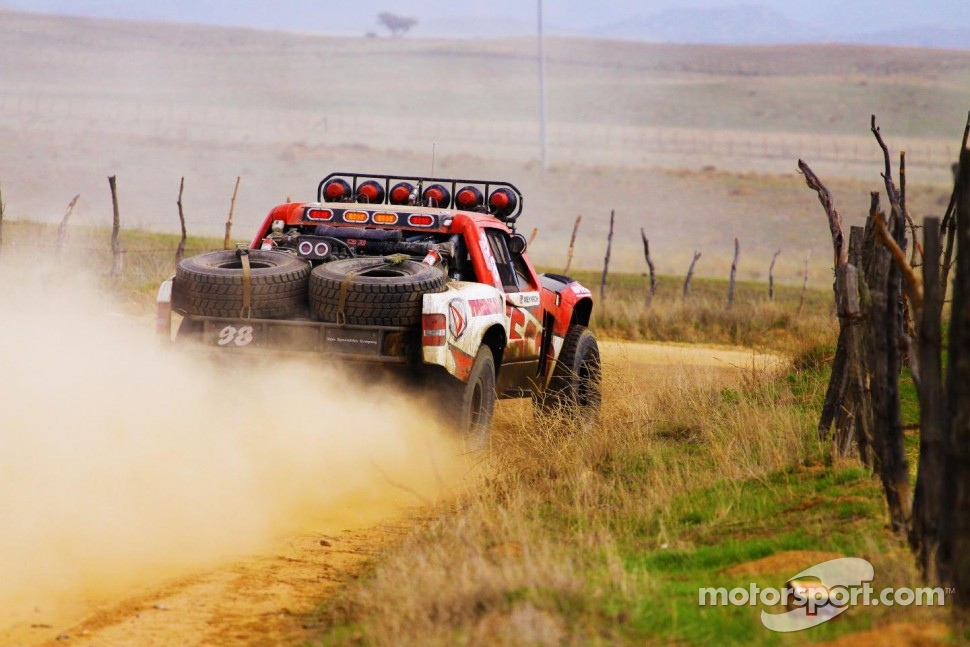 Riding with the Desert Assassins in the Baja 1000