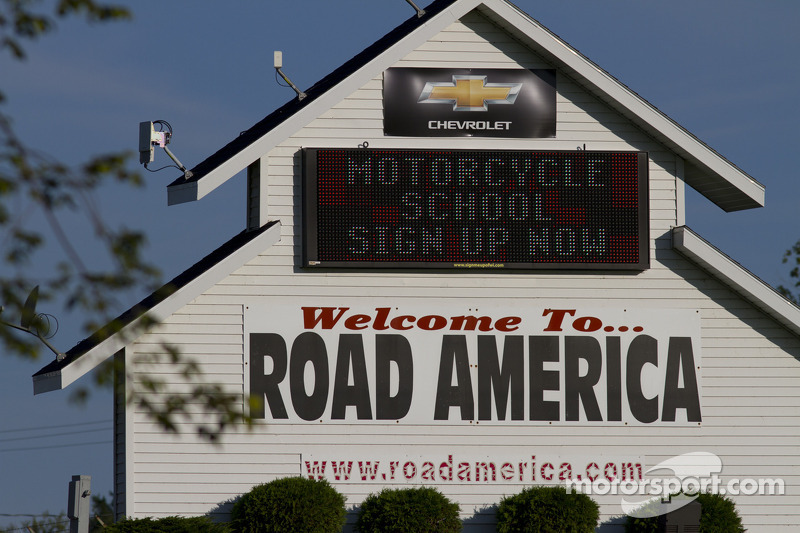 From first day of SCCA doubleheader at Road America

Picture-perfect weather greeted SCCA competitors on Saturday at the Chicago Region WeatherTech SCCA June Sprints, Round Five of the Northern Conference Majors Tour and the first of the doubleheader races at the June Sprints.

Highlights from Saturday’s action, run under sunny skies in the Kettle Moraine:

Group 1: As per tradition on Road America’s long straights, the Spec Racer Ford race was going to be settled in the draft, and probably by whichever driver made the fewest mistakes. When Brian Schofield’s No. 61 PM Racing Spec Racer Ford and Scott Rettich’s No. 17 Alliance Autosport Spec Racer got in front, that was a lock.

The two snuck away, slowly dropping competitors throughout the race with Rettich content to sit in second behind Schofield. The two ran nose to tail until two laps to go, when the shuffle started.

On lap nine, Rettich went to the front in turn five. When the pair came up on a local yellow with a car off in the kink, Schofield expected to see the checker (or a full course yellow) at the stripe the next time by and thought he’d settle for the silver medal. Worried that it was the finish, Schofield went back in front in turn 14 and held it as they came to the stripe.

Officials and the safety crew kept the course green, however, and Schofield was in the unenviable position of leading the start of the final lap. With nothing to do but put his head down and outdrive Rettich, Schofield turned a perfect lap and bobbed and weaved up the front straight to break the draft and take the checkered flag.

Group 2: The Formula 500 race may have been decided on the opening corner, as hometown racer Michael Mueller tried to move his No. 24 MJ Mfg/Fibeco/Hoosier/HRP/Speed Seat Red Devil/Rotax around polesitter Clint McMahan. Mueller bobbled in that turn, however, giving McMahan’s No. 12 Formula600Racing.com/Satellite Racing Scorpion FDS 007 a gap on the opening lap.

Once in front, McMahan held a steady gap around the 4-mile circuit, inching away by, at most, tenths of a second per lap. At the finish, McMahan was up 4.491-second on Mueller.

In Formula Vee, Michael Varacins raced away in his No. 65 Spee dsport/Veetech/Hoosier Speed Sport AM-5/Volkswagen, dominating to victory. The four-car podium battle crossed side-by-side behind him, however, with Ron Whitston (No. 5 Subway/Hoosier Protoform P2) crossing just in front of Andrew Whitston (No. 9 Rocket Motors/Subway/Hoosier Protoform P2) and Bruce Livermore (No. 37 BBBuilds/VeeTech/BRP/Hoosier Mysterian X-M2).

Group 3: Danny Steyn’s No. 39 ADEPT Studios/ROSSINI/OPM Mazda Miata was just one leader among eight cars in contention early, but the Spec Miata race came down to three top drivers sorting out the final laps alone.

With the laps winding down, Todd Lamb’s No. 80 Cahall/Driving Coach/Hawk Performance Miata was sandwiched between teammates Jim Drago and Craig Berry, left with the nearly impossible decision of going for the lead and falling to third, or staying in second to the checkered flag.

Practically attached at the bumper for the final two laps, Drago was watching the mirrors of the No. 2 East Street Racing Miata while Berry looked for any opening to move his No. 29 Berry Marble and Granite/East Street Racing Miata around Lamb. None of the three drivers made a dramatic move, and crossed the finish in that order.

Group 4: The Formula Mazda field was small at the June Sprints, but that didn’t lessen the excitement in the battle for the lead. Dale VandenBush led the opening lap in the No. 10 Lake Effect Motorsports Formula Mazda, sneaking around teammate and polesitter Jason Vinkemulder. Vinkemulder snuck back around on lap two, with VandenBush leading laps three and four.

Vinkemulder was back in front on lap five in his No. 10 Lake Effect Motorsports Formula Mazda, and edged just in front of his teammate. With clean air, Vinkemulder held the lead for the last half of the race and took the checkered flag.

Group 5: Jim Daniels had felt snake bitten lately at Road America, but when Jon Brakke pulled his No. 89 Margaret Peterson Bars Mazda Miata off on the front straight with a broken shift lever and he went around the No. 6 Hoosier/King Motorsports/Moser Racing in the carousel on lap two, the No. 176 WebLaps.com Mazda MX-5 of Daniels was in the clear.

The F Production and GT-Lite races shook out in one corner on lap two, when Ken Kannard’s F Production winning No. 51 Northwest Cable Construction/Hoosier Mazda Miata, the No. 78 JDM Motorsports/Hoosier/HPD Honda CRX GT-Lite machine of Chris Bovis, and the GT-Lite No. 18 SBS Batteries/Hoosier Tire Triumph Spitfire of Steve Sargis went three wide into the brake zone of turn 12. Sargis’ red Spitfire, on the outside of the line, let out a puff of smoke and rolled slowly off the track with suspension damage, ending his day and allowing Kannard and Bovis to follow each other through traffic to class wins.

Jim Drago, fresh off the Spec Miata win, couldn’t get his No. 2 East Street Racing Mazda Miata to fire on the grid. As the field rolled past him, his Super Touring Lite machine roared to life, and he caught the end of the field just before turn 12 on the pace lap. Drago worked through the field, and moved around then-leader Breton Williams’ No. 00 First Wealth Financial Group Mazda RX-7 on lap five to move into the lead and get clear, taking the checkered flag and sending his crew off to replace the battery in the Mazda.

Greg Gauper, former H Production National Champion and nearby Hubertus, Wisconsin resident, has won just about everything there is to win in the SafeRacer SCCA Club Racing program – now. In 27 prior tries, Gauper had fallen short of a June Sprints win at his home track. After an emotional victory on Saturday, Gauper can now check that box off of his career accomplishments.

Group 6: Jason Miller moved his No. 8 Kohler/Millenium/Hoosier WynnFurst around polesitter James French’s No. 46 Motorsports Enterprises Ltd Swift 014 on the start and led the distance by just car lengths, taking the overall and Prototype 1 win on Saturday. Richard Colburn matched him in Prototype 2, taking the win in the No. 97 Amari Metals NosTendo 2.

Jeremy Hill looked to have Formula 1000 wrapped in the No. 00 Hoosier Tire Photon VD07, but, as the saying goes, it’s not over ‘till it’s over. Hill hit lapped traffic with two to go, and watched as Alex Mayer’s No. 77 Mayer Motorsports JDR went right around him. With local yellows covering a handful of corners, Hill had to be careful where he passed both lapped traffic and Mayer, but found his way around on the final lap to reclaim the lead and the win.

Group 7: Andrew Longe’s No. 02 Trianon/Fall-Line Motorsports Porsche 911 GT3 and Andy McDermid’s No. 24 WeatherTech/Felice Performance Engines/T&A Shock Ford Mustang ran first and second overall for most of the race on their way to wins in Touring 2 and American Sedan, respectively, on Saturday at Road America.

Daniel Bender held off Jim Ebben for the Touring 4 win in the tightest race of the run group, with Ebben’s No. 8 Mazda/Hoosier/Lamers Racing Mazda RX-8 in chase. Bender’s No. 10 Bravo Trailers/Autobarn Mazda Mazda M-5 set the pace and kept in front of Ebben, eventually creating a gap by the checkered flag.

The heartbreak of the race came in Touring 3. Jeffrey Parnell had the field covered all race long in the No. 30 Retina Services of Illinois/Autobarn Volkswagen GTI, until plagued by clutch issues on the final lap. As Parnell slowly coasted up the hill to the checkered flag, three of his competitors passed him by, knocking him not only out of the win but off the podium as well. Aaron Kaplan’s No. 18 Kaplan Racing Systems BMW M3 inherited the win.

Scott Rettich, who fell short in the Spec Racer Ford race earlier in the day, went the distance with the lead in the No. 17 Alliance Autosport/PDI Communications Formula Enterprises/Ford. Rettich gapped his class by 32-seconds on Saturday at Road America.

Lawrence used lapped traffic on lap six to move his No. 40 Fan Rag Chevrolet Corvette around defending National Champion Cliff Ebben’s No. 36 Lamers Motor Racing Ford Mustang in turn one for the lead. In front, Lawrence pushed hard to the finish with Ebben just behind, but claimed the lead.

Ebben’s son, Joe Ebben, led seven laps of the GT-2 race in the No. 14 Stumpf Ford/Hoosier Ford Mustang until a suspension issue left him on the side of the road. John Kachadurian, driving the No. 80 Chicago Motor Cars/Grey Fox Racing Porsche GT3, fell back to fourth on the start, but picked his way through the field and was closing on Ebben when Ebben broke. Kachadurian finished the job, taking the checkered flag.

Round Six of the Northern Conference Majors Tour, and the second race of the June Sprints, runs on Sunday at Road America. The 13-lap races begin at 8:00 a.m. Live timing and notes, along with the track PA audio, are available at SCCA.com/SCCALive.