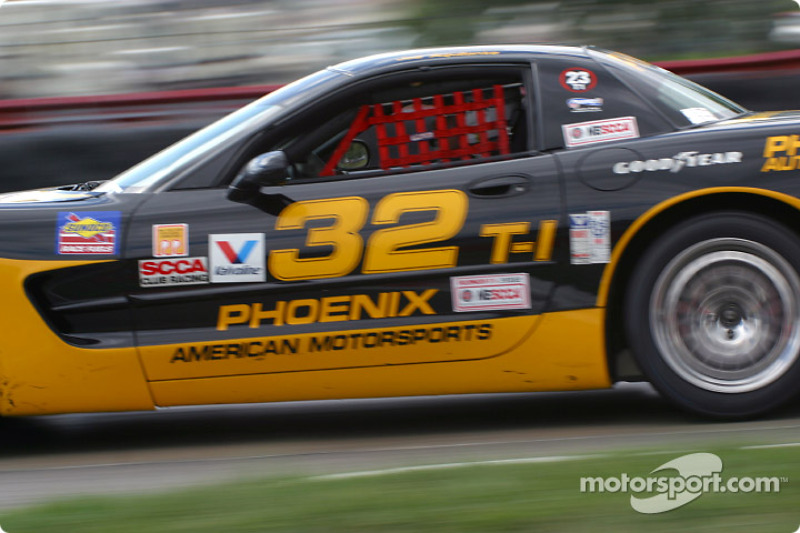 With the sun beating down, the track turned slick quickly, leaving drivers to find the available grip and get to the finish. Some drivers shined, and some struggled in the tough conditions, but at the end, 27 drivers took home trophies and wins.

Group 1: The only drama in Group One was who would take the overall win – Formula 1000 and overall polesitter Alex Mayer’s No. 177 Mayer Motorsports/Autowork JDR F1000, or the second-starting No. 39 Fahan Paving/Hoosier Tire/MAZDASPEED Motorsports Swift 016/Mazda of Chris Fahan.

Mayer pulled away early and opened up a huge lead on his class, including eventual second place finisher Jason Slahor’s No. 9 Slahor Racing Van Diemen RF-98. Mayer held the overall lead until lap 15 of the 24-lap race when Fahan went past, and lead by 4.1-seconds at the checkered flag. Mayer’s victory was by 53.202-seconds in the FB class.

Group 2: Jack Busch led flag to flag in GT-1 in the big bore group, driving his No. 05 Spectro Oils Ford Mustang to the win despite some slight mechanical problems bogging him down through the corners. The GT-2 class, however, was a battle start to finish.

Jim Boggs led early in the No. 48 Social Security Administration Chevrolet Corvette, setting the pace with pressure first from Jim Goughary’s No. 46 Red Line Oil/Hoosier Tire Nissan 350Z, and by the middle of the race from Randy Kinsland’s No. 4 Crossroad Motorsport Chevrolet Corvette was right on his tail. Kinsland moved to the outside down the back stretch on lap 17, and stayed there in the turn to the right. That left him in prime position for the switch back to the left, and from there, Kinsland was in the lead.

Joe Aquilante (in photo, from a previous event), as well as teammate Preston Calvert, left the IMSA Continental Tire Challenge race at Kansas Speedway after Friday’s qualifying to make it New Jersey Motorsports Park in time for Saturday morning’s qualifying. The decision was a good one for Aquilante, who found his No. 32 Phoenix/Hawk/Hoosier Chevrolet Corvette alone in the lead after early contact from leaders George Winkler (No. 27 Winkler Automotive Service Center Ford Mustang Boss 302S) and David Sanders (No. 73 Phoenix Performance Chevrolet Corvette). With their days over early, Aquilante cruised to the win.

Group 3: The mid-sized formula car race changed quickly on lap one when Chuck Moran’s No. 5 Ski Motorsports Van Diemen RF99 Formula Continental and Paul Schneider’s No. 73 Performance MotorCars of Charlotte/Syvel Images/Dangerous Cargo Formula Enterprises/Ford went side by side through turn four on the opening lap. Schneider, on the outside, got into the marbles and lost grip, running off the track.

Moran held the overall lead, while Justin Huffman’s No. 11 Jamison Formula Enterprises/Ford got in front of Schneider. Running nearly identical lap times, Schneider couldn’t completely close back up, and Huffman used some aggressive moves around lapped traffic to keep Schneider at bay. Moran and Huffman held on for their respective class wins.

Group 4: Calvert’s frequent flier weekend was worth it, as he drove the No. 77 Phoenix Performance/Hoosier Ford Mustang to the overall and Touring 2 win in the group. With the win in his pocket, Calvert hopped a flight back to Kansas Speedway for his night race, then will rush back to the East Coast to compete on Sunday.

The Touring 3 race was a mix of cars up front for the lead, beginning with the No. 4 Nissan/Hoosier/Red Line/Carbotech Nissan 350Z of Rob Hines. Hines, unfortunately, had contact with eventual Super Touring Under winner David Brand’s No. 31 Krugspeed/BGB Esqs Lotus Elise, and then pulled off course. Just behind him was the battle between Kevin Fandozzi’s No. 34 Insight Driven Engineering/Hoosier Tire Chevrolet Cobalt and the No. 89 Craftsman Motorsports Honda S2000 of Don Himes.

Fandozzi and Himes were different in opposite portions of the course, with Fandozzi holding on through the back, twisty part of the track and using power to get a lead on the front straight. If Himes had gotten around Fandozzi, the Honda may have gone on to win, but Fandozzi kept the point and escaped with the victory.

Group 5: The Spec Racer Ford battle was interrupted by a turn four incident involving heavy contact with the No. 38 Performance Orthopedics and Sports Medicine machine of David Dickerson and the No. 71 Hagerman Race Engineering Spec Racer Ford of John Hall, bringing out a full course caution and bunching the field.

On the lap nine restart, Bruce Myers moved his No. 28 Seacoast Physiatry machine around Robert Reed’s No. 03 IceRace.com Spec Racer Ford for the lead, and after a strong pass in turn four for third place for Brian Sullivan’s No. 2 Spec Racer, the three got away from the field.

Reed moved back into the lead through the draft in turn one on the very next lap, bringing Sullivan with him and dropping Myers all the back to third. When Myers reclaimed the second position in the same corner on the next lap, Reed had some breathing room.

Myers car was the quickest on the track, though, and it didn’t take long to pull Sullivan back to Reed. On lucky lap 13, Myers went back to the front in turn one, with Sullivan again following a car into second. To start lap 15, Reed moved around Sullivan again for second place, but neither could get any closer.

Myers turned the fastest lap of the race when he was in clean air, and held on for a 0.723-second victory.

Group 6: While Ross Devoe’s No. 14 RED Racing Van Diemen was winning Formula F and overall, and Valerie Heun’s No. 15 Scuderia Frenzinta Racing QRE QC-1 Invader out lasted the competition and held on to win Formula 500, a familiar cast of Formula Vee drivers were settling the class podium.

Johnathan Weisheit’s No. 61 JK Technologies Jk Tech XP1/Volkswagen led a Formula Vee train on lap 10 when the group, approaching Jay Beckley’s No. 60 Frenzita Racing QRE Invader QC-1 in Turn Five, suddenly saw the Formula 500’s wheel fly into the air and shoot across the track. Weisheit’s only move was to spin, and when the No. 77 ARS Inc./VeeSport Racing/AutoWerks VDF-2 of Richard Shields and the No. 72 AutoWerks/Hoosier Tire Mysterian M-2 of Roger Siebenaler snuck through, Weisheit was well behind.

Shields stalked Siebenaler, knowing that he was quicker through the back part of the track, but unsure if he could hold the lead down the front stretch. Tucked in, Shields waited until he saw the one to go board displayed by the starter, and moved around and into the lead going into turn one. Shields held the lead for the full length of the circuit, possibly getting a boost when a pair of Formula Fords moved around the Formula Vee leaders coming under the bridge under the final corner and limiting Siebenaler’s options. Weisheit was closing quickly by the finish, but needed just a bit more time to get back into contention.

Group 7: Elivan Goulart slowly built his lead in a flag-to-flag Spec Miata win in the No. 70 S.A.C Racing/SCDA1.com/Hoosier Mazda Miata, turning laps just quick enough to move ahead of the field by 3.077-seconds at the finish while, behind him, they diced for the podium.

Tyler Kicera’s No. 44 Kicera Motorsports Mazda Miata and Yiannis Tsiounis’ No. 69 Yushino Mazda Miata swapped the second position on five occasions, officially, through the race. The final time came on lap 17 of the 19-lap race, when Kicera went to the inside of turn one, and held on to the finish for second position.

Group 8: A difficult race weekend that had already involved an engine and transmission swap for Patrick Crider’s No. 89 Hoosier Tire/Jesse Prather Motorsports/Carbotech/Summit Racing Mazda Miata ended on lap nine with a blown backup motor, eliminating him from the F Production lead and costing valuable championship points, handing the class win to Jerry Hinkle’s No. 66 Element One Associates Lotus 7.

Kyle Disque, fresh off of a Northern Conference sweep at the BFGoodrich Tires Mid-Ohio Super Tour just one week ago, again took the GT-Lite win in his No. 92 Toyota/Hoosier/71 Crowd Toyota Tercel. Disque was second early but challenging for the lead when Bobby Lentz spun through the “Jersey Devil” turn, elevating Disque to the lead earlier than he had hoped and leaving him unchallenged through the finish as the fastest class car on track.

Meanwhile, in the overall lead, Chris Dryden was destroying the E Production lap record with a best lap of 1:29.119 in the No. 02 PayPal/Carbotech/Team JBS BMW Z3 on his way to nearly a full lap win. Tom Broring was the H Production winner in the No. 9 Blue Crab Racing/Mountjoy’s Auto Shop Triumph Spitfire.

Round 10 of the Eastern Conference Majors Tour runs on Sunday at New Jersey Motorsports Park with 22-lap races beginning at 9:30 a.m. Live timing and notes are available at SCCA.com/SCCALive.

More information on the U.S. Majors Tour, including results from Saturday and grids for Sunday’s races, can be found at SCCAMajors.com.