One of the tightest battles at any SCCA race during a given year is the Formula Vee race. The Valvoline Runoffs left no doubt that these were the best Vee drivers in North America. The forty Vees took the green flag and went into the turn four, ...

One of the tightest battles at any SCCA race during a given year is the Formula Vee race. The Valvoline Runoffs left no doubt that these were the best Vee drivers in North America. The forty Vees took the green flag and went into the turn four, five, six complex by going three to five wide. Minor contact, which is not unusual, did happen but everyone continued. Greg Rice continued with no nose. 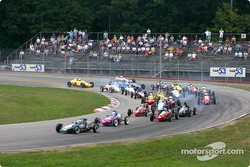 The start.
Photo by Eric Gilbert.

Stevan Davis took the early lead with Brad Stout, Donald Schanche and Stephen Oseth right on his exhaust tail. By lap two, Stout took over the lead. Oseth pitted taking him out of the lead battle. The race continued to be a trade off of the first positions.

The fans could have thought they were on one of the many freeway systems in Ohio as they watched what looked to be rush hour. On lap eleven, Davis passed Schanche for second. Gary Kittell who started twelfth was now up to fourth and Andres Serrano moved from 17th to fifth. Jeff Loughead was sitting in sixth position with the normal train of Vees following. 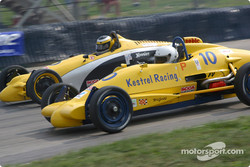 As Stout ran away and hid (24+ second win) from the others, the other competitors had tight racing and constant change of positions continued throughout the race. On lap 18 while trying to pass Davis for third, Loughead spun himself out of the battle.

Kittell and Serrano inherited second and third respectively. Stout took his third Vee title with a 24-second lead, one of the largest leads in Formula Vee history. 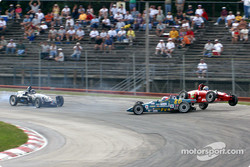 "Feels great. Thankful to be here, let alone to win the thing," said Stout. "I ran my race and was not concerned when Davis took the early lead. Wanted to allow my engine, tires to warm up and to settle myself down. I kept checking my mirrors to see where everyone was and just ticked each lap off on my own pace."

Kittell talked about the last lap accident that took place in front of him. "I was looking to see if I could get by them. Looking to pull them but was not sure if I could. Was surprised when it happened and was only seeing where I could cleanly get by and stay out of it."

"Happy to be on the podium. I have had two fourths, one fifth and one sixth," said Serrano. "I hope I can get where Brad is before I get to be -- let's say -- 65. My move up was due to having one hell of a good start - I passed a lot of cars. Then just picked off on at a time and kept my nose clean."