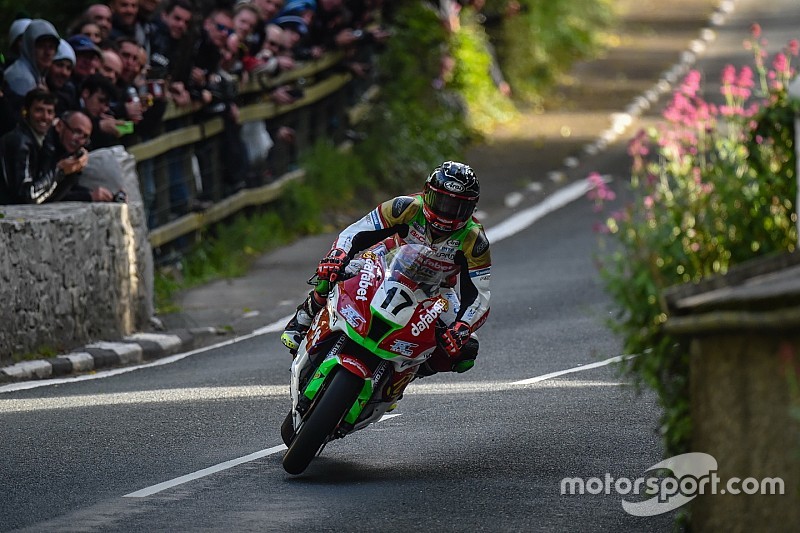 Steve Mercer has been flown to hospital off the island for further treatment following an incident involving a course car on Wednesday's Isle of Man TT practice, his Jackson Racing team has confirmed.

Wednesday's running was given a full course red flag 10 minutes into the opening Superbike/Superstock/Supersport session for an incident at Churchtown, which required the fire service after a tree was set ablaze as a result.

It was later revealed that the Churchtown incident involved Dan Kneen, who tragically died at the scene.

After a wait of around 30 minutes, the riders started to make their way back to the grandstand, where an another incident at the Ballacrye section occurred between Mercer [pictured above in 2017] and a course car, which was en route to Kneen's accident.

In a Facebook statement, the Jackson Racing team paid tribute to Kneen, who was due to ride for them in the Supersport races, and confirmed Mercer had been transferred from Nobles hospital for further treatment.

The statement reads: “I’m not too sure what to say really. Heartbroken, numb and in disbelief are a few words that come to mind.

“It’s been one of the toughest days to deal with for myself and the whole team. Dan was a great sportsman, a true professional, always full of laughter and sarcasm, his style was unique on a bike. 2018 was set to be his year!

“He fitted straight in with the team and had a bright future in front of him, the world is a sadder place without you. Our thoughts are with Richard, Ryan, Leanne and the rest of Dan’s family and friends.

“Our thoughts are also with Steve, Caroline, Daniel, Alex and family. Steve got flown off island late last night to receive further assessments and treatment following an incident on his way back to the grandstand. Get well soon Geezer!”

An investigation has been opened into how the Mercer incident happened, but no further updates have been given.