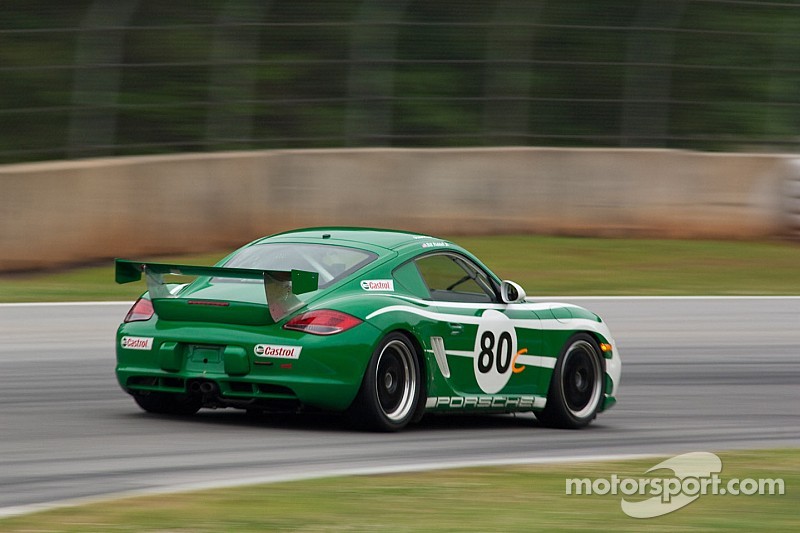 Backing up a victory in Saturday’s one-hour Enduro, White and co-driver Louis-Philippe Dumoulin won Sunday’s four-hour season finale which gave White enough points to take the Mission Foods GT3 Cup Trophy USA title. The pair of endurance wins this weekend, along with a second-place finish in Saturday’s eight-lap sprint, were enough to give White the points edge in his 2010 Porsche 997 Cup.

Riddell (in file photo above) sealed his second-consecutive Stuttgart Cup Cayman-class championship even though he competed as a Pro-Am competitor when Shane Lewis joined him and Sportsman co-driver Brad McCall at the wheel of the Cayman S. The trio finished a solid third overall in the 23-car field, joining overall runner-ups White and Dumoulin on the victory-lane podium.

Sunday also featured three first-time Stuttgart Cup winners. Henry Davis improved upon his pair of Saturday runner-up finishes in his white No. 21 Cayman S to score his first series victory in Sunday morning’s sprint race. Joe Sullivan and guest co-driver Skylar Robinson – the 18-year-old son of IMSA Champion Chip Robinson – later took to the top step of victory lane with a Sportsman class Cayman win in the four-hour race. Sullivan and Robinson were victorious in Sullivan’s No. 14 Cayman S that carries the livery of the famous Al Holbert Racing Lowenbrau Porsche 962 that Chip Robinson drove to the 1987 Camel GTP title.

The four-hour win was enough to boost Sullivan to third from fifth in the final Stuttgart Cup Cayman class final standings. Rodrigo Sales, who put together a solid first-year season despite an early retirement in the four-hour race, finished second in the Cayman-class championship.

Along with teammate Scott Leder, Stavola and Kievit made their Stuttgart Cup debuts this weekend with top Cayman entrants Bodymotion Racing. Stavola finished third in Saturday’s pair of races while Leder and Kievit also ran competitively during the Sebring weekend. “You could not ask for a better group of people,” Leder said. “When you can sit down and break bread with people and then be out on the race track with them and be competitive, that says something about a racing series. When the helmets are on, all bets are off but you’re always looking out for one another.” Kievit also enjoyed his first experience with The Stuttgart Cup. “I think it’s great the way they do things,” Kievit said. “Great bunch of guys, we’re looking forward to it next year.”

Open to Porsche Caymans and Boxsters, The Stuttgart Cup has grown rapidly in just its second season of competition. Partnering with Mission Foods GT3, which has been a fixture on classic and historic race weekends for the last several seasons, was an ideal collaboration that has attracted strong competitor interest after debuting this past April at The Mitty.

Both The Stuttgart Cup and the Mission Foods GT3 Cup Trophy USA by Car Amigo are managed by Americas Cup GT L.L.C. Both championships are sprint and endurance series with The Stuttgart Cup open to all Porsche Caymans and Boxsters and Mission Foods GT3 open to all 2000 and later Porsche 911 GT3s and related models. Rules for both series are centered on power to weight ratio. All competing Stuttgart Cup cars must compete with stock make and model engine and transmissions with approved allowances for exhaust and intake modifications. Stuttgart Cup organizers also welcome all competitors with existing race-prepared Caymans or Boxsters to compete with body and engine modifications balanced within series power to weight ratio parameters. All such competitors will not be eligible for championship points or class-designated race wins, but the door is always open to all Cayman and Boxster competitors to get in on the action.

Abu Dhabi to host final round of Maserati Trofeo series