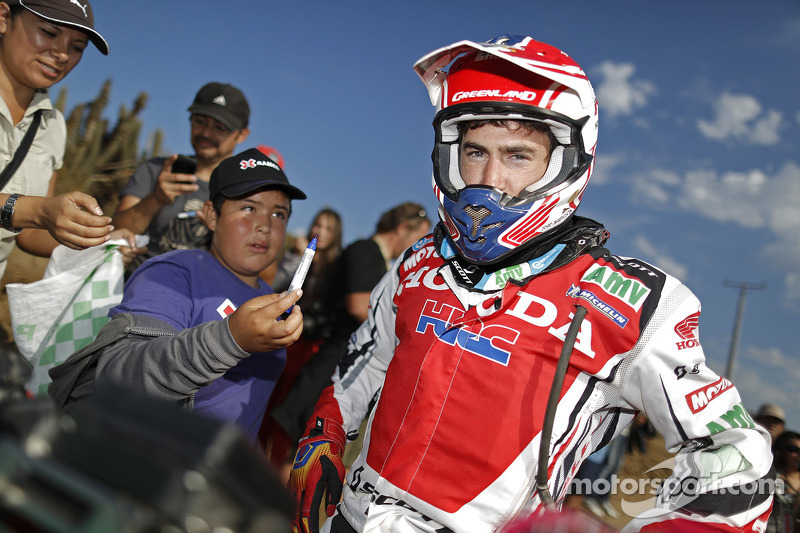 Stage updates from the 2014 Sealine.

SEALINE (Qatar): Qatar’s Nasser Saleh Al-Attiyah was the early leader of car categorie after the short opening 164.18km selective section of the 2014 Sealine Cross-Country Rally in the Qatar deserts on Monday.

Al-Attiyah was the class of the car field in his Mini All4 Racing. The 2012 winner began the day from fourth on the road and survived having to change a flat tyre after the second passage control to set a winning time of 1hr 34min 57sec. The Qatari and his French navigator Matthieu Baumel take a lead of 2min 44sec over Mini team-mates Krzysztof Holowczyc and Andreas Schulz into the second stage on Tuesday.

“It was going well, no problems and then we had a flat tyre and had to stop and change it,” said Al-Attiyah. “It was only a short stage but the navigation was very tricky. Matthieu did a great job.” “It was a good stage for me, very happy,” said Barreda. “I rode fast from the start and tried to push and then I slowed down a little in the dunes at the end. I did not want to make a mistake there. We have a good strategy for this race.”

Coma was upbeat in second position. “This is just the first day. We came from Abu Dhabi, where the terrain is quite different and there is more navigation here. We will see tomorrow.”

Emirati rider Mohammed Al-Balooshi was an impressive fourth. “At the moment my navigational skills cannot match my pace. I need to practice my navigation. I rode with the master (Coma) for a while. I really enjoyed that. Today was a great experience for me.”

Poland’s Rafal Sonik held ninth overall and was the quickest of the three quad riders on his Honda. Mohammed Abu Issa was a close second and a mere three seconds in front of Adel Hussein, who lost time after problems with his road book scroll. “After the last tarmac road, the scroll broke on my road book and I kept having to stop and turn it manually,” said Qatar’s Adel Hussein.

Abu Issa said: “It was a short stage, but very tough. Tomorrow will be cooler at the start, but the last 150km will be boiling and that’s when you get dizzy and need to concentrate. It was harder than I imagined today. I need new knuckles!”

Red Bull KTM factory team rider Sam Sunderland lost his way before the first passage control and dropped over 16 minutes to the leaders trying to regain the correct track. He finished the day in a disappointing seventh position after a late charge through the stage.

SS1 – as it happened Twenty-two cars, three quads and 15 motorcycles were joined by four cars running in a national event at the rear of the field for the start of the opening 164.18km selective section, near Umm Al-Mawaga, to the west of Doha.

Very hot conditions greeted the riders to the start of the opening section, where passage controls were positioned at the 28.82km and 97.80km points en route to a finish near Sealine to the south of the capital. The varied stage offered tricky navigation and a series of sand dunes and dry lake crossings near the finish.

Portugal’s Ruben Faria was left with the unenviable task of opening the road, with Coma and Goncalves slotting into 10th and 11th positions. The Portuguese reached the first checkpoint in 21min 48sec, but KTM team-mate Sam Sunderland suffered navigational difficulties, was forced to retrace his tracks and dropped over 16 minutes. Barreda opened up a 1min 02sec advantage over Coma heading towards PC2. Sonik was the fastest of the quads and slotted into eighth overall behind Faria, with Adel Hussein close behind.

Barreda was on a charge and the Honda rider, who started the day from ninth on the road, reached PC2 second behind Faria to extend his virtual stage lead over Coma to 2min 34sec.

FIA World Cup leader Vladimir Vasilyev led the cars into action but Al-Attiyah stormed through from fourth on the road and reached PC1 1min 02sec quicker than Holowczyc. Reinaldo Varela was third in the first of the four Toyotas.

The bikes were now reaching the stage finish and was first to the end to win the stage with a time of 1hr 42min 31sec. Coma finished second, 1min 02sec behind, and Jordi Viladoms was third. Faria lost his way after 195km and slipped down the leader board to eighth.

Al-Attiyah extended his virtual stage lead to 3min 02sec at the second passage control over Holowczyz and there was a frantic tussle for third between Marek Dabrowski, Varela and Vladimir Vasilyev.

The Qatari held on to seal the stage win by a margin of 2min 44sec, despite a flat tyre. Holowczyc was second and Vasilyev pipped Yazeed Al-Rajhi to third after Dabrowski rolled and lost time near the finish, slipping from third to eighth overall.

Tomorrow (Tuesday), competitors tackle a 396.46km loop stage through the Qatar desert, with the bikes leading the way in what promises to be a cooler and even more demanding challenge, starting at the earlier time of 07.00hrs. The event finishes at Sealine on Friday afternoon.

For more than 1 km competitors follow a track parallel to the asphalt, check-in at a passage control and then cross the main road on a fast track.

Continue along the same road for another 12 km. After a passage control, competitors cross the asphalt road.

Vasilyev moves within sight of victory in Abu Dhabi Challenge.