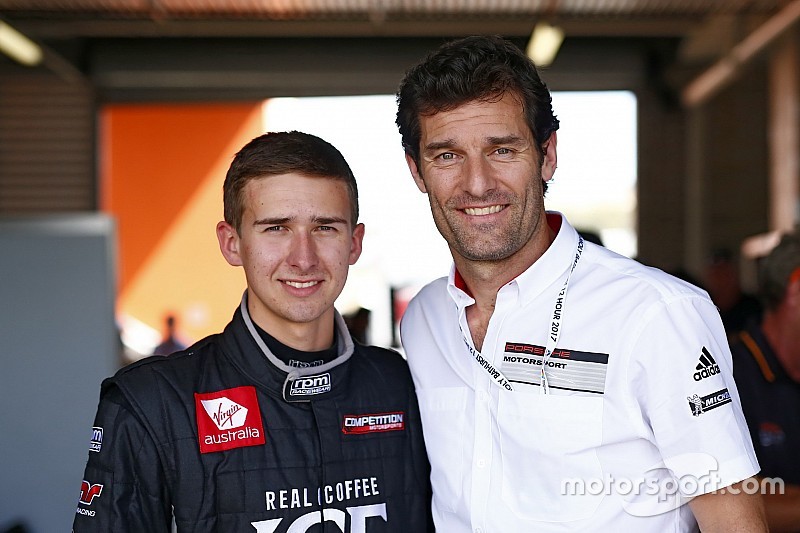 Mark Webber says Matt Campbell is “one of the most exciting talents” that has left Australia and headed for Europe in some time.

Reigning Australian Carrera Cup champion Campbell will race in the Porsche Supercup this season after winning the Porsche Junior Programme Shootout. The shift to Europe comes not only after a dominant Carrera Cup season, but on the back of a starring role as Todd Kelly’s co-driver at the Supercars endurance races, and a second place at last weekend’s Bathurst 12 Hour alongside Marc Lieb, Patrick Long, and David Calvert-Jones.

Speaking at a media roundtable at the 12 Hour, former Formula 1 driver and current Porsche ambassador Webber said that Campbell is one of the best exports Australia has produced “in a long time”.

“I think it’s brilliant that he’s got that slot; the testing went well, the evaluation went awesome,” said Webber.

“He’s got his head screwed on, we know that.

“I think the first six-to-eight months are going to be a big culture change for him. The driving will be the easy bit, stopwatch will be well in hand – he’s got the skills and the composure. It’s the out of cockpit stuff, even having more time without the creature comforts of your own backyard, that can be challenging at first.

“But I think he’s one of the most exciting talents that’s gone to Europe in a long time. That’s good for us."

While Campbell has already landed one of the best Supercars enduro seats in the field, replacing Alex Premat alongside Shane van Gisbergen at Triple Eight, Webber said he hopes the highly-rated Queenslander focuses on Europe, not on the Bathurst 1000.

“I know he’s doing the enduros. But the opportunity like this will not always be there. He’s a pro, he’s going to be fine.

“It’s a shop window for him, facilitating the Porsche opportunity to show everyone what he can do."

Interview: Kiwi Porsche star on his new life in Europe

Interview: Kiwi Porsche star on his new life in Europe