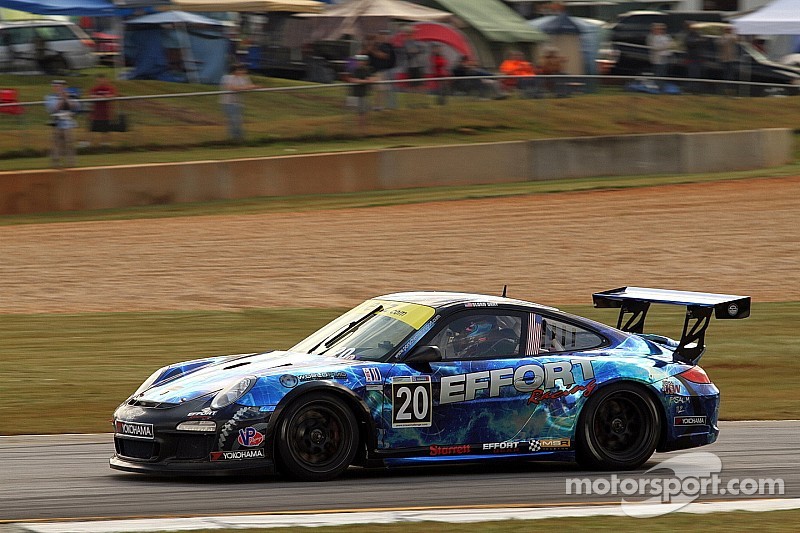 Mistake in race two drops the JDX driver to eighth.

Sloan Urry (in photo from a previous event) and JDX Racing landed north of the border to compete in the Porsche GT3 Cup Challenge USA by Yokohama, the Series' only Canadian scheduled race. After missing the podium at "The Glen" for the first time in 2014, Sloan bounced right back to grab top honors in the first round of the weekend by winning the 45-minute sprint race in impressive fashion.

JDX Racing took advantage of the promoter test day and rolled the #20 JDX Racing/Hertz Racing Porsche out on the 10-turn, 2.459 mile Canadian Tire Motorsport Park race circuit on Wednesday. Additional track time in multiple sessions on Thursday gave JDX race engineer, Luke Goldenstein, the opportunity to hand over a setup ideal for the iconic high speed road course. Sloan Urry managed to run in the top 5 in both practice sessions, later qualifying the car P4, only .160 seconds off the pole.

At the start, Urry made quick work of Michael Lewis with an outside pass in turn one. By the end of lap one he had passed the second place car of Angel Benitez with a bold outside pass at the fifth gear, turn eight. At this point Sloan set his sights on pole sitter and race leader, Jesse Lazare, and at the 12 minute mark, again, made that same outside pass at turn eight - a 120 mph sweeper at the end of the Mario Andretti straight. Following that opportunistic pass, Sloan managed to pull away, claiming his first race win of the season and third of his career in impressive fashion. It was the largest winning margin to date in 2014, claiming the checkered flag with a 12.966 second gap to the second place finisher. The second round of the weekend was much more competitive, with Sloan running most of the race in the top four. A small late race mistake and light contact with the wall damaged the drive shaft causing the JDX car to slip back in the field. Sloan managed to limp the car across the finish line in 8th.

Following the race win Sloan Urry commented, "It's a great feeling. These guys have worked hard all season - the car came off the truck fast and we were in it from the start of the weekend. I worked my way past Michael and Angel all while keeping Jesse in range. I set Jesse up the lap previous to the pass in turn 8, I was just waiting for him to defend the inside after the long back straight run and when he did it again I was all over the outside move. The car just stuck to the race surface, a high speed right-hander in 8, which gave me the inside apex to 9, it takes full commitment to go on the outside in that corner and Luke gave me the confidence with this car to do it".

Team co-owner, Harrison Brix said “We executed our plan perfectly with the first race. The crew set this car up for success and Sloan made a statement in the first round of the weekend. The #20 car was the quickest car out there and Sloan kept looking forward and made it his race. We claimed some good points this weekend but our work will continue as we are now at the halfway point of the season, there is a lot more racing ahead".

The green flag for Round 11 of the Porsche GT3 Cup Challenge USA by Yokohama 2014 season flies at 7:05 PM EST on Saturday, August 9th at Road America, followed by Round 12 Sunday, August 10th, at 10:50 AM EST. The cancelled round 6 race from Lime Rock Park will follow on Sunday at 5:45 PM EST.