Defending series champion Craig Baird was back to his dynamic best on the first day of competition at the penultimate round of the 2010/11 New Zealand motor racing championship at Feilding's Manfeild circuit this afternoon, the Triple X Motorsport team leader winning an incident-packed first Porsche GT3 Cup Challenge championship race from poleman, International Motorsport's Jonny Reid.

In the first race under the series' new title sponsor, Crown Lift Trucks, Reid got the initial jump on fellow front row starter Baird and led until the end of the second lap when Baird muscled his way past with a decisive move into the high-speed Dunlop sweeper.

Reid remained within striking distance, visibly closing the gap in the later stages of the 12 lap race, but it was not quite enough to deny Baird his sixth win of the season.

"Jonny's real good to race with, "Baird was quick to point out afterwards. "I chucked it up the inside and it could have been marginal - I know I've been there before and had to rub door panels all the way to the next corner - but Jonny is a smart operator and he gave me enough room."

Early on Baird did eke out a small advantage, setting the fastest race lap as he did so, but Reid dipped under that later as he counter-attacked.

"I knew I had to make hay while the sun shone early on, " said Baird, "because that's how I set my car up. I always want it to be quick at the beginning, particularly when, like today, I mucked the start up."

For his part Reid felt he had done everything within his power to add a race win to the pole he earned early in the day and that the result could have gone either way.

The reason was a first lap incident at the hairpin which took out Triple X teammates Daniel Gaunt, Scott Harrison and Ant Pedersen.

The trio had a coming together - which also slowed team boss Shane McKillen - and Reid lost what advantage he had on Baird when he slowed for an oil flag.

"I got a radio call saying there was an oil flag at Turn 5 and when I got there there was still debris and coolant on the track. That allowed Craig to catch up and when they also put it out into Dunlop he took the advantage. When you're the first car on the road you're always the guinea pig and I guess it was just a case of Craig's experience and his positioning on the track. It was a risk but this time it paid off for him."

Proof that Baird was definitely under threat came in the lap times, Reid eventually credited with the fastest race lap of 1.08.620, a time which - had he not set pole with a scorching 1.08.097 - would have been good enough for fourth place on the grid!

"I knew it was quick," Reid said, " but again, the secret to a good lap was getting through the water and debris in Turn 5 to get a good run up to Higgins and one lap I hit it and lost the advantage I had pulled back on Craig. But hey, I'm happy. I was enjoying myself out there, the racing is tough and hard but Craig is rated as one of the fastest Porsche drivers in the the world and I'm running right with him."

Behind Baird and Reid, Reid's International Motorsport teammate Mitch Cunningham drove a lonely race to cross the line third after another trademark lightning start, with series returnee Hugh Gardiner fourth and Simon McLennan the first of the 996 Cup entrants home in fifth. Usual protagonist Simon Evans led him for all but the last half of the final lap, only to encounter a gear selection problem within sight of the finish line.

Points-wise the race could not have been worse for championship leader Daniel Gaunt, who set the third quickest lap time in qualifying but was forced to start the first race from P8 as part of fall-out from the fourth series round at Timaru in January.

Unfortunately he had nowhere to go when one of the cars which started in front of him spun, the resultant melee seeing he and teammate Scott Harrison end their races in the pits and Ant Pedersen, making his debut for the Triple X Motorsport team in Mike Morton's car, end his at the side of the track.

There are two more Crown Lift Truck Porsche GT3 Cup Challenge races on the programme at this weekend's CRC 200 meeting at Manfeild, a second 12 lap sprint on Sunday morning and a third reverse top six grid final over 16 laps in the afternoon.

There is then a break of a month until the final round of this year's championship at the Taupo Motorsport Park over the March 12-13 weekend. 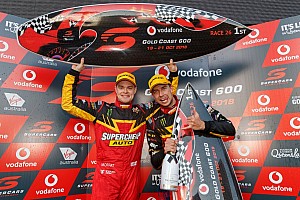