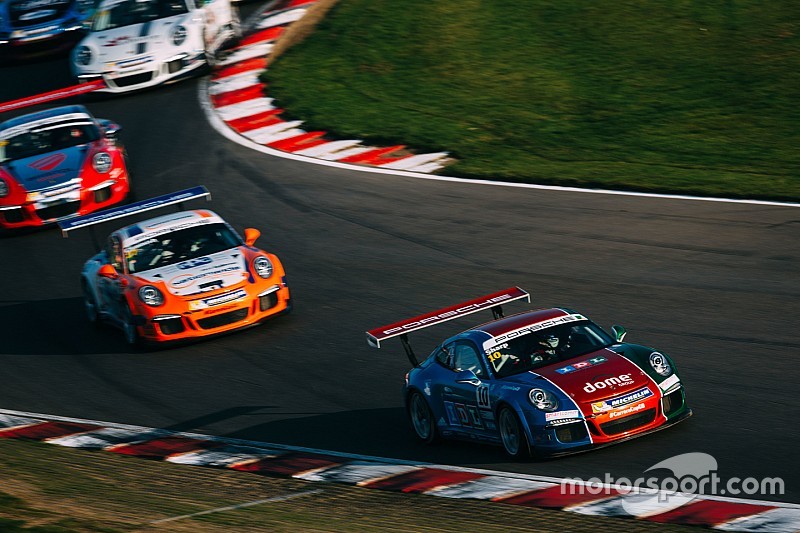 As the curtain came down on the Porsche Carrera Cup GB season at Brands Hatch last weekend, an unquestionable highlight was the dramatic conclusion to the new-for-2015 Rookie Class between IDL Racing’s Tom Sharp and GT Marques’ Dino Zamparelli.

With only eight points separating the pair going into the final race of the season, nobody needed a reminder of the stakes: the incredible £50,000 winner’s prize, one of the biggest in UK Motorsport.

At a time when other national racing series’ prize pots are dwindling, Porsche has well and truly reaffirmed its commitment to rewarding outstanding achievement.

The competition however is fierce, with a host of illustrious single-seater racers attracted by the opportunity in 2015 such as Nicholas Latifi, Ryan Cullen and Dino Zamparelli.

A superb performance by Tom Sharp at Brands Hatch where he claimed his maiden Porsche Carrera Cup GB win in Round 16, handed him the rookie winner’s prize. The delight was there for all to see as he punched the air in joy to celebrate what he openly described as the biggest win of his racing career.

“£50,000 is a massive chunk of the budget for me next year and it will allow me to mount a real challenge for the overall championship,” the 24-year-old said.

“It means that next season we can spend some more time testing, try some different car set-ups and run some more sets of tyres to find that edge in qualifying.

“For us it wasn’t realistic to think that we would be up there fighting for the overall championship in our first season so it was great that there was always a race within a race.

"I have to say that was a big draw too. You can’t ignore the - it’s one of, if not the biggest prize around and far greater than any other national series I’ve ever competed in.

“To have this achievement on my racing CV is without doubt the highlight of my career.  I would definitely recommend the opportunity to anyone thinking about it as I am absolutely delighted we took up the challenge.

"Racing with Porsche is very professional, everything is structured and all the off-track touches like the hospitality are fantastic.”

All season long the Rookie Championship has been synonymous with exciting wheel-to-wheel racing and has produced some of the closest battles throughout the field.

Sharp in particular has had to pull off some incredible overtaking moves to continue picking up consistent points and keep all-important distance to the chasing pack.

“This year we have had some incredibly good competition and I’m sure the longer the Rookie Class is out there, the more people will be drawn to it,” Sharp added.

“The win has just about sunk in now and a lot of people have sent me some lovely messages. Winning the Rookie Class gives me a lot of confidence going into next year.

“This is something that everyone in motor sport should be aware of as it’s great for success to be recognised.

"If you’re up for a steep learning curve and willing to take on board everything inside the team as well as outside the team, Porsche Carrera Cup GB is the place for you.”

Be sure not to miss a thing by following the Porsche Carrera Cup GB Championship at @CarreraCupGB on Twitter, @carreracupgb on Instagram and liking the new Facebook page: www.facebook.com/CarreraCupGB.