Here's Robb Pritchard with a recap of the second day of Ultra4 action in Italy.

The inaugural ULTRA4 Europe King of Italy kicked off in style today with some of Europe’s fastest and most capable 4x4s blasting off through the forests, ravines and hills of northern Italy.

Thanks to his stellar qualifying performance yesterday Italy’s Roberto Caini was first away but two minutes on the road behind, with a noticeably much smoother application of the power pedal, was Dodge City’s Levi Shirley in his beautiful Euro Fighter. 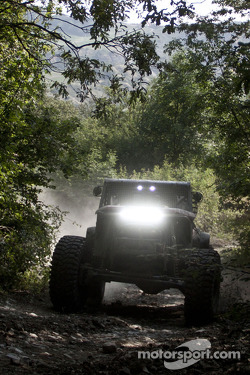 For the first few kilometres it was WRC style roads through the woods and up along a ridge, but ULTRA4s are built for the toughest tracks there are and down a tight wooded section along the side of a field it was the big rocks of a dry river bed that awaited. Ciani had a big lead here but it was Shirley who made it back to the finish first. With what might prove to be his Achilles heel Ciani caught a rock and broke the rear steering system and lost about 10 minutes fixing it. That allowed Shirley to come back to camp with roughly a 3:30 lead.

It was close behind too, although no one knew the exact times, but Stephane Zosso in his ZZ Kustoms buggy, Montatdor in his WSR and Rob Butler in the other Euro Fighter were all within a few minutes of each other.

A long lunch break was had for everyone to bask in the sun before lining up for the second loop. I had so much fun off-roading with Spidertrax’s Thom Kingston amazing Smart Car through the fields that we drove it over the hill into the next valley, much to the bemusement of a couple of marshals in a Jeep. 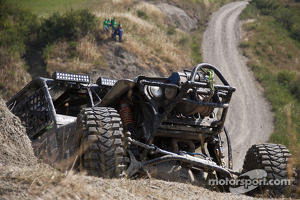 Shirley was first through the river bed but Ciani was less than 2 minutes behind, with Zosso in 3rd… although he would loose that position just a few metres past where I was standing. He had an absolute nightmare trying to change a flat tyre… and the next time I saw caught up with him, he had another… and was only carrying one spare. That meant he had to do the King Zone and final tough little tricky sections dragging the rim of a front wheel in front of him.

Rob Butler would have been a lot faster if Montador hadn’t held him up for a few kilometres. “We had the horn on the whole time and in the end just had to push him out of the way. But we’re only a couple of minutes behind 3rd so we will be trying for a podium tomorrow.”

Jaap Betsema the Frisian Fire Ant driver had a hard morning and an even worse afternoon. “The brakes failed near the end of the stage so I had to slow down with the automatic gears.” But it went very wrong on the next lap. “We had a struggle with changing a tyre so we were a bit behind but then we came over a little hill at full throttle and BANG, there was a car stuck in a hole. We could do nothing so hit it really hard, we actually ended up on top of it… And after that we had no brakes again so it was very hard on the gearbox to get to the finish.” 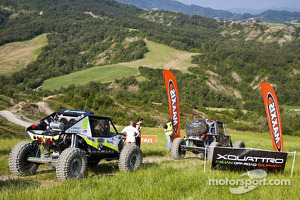 Someone else having troubles with transmission was Axel Burmann. “We blew the Atlas transfer case,” he shrugged as a marshal towed him back into camp. “We will have a look to see if it’s the cables, but if it is the ‘box then we are out.”

On my way around the campsite with notebook in hand I met the friendly Emanuel Costa, last year’s King of Portugal winner. “We couldn’t race here because we have no sponsors,” he lamented, “It’s a pity because we would love to drive on this course. But we’ll be waiting for all these teams in Portugal!”

But it’s the battle at the top that’s the talking point of the event. Despite braking off the rear anti sway bar Ciani was only 30 seconds slower than Shirley. “He drives fast and his car is good, no doubt, but we are going to see how the car is tomorrow morning and if everything feels right we will attack. It’s a completely new car, but a win is possible, so we’ll see this time tomorrow night!”

The weather forecast for tonight is for thunder storms which will make it a totally different race! Two more laps of the gorgeous 25km track stand behind a great come-back win for Shirley after his disappointing King of the Glaens run or a sensational victory for Ciani in a brand new and untested car. Or maybe someone else win snatch first. Check back tomorrow for the final story.

And in a few days we’ll give you the link of the video that my World4x4 magazine partner Vitor is putting together.