Here's Robb Pritchard with the opening day recap of the Ultra4 action in Italy.

Apparently there are some grown men kicking a ball to each other somewhere in South America. Well, you only need one ball for that. Here at the second round of the ULTRA4 Europe series, in the rolling hills near Palma, Italy, you definitely need two! Preferably ones made of steel! 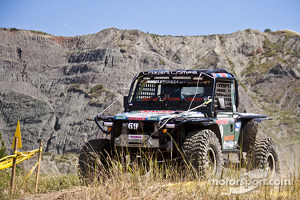 Race boss Pier Acerni, himself a two-time King of the Valleys winner, designed the track and chuckled a little evilly, a bit like a James Bond villain, when drivers asked him what they can expect on the 25km course. It’s going to be fast, very fast, some tight, technical sections in the trees, some rocks, some mud, some river crossings… basically everything an ULTRA4 course should be… and all set in the stunning Italian landscape. The queue to sign in and get our wrist bands looked pretty ordinary, except the table next to us, which as well as the ubiquitous T-Shirts and fleeces had smoked hams and cheeses on offer! We’re definitely in Italy!

23 cars passed the scrutineering checks, although some were sent back to make some minor modifications and I got to see what was going on as I walked around. The two gorgeous Euro Fighters are back in action with hopes a bit higher for more than they managed in Scotland although US driver Levi Shirley’s engine still wasn’t running smoothly. I was at their workshop in the south of England a few weeks ago and it’s still a bit mind-blowing to remember seeing the pipes stacked up that would one day become another racer like these. Team mate Rob Butler planned to take it easy… but more about how that went later… 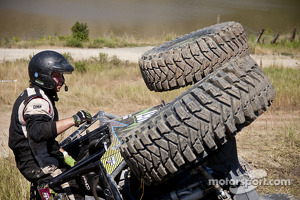 Axel Burmann showed up with two extra Jeeps that he brought down from Belgium just to get the shocks tuned by Gerard of King shocks, Stephane Zosso of ZZ Kustom in Switzerland only managed to get here in time to join the end of the queue as they’d been trying to get the car ready for three days straight. Something was wrong enough with the engine timing that the exhaust manifold was glowing red! And the locals have some beautiful new cars racing in the series for the first time. Expect them to do well.

A bi-lingual briefing, an application of sunscreen and then it was off into the countryside… and to curl up in the shade of a sponsor’s banner as the sun was seriously hot. So hot in fact that Thom Kingston of Spidertrax even took off his beany!!

Approximately 9km was the prologue and on the other side of the valley we saw the first cars being flagged off. And then… nothing… The third starter eventually came back down the track and back to the start line. The first two cars had rolled and blocked the track. This is ULTRA4! 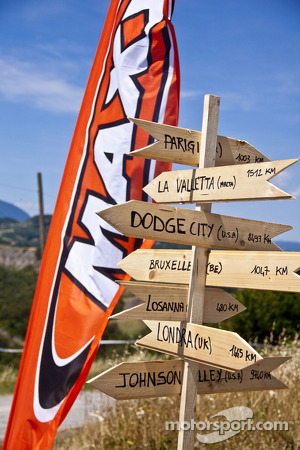 One section called the King Zone had dozens of foot-square holes cut out of it with a JCB section but Roberto Ciani in his new car drove through as though they weren’t there. Unfortunately he did the same thing with a marker arrow, which is a 15 minute penalty. “The car is smooth to drive so we are confident in it,” said co-driver Andrea Calandri and then he showed me the rear steering set up. We have two front Spidertrax axles and the rear one is controlled by a little joystick in the centre console, so we have great control in the technical stuff. But 15 minutes is a lot to loose for a silly mistake so tomorrow we are just going to get to the end of the stage.”

Nicolas Montator from the French WRS team was relaxed afterwards. “It was a beautiful track, but we found some nice hidden holes in the grass and some of the arrows were quite hard to follow so we lost a little time. But it will be great to race in this area tomorrow, we’re looking forward to it.”

Kevin Mallia all the way from Malta in his diesel powered buggy did well to get 7th. “It’s a beautiful track, lots of technical stuff which we like. But I have to say thank you to Gerard form King shocks because even though I have Fox shocks he still tuned them for me. Next time I will buy King for sure!”

Camped next door (well, when I say camped, I mean parked in his luxury motorhome) was Axel Burrman, and his co-driver Tom Olieslagers told me that the course wasn’t so hard but it was hard to judge how tight the turns were so they had to be cautious. “Then we came to deep washed out gulley and decided to try and straddle it, but it didn’t work and we fell in, so lost some time in there. But I think we got 5th, so that’s good and we are confident for tomorrow.”

On the smaller and less aggressive Maxxis tyres instead of the Boggers Jaap Betsemas’s Fire Ant doesn’t look quite so monstrous but they did well, apart from driving over an arrow. “It was a stupid mistake,” said, smiling up through the suspension as he worked on something underneath. “I just went a little too fast and caught it… But maybe the marshal didn’t notice anything, so if we don’t get a penalty you have to delete this bit!”

One of the visually quickest was Levi Shirley and he was the only one to go straight around the tricky section I was standing at, as everyone else had to 3-point turn. By completing the 9km course he also effectively doubled his 2014 ULTRA4 Europe racing distance! His Dad is on co-driving duties but was in a half-joking critical mood. “The car is nice but we went into a few corners too deep and lost a little but it was a nice mix of trails and rough stuff. It was a good shake down.”

In the sister Euro Fighter Rob Butler didn’t have quite such a good lap though. “It was the most pathetic roll ever,” he shrugged. “I thought it was going to fall back down so I wasn’t panicking, but then it kept going… I tried to drive out of it but I’d taken it out of difflock for the turn, so the wheels that were in the air just span and we went over.” It wasn’t the quickest recovery either as they were in a difficult spot, but they had done so well on the rest of the course that they still managed to finish in 8th.

Which is a lot better than Jim Marsden. Walking back up to camp the smell of 80/90 transmission oil told me that they hadn’t come back down to have a picnic by the side of the track. A broken, and unfortunately unrepairable gearbox means that the Gigglepin team get a holiday instead of a race…

Tomorrow there are 2 laps, Sunday 2 more. Weather is supposed to be as good as it was today. Results are on the same level as electric, wifi, food and sleeping arrangements for the press but it seems the local Roberto Ciani was 2 seconds faster than Levi with Axel Burmann in 3rd.

The inside story of the King of the Hammers - part 4