Four MINI ALL4 Racing vehicles to make the trip to Hungary 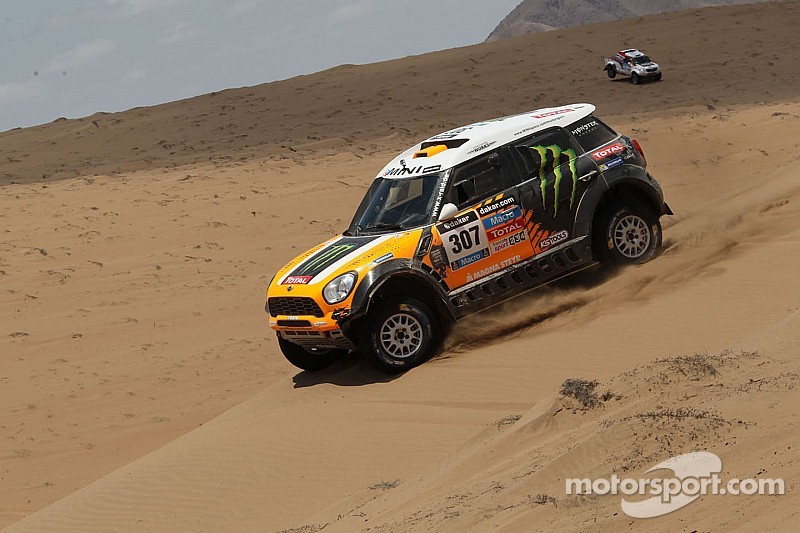 Following the sensational one-two-three-four they celebrated about a month ago in the Baja Aragon, the Monster Energy X-raid Team and Team X-raid now are going to contest the Hungarian Baja. The Trebur based team travels to the Hungarian city Pápa, located about an hour from Lake Balaton, with four MINI ALL4 Racing vehicles. The Monster Energy X-raid Team colours will be represented by the pairings Orlando Terranova (ARG, in photo) / Bernardo Ronaldo Graue (ARG) and Krzysztof Holowczyc (POL) / Moi Torrallardona (ESP). With the Russians Vladimir Vasilyev / Konstantin Zhiltsov and the pairing Aidyn Rakhimbayev (KAZ) / Anton Nicolaev (RUS) two more MINI ALL4 Racing will be at the start.

In the Baja Aragon, Terranova and his team-mate Nani Roma battled it out for the win throughout the event. In the end, the Argentinean was just a few seconds behind Nani Roma and had to finishing second. This time, in the Hungarian Baja, Terranova wants to attack again. For his Polish team-mate Holowczyc it’s the third appearance, this year. He already contested the Dakar Rally in January and the Sealine Cross Country Rally in Qatar.

Meanwhile, Vasilyev has got another goal, in the seventh round of the FIA Cross Country Rally World Cup. The Russian currently is the World Cup leader with a 51-point lead over second-placed Yazeed Al Rajhi and a 65-point lead over Qatar’s Nasser Al-Attiyah who follows in third position. Vasilyev wants to extend his World Cup lead and with a win, he could add another 30 points to his tally. Rakhimbayev is going to make his third appearance at the wheel of the MINI ALL4 Racing. For the Kazakh, familiarising himself with his new racing car still represents the main ambition.

The two-day Baja will be started this Friday afternoon with the first 55.5-kilometre stage. On Saturday, the competitors will have to contest another four special stages. The first and the third with a distance of 73.5 kilometres, with 120.5 kilometres having to be covered in the second and the fourth.

Team Manager Sven Quandt: “With a total distance of about 600 kilometres, the Hungarian Baja is extremely short. So, you just mustn’t make any mistakes. Vladimir in particular must get through safely to keep on scoring points. It goes without saying that it would be perfect if he should succeed in extending his lead without having to take unnecessary risks.”

Orlando Terranova: “Some weeks ago in Spain I was just beaten by a few seconds but I’m going to again give my very best in Hungary. At the same time, the special stages are far shorter, here and therefore, even the slightest mistake could make a big impact. The MINI itself always worked fine, so far and therefore, our chances look bright.”

Vladimir Vasilyev: “We scored several points in Spain but we certainly could have secured a better result. Nonetheless, we mustn’t overdo it, here. Should we keep on securing top-three or top-four results, thing’s look promising, for us. With just two days, the Baja in Hungary is rather short and we have to focus on finishing without encountering any problems.”