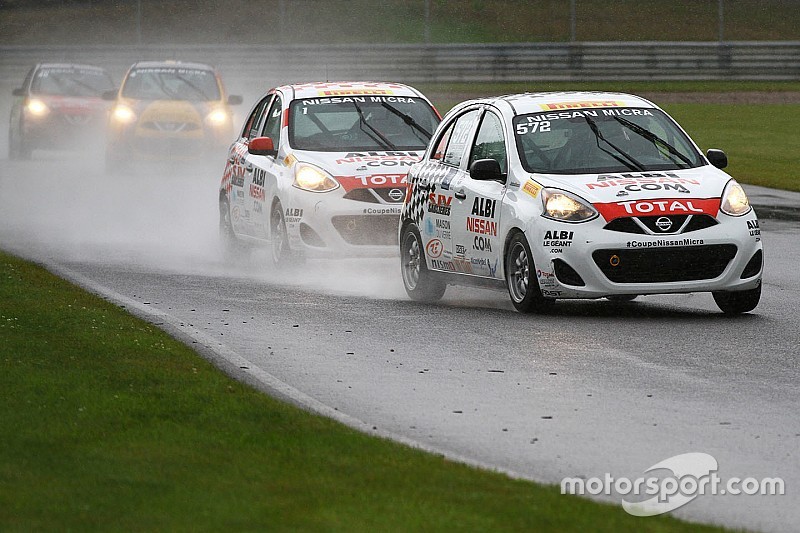 Held this past weekend as part of the Summer Classic at Circuit Mont-Tremblant, the ninth and 10th rounds of the 2016 Nissan Micra Cup alternated between extreme rain for Saturday’s race and scorching summer sun for Sunday’s race.

Sherbrooke, Quebec’s Kevin King earned the pole position for the first race, ahead of the 2015 champion Olivier Bédard and Valérie Limoges, who had her best qualifying finish in the series since she started last year. Albertan Stefan Rzadzinski and the series leader, Xavier Coupal, completed the top five.

Having kicked off under rain conditions worthy of a tropical storm, the afternoon race saw the competitors drive brilliantly through a significant amount of water. Despite the treacherous conditions and next to no visibility, no incidents occurred. The race was halted twice, including for a three-car collision that eliminated veteran Normand Boyer, Frédéric Bernier and rookie Stéfan Gauthier, who were battling for a spot among the top 10, two laps prior to the finish.

At the front of the pack, Kevin King led the first few laps before watching Olivier Bédard take over, ahead of his teammate Xavier Coupal. The order looked to be solidified, but three laps before the finish, Coupal was able to take the lead en route to his third victory of the season. Bédard finished in second place, ahead of Nic Hammann, the Nissan GT Academy driver and winner of the 2014 United States GT Academy. The young American, clearly comfortable in the rain, had his best race since starting in the series this past spring, climbing four positions to finish on the podium.

The following day brought completely different weather. To the delight of the spectators, sun was in the sky during the second race, an even more intense battle with no less than 10 leader changes in the 30 minutes of racing. The lead driver was Stefan Rzadzinski, who qualified on pole, followed by Olivier Bédard, Nic Hammann, Kevin King, Metod Topolnik and Xavier Coupal. Valérie Limoges was also part of the pack before her race ended following a collision.

At the end of the race, Coupal was crowned with a perfect weekend after winning his second consecutive victory. He beat out Bédard by only two-tenths of a second and Rzadzinski by six-tenths. Hammann finished in fourth, just ahead of King, who led for more than half of the race. Topolnik, Demers and Boyer rounded out the top eight.

Another exceptional battle took place for ninth place between Valérie Chiasson, Patrick Dussault, Jeff Boudreault and Frédéric Bernier. After succumbing to a DNF the previous evening, Bernier took revenge by claiming this hard-fought ninth place, ahead of Chiasson who took 10th spot from Dussault four laps before the finish. Boudreault finished 12th.

After the event concluded, race officials penalized four drivers with a 30-second penalty for avoidable contact, including Valérie Chiasson and Metod Topolnik. As a result, Jeff Boudreault secured a spot in the top 10.

In the drivers’ championship, Xavier Coupal remains solidly at the top of the standings with 324 points, ahead of Olivier Bédard (293), Stefan Rzadzinski (273), Kevin King (266), Valérie Limoges (222) and Marc-Antoine Demers (206). For the rookies, Ashley Sahakian and Stefan Gauthier claimed victory on Saturday and Sunday respectively, but Ontarian Peter Dyck remains in the lead of this class.