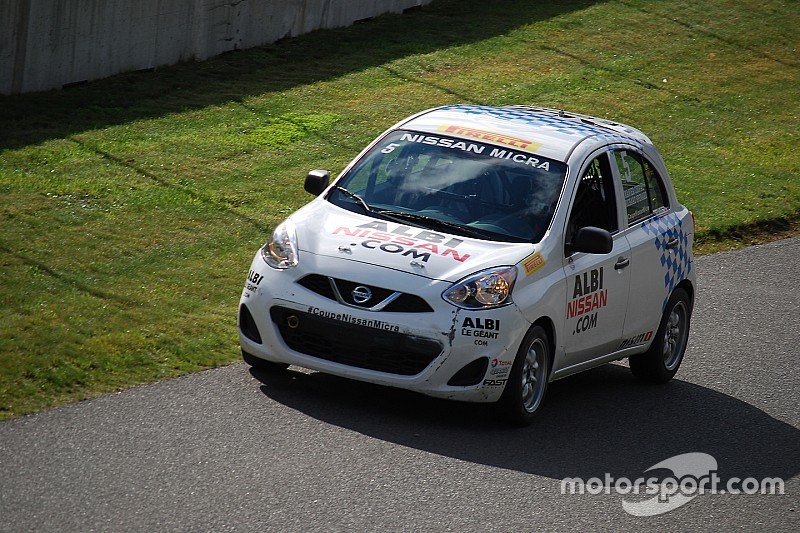 Xavier Coupal won the penultimate race of the Nissan Micra Cup Saturday at the picturesque Mont-Tremblant circuit in the Quebec Laurentians.

Coupal and his teammate Olivier Bédard shared the front row at the start of the 15-lap race, as Bédard won the pole with a time of 2:02.850.

Albertan Stefan Rzadzinski – who’s still in the hunt for the title – started in third place ahead of Valérie Limoges.

The 19-car field got the green and Bédard immediately powered in front of Coupal. Rzadzinski ran in third place in front of Kevin King and Limoges.

On lap 4, the two leaders had built a three-second advantage over their pursuers. One lap later, Rzadzinski and King traded places. Behind them, Limoges, Bertrand Godin, Jean-Michel Isabelle and Chris Sahakian followed, in that order.

On lap 8, a crash in the midfield caused a full-course yellow. The cars circulated at slow speed during four laps.

The race restarted on lap 12, with three to go. King ran with the leaders, Bédard and Coupal, and then started to lose ground. With two laps to go, Coupal overtook Bédard for the lead.

The final and decisive race will be held tomorrow afternoon and will crown the 2016 Nissan Micra Cup champion.