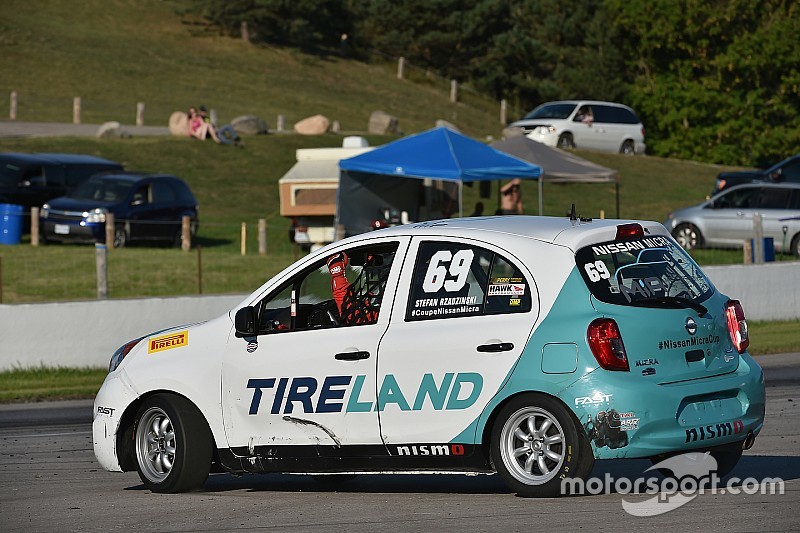 During Labour Day weekend at the Canadian Tire Motorsport Park in Ontario, the Nissan Micra Cup drivers competed in the second-to-last race weekend of the 2016 season.

Two races took place under scorching sun and heat, and in front of thousands of spectators who came together for the most important event of the year on this circuit, where the NASCAR Camping World Truck series was the headliner.

The Nissan Micra Cup saw two spectacular races, with many twists taking place over the course of the weekend. In the end, Xavier Coupal won the first race on Saturday, while Stefan Rzadzinski won the second race on Sunday.

Olivier Bédard, who had qualified in pole position, was leading the pack during Saturday’s race until Xavier Coupal surpassed him and claimed first place. Positions continued to change in every lap throughout the race, with Kevin King and Valérie Limoges losing their spots. A battle between Coupal, Bédard and Hammann, the Nismo GT Academy driver, started to develop during the last few laps but stopped abruptly when a yellow flag was waved due to an accident involving Yves Aubé.

The multiple shift in positions included many drivers behind the first three on the podium. Rookie Stefan Gauthier, driver of a perfect race, came in fourth place overall, followed by Ontarian Brian Makse. Both of these drivers secured their best results so far in the series.

The top six was completed by Pierre Clavet, who also fought very hard to get to the front of a very tight pack from the first to the last lap. Normand Boyer, Marc-Antoine Demers, Metod Topolnik and Aaron Povoledo, ex-member of Player’s Racing and debuting in the series this weekend, all finished in the top 10. Chris Sahakian and Valérie Chiasson, who started last after missing the qualifying session, managed to climb 16 positions and finish in 11th and 12th.

On Sunday, Bédard and Coupal once again started side-by-side at the front of the pack. Coupal, who began in pole position, had a perfect start, Bédard lost three positions and Nic Hammann fought for the first place against Coupal. Unfortunately, both drivers got caught in an incident one lap later and Bédard took back first place in front of Povoledo, Rzadzinski and Limoges. Halfway through the race, Stefan Rzadzinski took the second place spot and proceeded to fight for Bédard’s position. The Albertan driver managed to surpass Bédard two laps before the end, moments before Metod Topolnik’s accident which caused a yellow flag that lasted, like the night before, until the end of the race.

This was the second victory of the season for Rzadzinski, in front of Bédard and Limoges who won a spectacular fight with Povoledo for third place. Kevin King, Marc-Antoine Demers, Normand Boyer, Chris Sahakian, Pierre Clavet and Martin Gray completed the top 10. For the rookies, Stéfan Gauthier finished first during a race that saw more than 30 position changes!

In the drivers’ championship, Olivier Bédard leads with 434 points in front of Xavier Coupal (430), Stefan Rzadzinski (370), Kevin King (358), Nic Hammann (284) and Valérie Limoges (274). In the rookie championship, Stefan Gauthier is in first place, in front of Peter Dyck and Ashley Sahakian.

It was during this event at the Canadian Tire Motorsport Park that Staff Sergeant Chuck Kaizer participated, off-duty, in two races to promote Project E.R.A.S.E. (Eliminating Racing Activity On Streets Everywhere). His goal, as part of Project E.R.A.S.E., was to raise awareness about the dangers of street racing and to encourage safe, responsible driving on public roads and race tracks. Staff Sergeant Chuck Kaizer finished in 22nd and 23rd, respectively.

There is only one race weekend left until the end of the 2016 season, during which more than 40 drivers haven taken part so far. This last race weekend, which will feature the fifteenth and sixteenth races of the season, will take place on September 24 and 25 at Circuit Mont-Tremblant in Québec, during the Fall Classic.