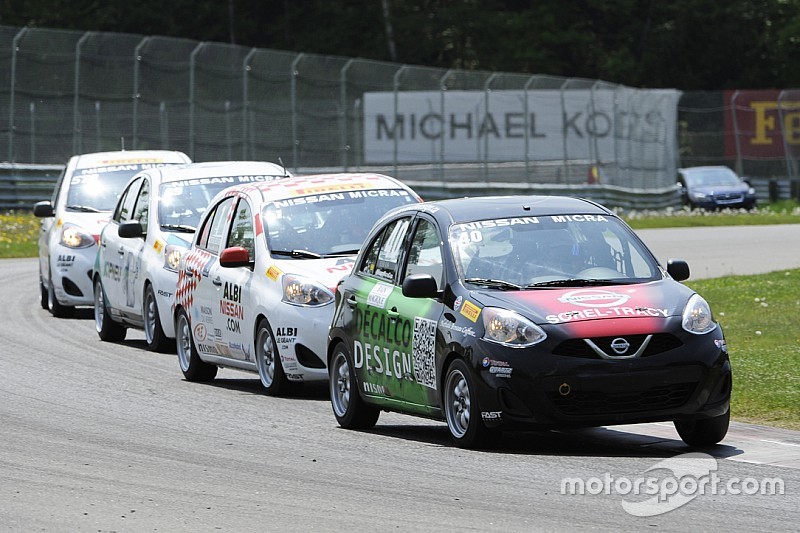 In warm temperatures, the Nissan Micra Cup made its return to the Circuit Mont-Tremblant with victories for Xavier Coupal and Kevin King

As we wrote Saturday, Kevin King crossed the line in first place at the end of race 1.

However, after reviewing on-board footage, series' officials stated that both King and Rzadzinski were guilty of making avoidable contact during the last lap. King received a 35-second penalty and Rzadzinski a 30-second penalty on their overall race times, dropping them far down in the final standings. Xavier Coupal was eventually declared the winner ahead of Valérie Limoges, giving the former single-seater racer his second consecutive win of the season.

On Sunday, reigning series' champion Olivier Bédard had pole position ahead of Stefan Rzadzinski, but it was Kevin King, starting in third, who quickly challenged Bédard for the victory.

The two former karting teammates provided a tight and respectable battle right until the end, which saw King earn his second win of the season. Bédard finished seventh-tenths of a second behind him, followed by Rzadzinski and Coupal, who has been penalized by series officials after the race and dropped to seventh place, which now slightly closes the gap in the drivers' championship.

In the drivers' championship, Xavier Coupal remains in the lead with 136 points ahead of Stefan Rzadzinski (105), Valérie Limoges (104), Kevin King (90), Marc-Antoine Demers (78) and Olivier Bédard (65 points, tie with Jacques Bélanger and Metod Topolnik).

For the rookies, Ashley Sahakian was the only driver competing this weekend and therefore earned both wins, further increasing her lead at the top of championship standings for this category.

King and Bédard share victories in the Nissan Micra Cup