NHRA teams always look forward to the challenge of the U.S. Nationals at the Lucas Oil Raceway in Indianapolis for their marquee classic event which locks up the top 10 for the Countdown to the Championship.

INDIANAPOLIS – The world’s most prestigious drag race, the Chevrolet Performance U.S. Nationals, is revved up to once again provide its traditional offering of the very best in high performance for thousands of hot rodding enthusiasts. Nearly 1,000 competitors in 12 different racing categories will perform in front of the standing-room only crowd during the much-anticipated Labor Day weekend classic.

The 59th annual running of the marquee event takes place at revered Lucas Oil Raceway at Indianapolis, Aug. 28-Sept. 2. It is the 18th of 24 events in the NHRA Mello Yello Drag Racing Series for 2013 and the final of 18 regular season races. Following this event, the top 10 drivers in each Mello Yello Series category will be locked in for the six-race Mello Yello Countdown to the Championship, NHRA’s six-race post-season playoffs.

Once again, the Chevrolet Performance U.S. Nationals will be showcased nationwide on ESPN2 and ESPN2HD during more than 10 hours of coverage. 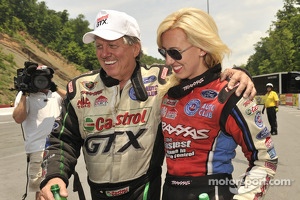 Each year during the Chevrolet Performance U.S. Nationals, fans are offered a glimpse into the past with several exciting attractions and numerous appearances by many of the sport’s greatest legends, and the 2013 edition of this tradition-rich event is no exception.

Throughout the weekend an incredible assortment of vintage hot rods will be on display in a special Hot Rod Junction Car Corral and numerous autograph sessions with the most prolific stars of the sport will be featured as well.

A special Track Walk also will be held, where prior to Monday’s pre-race ceremonies, many of the sport’s biggest stars will walk alongside fans down the historic dragstrip.

Fan-favorite Jet Cars and Wheelstanders will take to the track to make exhibition passes as part of Friday and Saturday’s racing activities. As usual, one of the highlights of the spectacular pre-race show on Monday will feature highly-skilled skydiver Jason Peters soaring into Lucas Oil Raceway with an American Flag in tow during the traditional performance of the National Anthem.

Throughout the years fans at Lucas Oil Raceway have cheered on drag racing immortals like “Big Daddy” Don Garlits, Shirley Muldowney, Bob Glidden, Tom “The Mongoose” McEwen and Don “The Snake” Prudhomme, as they raced to the winner’s circle and etched their names into the NHRA record book. Today’s stars – such as nine-time Chevrolet Performance U.S. Nationals Top Fuel winner Tony Schumacher, four-time Funny Car winner John Force and six-time Pro Stock winner Greg Anderson – will be racing with plenty of determination to continue to build upon their legacies. For many of the competitors, the race has evolved into much more than an annual contest of speed. For those who seek to become a part of its mystique, winning the event has become a vital component of a great driver’s resume. 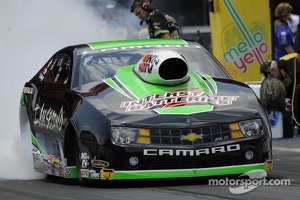 This year’s edition of the famed event will feature intense side-by-side racing as drivers in Top Fuel, Funny Car, Pro Stock and Pro Stock Motorcycle compete for their share of the $2 million purse and battle for important world championship points as the event is the final regular season race and will establish the top 10 fields for the Mello Yello Countdown to the Championship. Perhaps more importantly, drivers will compete to earn a permanent spot in NHRA history, as a Chevrolet Performance U.S. Nationals winner.

Teams in the NHRA Lucas Oil Series and the NHRA Pro Mod Series also will compete during the weekend. In addition, the world’s fastest Super Stock cars will race for bonus bucks and bragging rights during the intense Mopar HEMI Challenge.

Fans can get a taste of the excitement on Wednesday, Aug. 28th by attending the Chevrolet Performance U.S. Nationals Fan Fest, which will feature a display of race cars, live music, a huge jumbotron and plenty of giveaways at Monument Circle in downtown Indianapolis. The Fan Fest, which starts at 11 a.m., also will feature a premier autograph session with many of the top professional drivers in the NHRA Mello Yello Drag Racing Series. In addition, a press conference will be held during the Fan Fest, where several news announcements will be made and the random lottery drawings for the No. 8 spots in the Traxxas Nitro Shootout will be held.

The biggest, most historic and prestigious event in the NHRA Mello Yello Drag Racing Series, the Chevrolet Performance U.S. Nationals has been contested annually since 1955. Originally known as “The Nationals” and first held at an abandoned airstrip in Great Bend, Kan., the event made stops at Kansas City, Mo., Oklahoma City and Detroit before eventually moving to Lucas Oil Raceway at Indianapolis in 1961.

The Chevrolet Performance U.S. Nationals also will feature competition in all categories of the NHRA Lucas Oil Series, where the future stars of the NHRA Mello Yello Series are born. Lucas Oil Series qualifying begins at 8:30 a.m. on Wednesday, Aug. 28 and eliminations begin at 8 a.m. on Thursday, Aug. 29 and continue through Monday, Sept. 2.

NHRA’s popular Pro Mod touring series will make its seventh start of the 10-race 2013 season at the Chevrolet performance U.S. Nationals. The series features some of the world’s fastest and most unique doorslammer cars, with an eclectic mix of vintage and late-model body styles. The first qualifying session will be Friday, Aug. 30 at 5:30 p.m. Qualifying will continue on Saturday, Aug. 31 with sessions at 2 and 5:30 p.m. The final qualifying session will be Sunday, Sept. 1 at 2 p.m. and the first round of eliminations begins Sunday, Sept. 1 at 5 p.m. and will continue on Monday, Sept. 2 at approximately 2:30 p.m.