U.S. Nationals drama is a taster of what’s to come 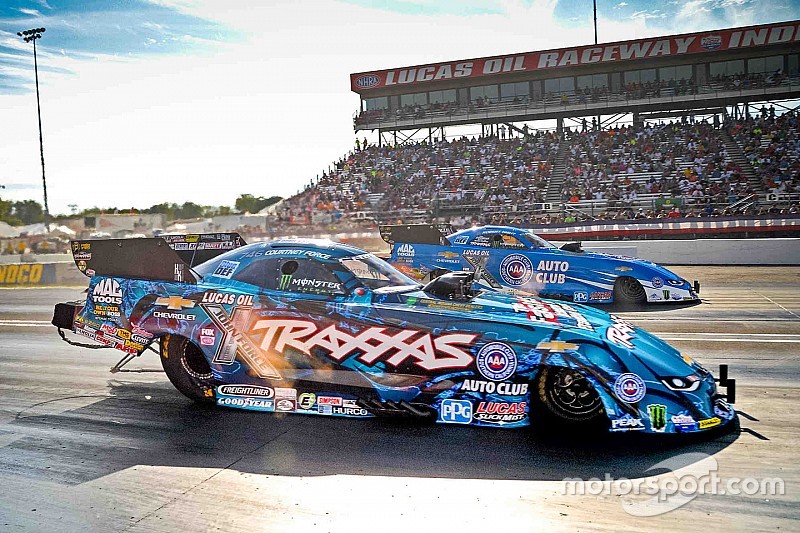 The Chevrolet Performance U.S. Nationals is a huge event in and of itself, but it also set the field for the six-race Countdown to the 2016 Championship. Annie Proffit looks ahead.

For the NHRA’s Mello Yello Drag Racing Series competitors, bringing home the Wally trophy at Lucas Oil Raceway outside Indianapolis means everything. Heck, even qualifying for this race isn’t easy: anyone who has a chance to make the field will come to this place and try, and so there’s always a surge in entrant numbers.

Recently it’s been tough to scavenge sufficient competition to make a full field of 16 for eliminations for the Mello Yello 24-race campaign. Racing at the top is always expensive and partnerships that work are often tough to find. But for the 62nd annual Chevrolet Performance U.S. Nationals, there were plenty of “go hard or go home” racers on the 261-acre premises. There were a healthy 20 Top Fuel dragsters, 19 Funny Cars, 19 Pro Stocks and 23 PS Motorcycles.

And so there was bumping in and out of the field and upsets that changed the scope of the six-race Countdown to the Championship playoffs that start in Charlotte next week. Because the Big Go at Indy is the biggest race of the year, it pays 1.5 points, has five qualifying sessions instead of four and takes four full days for the pro ranks to complete both qualifying (3 days) and the race.

As if it wasn’t already a big enough deal, the U.S. Nationals also closed the regular season and thus completed the field for the Countdown to the Championship, deciding the 10 drivers/riders eligible for the championships in the four pro categories.

With a holeshot victory, Tony Schumacher earned his 10th U.S. Nationals trophy in father Don Schumacher Racing’s Army Top Fuel dragster, edging always competitive Steve Torrence’s Capco Contractors’ rail in the finals. Two days earlier, Schumacher won the Traxxas Top Fuel Shootout; just about the only thing he failed to win this weekend was the No. 1 qualifier, which went to Clay Millican (3.692 sec), although he did set the top speed in qualifying (330.31mph). The victory by Schumacher gave him more wins at Indy than any other driver as he seeks a ninth championship and has now scored 82 wins in his 20-year career.

Despite his second-round loss to Schumacher, DSR teammate Antron Brown retains the No. 1 seed, with Doug Kalitta, Torrence, Schumacher, Brittany Force, J.R. Todd, Shawn Langdon, Millican, Richie Crampton and Leah Pritchett also qualified for the Countdown. Pritchett, who has endured a difficult season with regular team changes, left Terry McMillen on the outside looking in, by a single point decided in qualifying.

Ron Capps had the No. 1 seed in Funny Car wrapped up before the U.S. Nationals even started. Using a spare car after his Don Schumacher Racing Dodge Charger R/T rolled in the shutdown area in Sunday’s initial Traxxas Shootout run when his parachutes deployed late, Capps fell to 2015 champion Del Worsham’s Kalitta Motorsports Toyota Camry in the semifinals.

Worsham then lost to Capps’ teammate and No. 1 qualifier Matt Hagan with yet another holeshot victory in the Funny Car finals, but still moved from third to second in seeding, thanks in part to the extra points at Indy. The win was Hagan’s first in the U.S. Nationals but his team’s 10th in the Funny Car wars thus far this year. Perhaps surprisingly, it also meant it was the first time that DSR had won both Top Fuel and Funny Car at the Nationals.

In the six-race Countdown, Capps and Worsham will have to watch out for Hagan, Courtney Force’s Chevrolet Camaro (winner of the Traxxas Funny Car Shootout on Sunday), Jack Beckman (Charger), Robert Hight (Camaro), Tommy Johnson Jr. (Charger), John Force’s Camaro, Tim Wilkerson in his Ford Shelby Mustang – and Alexis DeJoria. Returning to racing after recovering from a fractured pelvis incurred in her Sonoma crash, DeJoria lost in the first round but was able to retain the No. 10 seed when fellow Camry driver Chad Head’s event ended in the second round of eliminations on Monday.

Jason Line of KB Racing/Summit Racing Equipment produced sufficient Pro Stock glory to lead the standings heading into the Countdown to the Championship. He and teammate Greg Anderson have enjoyed seven victories each in their Chevrolet Camaros thus far this season, and yet both were out by the end of Monday’s second round of eliminations – a true anomaly for this duo.

Instead, it was another Camaro pilot, Chris McGaha, holding the winner’s Wally trophy at the end of the day, after he defeated Denver winner Allen Johnson’s Dodge Dart. McGaha, who has a single-car entry (like Johnson), has been working intently on catching the Summit team whose early preparation in a newly configured Pro Stock arena in 2016 was head-and-shoulders above the rest of their competitors. As the season’s gone on, McGaha, Johnson and Vincent Nobile have caught up and brought more parity to the factory hot rod class.

Behind Line and Anderson, those qualified for the Countdown include their teammate Bo Butner, Johnson, Nobile, Drew Skillman, McGaha and Shane Gray, all in Camaros, along with two-time and reigning champion Erica Enders and her teammate Jeg Coughlin Jr., both driving Dodge Darts. So although the Line/Anderson axis won the first 14 events, they’ve been joined in the winner’s circle this year by Johnson, Skillman, Nobile and McGaha, which perhaps promises a closely fought title race through the Countdown.

The top of the Pro Stock Motorcycle championship table has a familiar look to anyone who’s followed the category over the past half-dozen years. Andrew Hines earned his fifth victory of the year at Indy, trailed by Harley-Davidson Screamin’ Eagle teammate Eddie Krawiec. Three-time champion Angelle Sampey, who red-lit in the second round at the U.S. Nationals, still holds third-place points on her Star Racing Buell, followed by Jerry Savoie’s Suzuki, the Suzuki of LE Tonglet, Chip Ellis, Hector Arana Jr, Hector Arana, Matt Smith and Cory Reed.

And so the fields have been set for the six-race Countdown to the Championship which begins next week at zMax Dragway outside Charlotte, North Carolina on September 15-18 and ends in Pomona, Calif., Nov. 10-13.