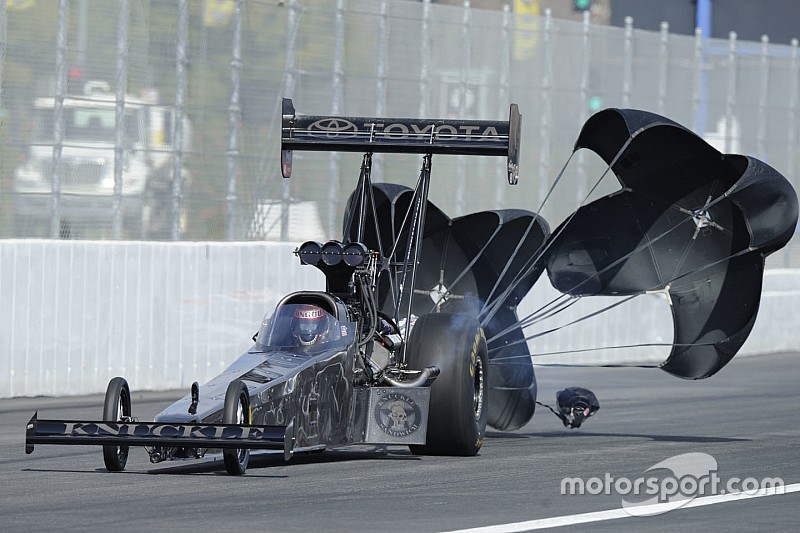 The NHRA Traxxas Nitro Shootout awards $100,000 to the winners in both the Top Fuel and Funny Car events.

Glendora, Calif. – As the first third of the 2015 NHRA Mello Yello Drag Racing Series season comes to a close, only one spot remains open for the eight-car Top Fuel field in the 2015 NHRA Traxxas Nitro Shootout. Two positions remain in the ultra-competitive Funny Car field with nine races remaining until the Traxxas Nitro Shootout will be contested during the Chevrolet Performance U.S. Nationals at Lucas Oil Raceway at Indianapolis.

While a large group of Top Fuel drivers will attempt to earn the seventh open spot in the Traxxas Nitro Shootout field and a competitive group will try to earn the sixth and seventh spots in Funny Car, there are seven racers in Top Fuel and nine drivers in Funny Car who will begin their campaigns for fan votes so they can position themselves to earn the coveted eighth positions, which will be determined by a combination of fan vote and lottery drawing.

The Top Fuel class has seen big names claim victory so far in 2015 as they prepare themselves for the specialty bonus race. Shawn Langdon, the 2013 world champ, punched the first ticket to the Traxxas Nitro Shootout with his season-opening win at Pomona. Eight-time and defending champ Tony Schumacher took a victory at Phoenix to qualify and he will be joined in the field by Don Schumacher Racing teammates Spencer Massey (Gainesville) and Antron Brown (Charlotte 1).

Richie Crampton, the 2014 Auto Club of Southern California Road to the Future Award winner and runner-up at the Traxxas Nitro Shootout last season, will compete again following his victory at Las Vegas. Perennial title and shootout contender Doug Kalitta is currently the No. 6 entry following his win at Houston.

The Funny Car category has been hugely competitive so far in 2015. Two-time and defending world champ Matt Hagan stamped his ticket early with the win at Pomona while teammate Ron Capps claimed a win at Gainesville to qualify. Jack Beckman, 2012 world champ and teammate to Hagan and Capps, won at Charlotte for the first time in two years to qualify again for the Shootout, an event he won in 2013. The defending winner of the Traxxas Nitro Shootout, John Force qualified again for the event following Las Vegas. Two-time fan vote winner and lottery winner Tim Wilkerson won’t have to worry about the fan vote this year as he qualified following his big win in Atlanta.

The fan vote process will determine how many lottery balls are assigned to each fan vote eligible driver for the random lottery drawing, which will take place at the Chevrolet Performance U.S. Nationals press conference/fan fest prior to the event.

Teams qualify for the NHRA Traxxas Nitro Shootout by winning an NHRA Mello Yello Drag Racing Series regular season event, holding the No. 1 spot in the standings after the event in Brainerd, Minn., or via a fan vote and lottery-style drawing. The NHRA Traxxas Nitro Shootout awards $100,000 to the winners in both the Top Fuel and Funny Car events. The program also awards the top four finishers in each event, with the runners-up receiving $15,000 and the semifinal losers $7,500.

The following drivers are qualified for the 2015 NHRA Traxxas Nitro Shootout: